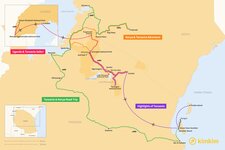 Tanzania is one of Africa's most popular safari destinations with its abundance of natural parks and unspoiled wilderness. And with two whole weeks, you can not only experience unforgettable wildlife excursions, like witnessing the Great Migration, but you can also embark on off-the-beaten-path adventures. If that's not enough, there will be time left to hop the border and visit Kenya and Uganda.

Experience the very best of Tanzania on a 14-day highlights tour that includes game drives in national parks, cultural exchanges with local tribespeople, and relaxing on tropical white-sand beaches.

You'll arrive in the northern Tanzania city of Arusha, which is an excellent base to explore the region's national parks. First up is a safari in the off-the-tourist-trail gem of Tarangire National Park, home to thousands of African bush elephants. Next, enjoy cultural tours in a farming community where all of Tanzania's 120 tribes live alongside each other. On day four, you'll embark on a 4x4 game drive around the Ngorongoro Crater, the largest intact volcanic caldera in the world. Its fertile plains are home to thousands of game animals, including the coveted Big Five: lion, leopard, elephant, rhino, and African buffalo.

Then head to Serengeti National Park. Over a few days, you'll explore this legendary wildlife reserve and see Big Five animals and herds of wildebeest, zebras, gazelles, and more. The trip takes a dramatic shift on day eight when you fly from Arusha to Zanzibar, the most beautiful island archipelago in East Africa. Not only will you visit Zanzibar's famous white-sand beaches, but you'll also enjoy activities like caving and cycling. The last stop is just north of Zanzibar and the smaller island of Pemba, known for its great snorkeling conditions and fertile valleys teeming with fruit trees. Learn more

Combine a trip to Kenya with Tanzania over 14 days of safari excursions in the legendary Serengeti and the neighboring Maasai Mara National Reserve.

This packed safari itinerary begins in Nairobi, Kenya's capital, which sits on its own national park, home to exotic wildlife. After visiting local giraffe and elephant sanctuaries, you'll head south to the Maasai Mara National Reserve, a 580-sq-mile (1,510-sq-km) game reserve that borders Tanzania and the Serengeti. Together, these locales host the Great Migration, an annual occurrence in which thousands of wildebeest, zebras, and gazelles migrate to new grazing grounds. Over a couple of days, you'll enjoy game drives across these savanna plains and see grazing wildebeests and big cats hunting for prey.

Then hop the border into Tanzania for a couple of days, relaxing at Lake Victoria. Here you'll go birding in the wetlands and take a mountain-biking tour of tribal villages. Leave the lake on day seven and spend time on game drives in the Serengeti before transferring to Ngorongoro. This area is not only home to exotic animals like black rhinos but over 40,000 Maasai tribespeople as well. Cap the trip with a stop at Lake Manyara National Park. The waters of this alkaline lake are a haven for countless pink flamingos, while onshore, you'll see African bush elephants and grazing giraffes. Learn more

Hop in a 4x4 and hit the road across mainland Tanzania, stopping at cities and towns most tourists never see while also visiting game reserves and camping with local tribespeople.

Before embarking on your road-trip adventure, spend two days soaking up the sun in Zanzibar and strolling its medieval Stone Town. Afterward, fly to Dar es Salaam, the largest city in the country. It's here on Tanzania's coast that your road trip begins. The drive will take you northwest across the country to Lake Victoria, stopping at the capital of Dodoma and the city of Shinyanga, home to the Sukuma, Nyamwezi, and Sumbwa tribespeople. Take a break from the road and explore the protected islands around the lakeside city of Mwanza, which are home to exotic waterbirds and a chimpanzee sanctuary.

From Mwanza, drive north to the port city of Kisumu to stay at an impala sanctuary. Then tour tribal villages and visit community projects like schools and a women's weaving center. Continue north into Kenya for a few days of game drives on the Maasai Mara. Spend the remainder of the trip in an authentic Maasai community to witness warrior training. Visit a women's village to see how Maasai widows support themselves through crafting and beadwork. The trip ends camping under the stars with the Maasai people and enjoying a traditional barbecue and campfire rituals. Learn more

Divide 14 action-packed days between the highland jungles of Uganda and the unspoiled savannas of Tanzania—complete with a hot-air-balloon safari over the Serengeti.

A day after arriving in Uganda's lakeside city of Entebbe, you'll fly to the country's far south and visit Bwindi Impenetrable National Park. Over two days, you'll embark on treks through the mountain rainforests to spot some of the last remaining gorillas in the wild—a truly awe-inspiring sight. After a cooking class in a tribal village, you'll head to Queen Elizabeth National Park, a protected area home to diverse ecosystems that include savannas, lakes, forests, and wetlands. On game drives, you'll see elephants bathing in rivers, lions hunting for antelope, and more.

Then cross the border to Tanzania for more safari fun on the Serengeti. But this is no ordinary game drive. Instead, you'll take to the sky in a hot air balloon and get a bird's eye view of the abundant wildlife below as the aerial route follows the Seronera River. Land-based game drives follow, as does a stop at the Seronera Region of the park, a network of river valleys home to many hippo pools. Transfer to Ngorongoro to spot more Big Five animals, then finish the trip in the off-the-beaten-path Tarangire National Park to see its thousands of bush elephants. Learn more

This epic adventure takes you to Tanzania, one of East Africa's most...

This 14-day journey covers the most astonishing natural wonders in...

Get ready for two weeks of game drives in Africa's most renowned safari...

The first part of this Tanzania adventure will take you on safari at...

You can't beat this itinerary for a trip that combines African cultural...
Tanzania Tours & Itineraries

Jonathan G.
Colorado, United States
"Tanzania and the national parks truly were unforgettable. Our driver / guide Living was great and PK Tours did a good job arranging everything. Bianca also w..." read more
Traveled to Tanzania as a family in June, 2018
Plan your trip to Tanzania
Customize your trip with help from a local travel specialist
Plan Your Trip