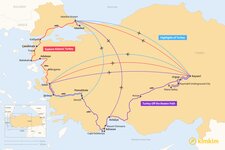 With 10 days, you can mix and match adventures to create the perfect vacation in Turkey. A highlights tour will take you from the Ottoman monuments of Istanbul to the fairy tale valleys of Cappadocia and down to the sun-kissed Aegean and Mediterranean coasts. Make a road trip out of it; visit ancient cities that predate the Bronze Age, and follow that with hikes around more "modern" archeological sites from the Greek, Roman, and Byzantine eras.

This 10-day exploration of Turkey's highlights will take you from the Ottoman and Byzantine landmarks of Istanbul to the rock-hewn churches of Cappadocia to the ruins of bygone cities on the Aegean coast.

Your epic adventure begins in Istanbul, a melting pot of cultures due to its location on the Bosphorus Strait. You'll discover Istanbul's long history and rich cultural heritage on tours by foot and boat that will take you to dynamic neighborhoods like Galata and the Old City. This historic enclave is home to some of Istanbul's most famous monuments, including the 6th-century Hagia Sophia Mosque and the Grand Bazaar. Next, you'll fly south to Cappadocia, a stunning locale due to its lunar-like valleys dotted with towering volcanic rock formations, for a sunrise balloon tour. You'll also see the underground city of Kaymakli.

Then you'll fly to the stunning Aegean coast and spend time in charming hillside villages with Ottoman architecture. This is the gateway to Ephesus, an ancient city and Unesco World Heritage site dating to the 10th century BCE. Here you'll tour well-preserved ruins like the Temple of Artemis, the 24,000-seat amphitheater, and the Library of Celsus, a funerary monument built in the 2nd century CE. End the trip in style with a visit to Pamukkale, known for its terraced thermal pools and ancient Roman spa city. Spend a day soaking in these rejuvenating waters before flying home on day 10. Learn more

This 10-day adventure focuses on the myriad ruins of ancient cities found all over Turkey, some of which date to before even 10,000 BCE.

You'll get your first taste of Turkey's long historical legacy when you arrive in Istanbul. See historic landmarks like its 19th-century cable car (the oldest in Europe) and Galata Tower, a watchtower built in the 14th century. You'll also tour the Old City and see major monuments like Hagia Sophia and the 17th-century Blue Mosque. Afterward, transfer three hours west to the Gallipoli peninsula to tour famous battlefields from World War I.

Then it's time to visit the legendary city of Troy. The famous siege immortalized by Homer in his epic poems took place in the 13th century BCE, but the actual settled history of Troy dates to around 8,000 years before that. After, you'll tour Pergamon, the remains of an ancient Greek city whose heyday was in the 3rd century. Following Pergamon is a stroll around the 1,030 acres of Ephesus. It's the site of early Christian history in that Mary came here with St. John, who spent several years in the region. You'll return home after traveling to Cappadocia and hiking its lunar valleys. Learn more

Itinerary #3: Turkey Off the Beaten Path

To see the best of Turkey while enjoying some adventures in the great outdoors, embark on this 10-day road trip and nature hike.

For this itinerary, you'll arrive in the Mediterranean resort city of Antalya. The Kaleiçi (Old Town) neighborhood is filled with historic landmarks like ancient mosques and a triumphal Roman arch dating to the 2nd century BCE. This region also comprises Turkey's stunning Turquoise Coast, which encompasses the provinces of Antalya and Muğla. All 335 miles (540 km) of the famous Lycian Way hiking route also follow this section of the Mediterranean coast. After a brief trip to Mount Chimaera to see its perpetually flaming gas vents, you'll arrive in the seaside town of Adrasan to start your two-day hike.

Highlights include hiking the Taurus Mountains and visiting the ruins of Olympos, an ancient Lycian city that dates to around the 4th century BCE. On day four, take a drive to Pamukkale to soothe your muscles in the thermal pools at Hierapolis, then head back near the coast for a tour of Ephesus to see famous ruins like the Temple of Artemis. On day seven, travel to Cappadocia to visit underground cities plus take a traditional Turkish cooking class. A road trip back to Antalya makes a pit stop at the 7,000-seat Aspendos Theater (built in the 2nd century), and on day 10, you'll fly home. Learn more

Experience Turkey from east to west on this adventurous 10-day...

Over 10 packed days, you'll experience the highlights of Turkey, from...

Experience the full breadth of Turkey's deep history on a 10-day...