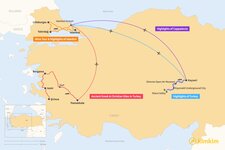 A five-day tour of Turkey is enough time to discover Istanbul's highlights and visit ancient ruins dating to the Bronze Age. But those aren't your only options—you could also embark on a wine tour through Thrace, a grape-growing haven since the 3rd century BCE. And you certainly don't want to miss a trip to Cappadocia and its enchanting lunar valleys or a quick stop at the Pamukkale hot springs to soak in Roman baths.

This 5-day Turkey adventure allows you to experience the best of Istanbul and the famous lunar valleys of Cappadocia in the most efficient timeframe.

You'll arrive in the historic and culturally rich city of Istanbul. Located on the Bosphorus Strait, this bridge between the Asian and European continents is a melting pot of cultures. You'll see this reality on a walking tour of the Old City to marvel at incredible Byzantine monuments like the Hippodrome and the 6th-century Hagia Sophia Mosque. Then visit the Grand Bazaar, which is the largest covered market in the world at 333,000 sq feet (30,700 sq meters). Be sure to sample Turkey's incredible cuisine at one of the many restaurants around Taksim Square and the lively Galata neighborhood.

After Istanbul, you'll fly to Cappadocia, a region in the plains of southwest Turkey. It's known for its beautiful valleys dotted with towering volcanic rock formations sculpted by wind and erosion over millennia. These lunar valleys and otherworldly rock towers are best viewed from above in the basket of a hot air balloon—an adventure you'll get to enjoy on day four. Besides hiking the valleys, you'll also tour an open-air museum that features Byzantine churches cut right into the rock walls. An added bonus is a trip to an underground city built by early Christians to escape religious persecution. Learn more

This quick tour of Turkey's most famous ancient cities also includes stops at various sites that were once home to the seven churches of the Christian Revelation.

You'll arrive in the city of Denizli, which is the base for excursions to the nearby springs at Pamukkale—one of the highlight natural wonders of Turkey. Here you can take a dip in the terraced hot springs as well as soak in the thermal pools at the nearby Roman spa city of Hierapolis. From there, travel to nearby archeological site, Laodicea (also known as the City of Zeus), for a walking tour. The stunning ruins of this ancient city date to the 3rd century BCE and include a Greek temple, public baths, and colonnaded streets.

Then hit the road north to visit more historic sites like the town of Philadelphia. It was known as Alaşehir back in 189 BCE and is home to the sixth church of the Revelation. After seeing the ruins of ancient Lydian kingdoms, you'll stop at Thyatira, a city dating to 290 BCE that's home to the fourth church of the Revelation. Up next are the Unesco World Heritage Sites of Pergamon and Ephesus. These cities were founded in ancient Greece and feature some of the most incredible ruins in the country, like the Great Altar of Pergamon and the Library of Celsus. On day five, you'll depart Turkey. Learn more

Discover the lesser-known but no-less wonderful viticulture region of northwest Turkey on a 5-day wine tour that includes seeing the best of Istanbul.

Not only does Turkey's northwest Thrace region rival Europe's most famous wine-producing countries, but it has also done so for around 3,000 years. You'll discover Thrace's rich terroir on a drive from Istanbul to this area bordering Europe, where you'll stop at some local family-run wineries in historic cities and towns. These include Lüleburgaz, a center of viticulture since the 3rd century BCE. Then head to the beautiful Black Sea coast and the mountain town of Vize to sample cabernets, pinots, merlots, and others.

You'll also glean insight into the region's history (which dates to the Bronze Age) when you visit an ethnographic museum in the coastal city of Tekirdağ. From there, you'll return to Istanbul to tour Ottoman and Byzantine landmarks like the 14th-century Galata Tower and the Gaudi-esque Camondo Steps. Cap the trip with a 2-hour boat tour along the Bosphorus to marvel at the minarets and ancient buildings that combine to make this one of the world's most incredible skylines. Learn more

This 5-day outdoor (and underground) adventure focuses on the majesty of Cappadocia and its myriad wonders, both natural and human-made.

You'll fly into the city of Kayseri, which is the hub for excursions into Cappadocia. A driver will transfer you to your hotel in one of the area's towns, which often have homes and businesses carved right into the rocks. After checking in, you can enjoy a sundowner as you look out over Cappadocia's famous lunar valleys with a glass of Turkish wine in hand. Get up early on day two for the highlight adventure of the entire region: a sunrise hot-air balloon ride. This excursion lasts a glorious three hours, during which time you'll enjoy the best vantage point to snap plenty of photos of Cappadocia's valleys.

After the balloon, you'll tour the Göreme Open Air Museum, whose rock-hewn, Byzantine churches are decorated with breathtaking frescoes. Before visiting the Kaymakli Underground City to explore the vast network of tunnels and caves created by ancient Christians, you'll attend a traditional whirling dervish ceremony. This religious ritual dates to the 13th century and was created by a Sufi Islamic mystic. It's a form of meditation through dance in which performers spin in rhythmic patterns, clearing their minds as they commune with God. After hiking the lovely Ihlara Valley, you'll return home on day five. Learn more

History buffs can revel in ancient Greek, Roman, and Christian...

Even in as few as five days, you can see two highlights of Turkey in two...

The ancient world comes to life on this whirlwind, 5-day journey through...
Turkey 5-Day Tours & Itineraries