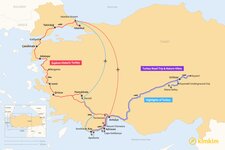 Two weeks in Turkey gives you carte blanche to explore high and low, from the historic streets of Istanbul to the lunar valleys of Cappadocia to the sun-kissed Turquoise Coast. You can even take a road trip to historic sights that includes the ancient cities of Ephesus, Pergamon, and legendary Troy. Round out your holiday with relaxing soaks in natural thermal pools, tour World War I battlefields, and hike the scenic Lycian Way.

This 2-week immersion into Turkey's culture, history, and natural wonders will take you from the plains of Central Anatolia to the sun-kissed coast of the Mediterranean to historic Istanbul.

Get ready for the full Turkey experience, which begins in Cappadocia, in the Central Anatolia region. These plains are famous for their otherworldly lunar valleys dotted with unique volcanic formations, which you'll see from above on a hot-air balloon ride. After hiking the area and touring its ancient Byzantine churches, cave dwellings, and underground cities, you'll take a road trip west to the Mediterranean coast, stopping at the 2nd-century Aspendos Theater. Then, once in Antalya, you can go offshore wreck diving plus tour ancient Termessos, which even Alexander the Great couldn't conquer.

Continue driving along the famed Turquoise Coast to the charming seaside town of Kaş. Enjoy nearby golden beaches and explore dive sites just off the old harbor. Then stop at the ancient city of Xanthos (it dates to the 8th century BCE) before ending the day at the terraced thermal pools of Pamukkale, one of Turkey's natural wonders. After soaking in the historic Roman spa baths of Hierapolis, you'll fly to Istanbul, a lively melting pot of cultures. You'll tour Istanbul on foot and by boat, as you visit districts like Galata and tour Old City landmarks like the Blue Mosque and awe-inspiring Hagia Sophia. Learn more

This 2-week holiday focuses on the historical highlights of Turkey, which run the gamut from ancient Hellenistic, Roman, Byzantine, and Ottoman cities to the more recent sites of World War I battles.

You'll arrive in Istanbul and head west to Turkey's northwestern peninsula of Gallipoli, which was a hotly contested World War I battlefront. Tour battlefields and enjoy a wine tasting, then venture further back in time to marvel at the ancient cities along Turkey's Aegean coast. First is Troy, which was settled in 3000 BCE and immortalized in Homer's epic poems. Next is the hillside archeological site of Pergamon, whose heyday was in the 2nd century BCE. Then tour Ephesus, which dates to the 10th century BCE and is home to incredible monuments from the Hellenistic, Roman, and Early Christian periods.

After visiting charming coastal villages, you'll drive to Pamukkale to Indulge your inner Roman emperor with a dip in the thermal pools at Hierapolis. Return to the coast, this time taking a tour of Antalya's Old Town, whose highlights include ancient Roman ruins dating to the 2nd century. Then you're off to Adrasan, a nearby coastal town where you'll take boat tours to secluded beaches. This itinerary also ends in Istanbul. Here, you'll visit historic markets like the Spice Bazaar and Grand Bazaar and enjoy incredible views of the city while on a boat tour down the Bosphorus. Learn more

Get active on an unforgettable 14-day hiking adventure along Turkey's Lycian Way coastal trail, plus mix in a road trip to Cappadocia and a boat tour to a lost underwater city.

Warm up for your coastal trek by hiking around the lunar valleys of Cappadocia. Then tour the Göreme Open Air Museum, home to rock-hewn churches and Byzantine landmarks. You'll also roam the tunnels of the Kaymakli Underground City, which was built by early Christians escaping Roman persecution. After taking part in a cooking class and enjoying a hot air balloon ride, you'll hit the road toward the Turquoise Coast, stopping at the Aspendos Theater as well as the town of Sultanhani, which is a famous pilgrimage site for Muslim mystics (and hosts Turkey's famous whirling dervish ceremonies).

Upon arrival in Antalya, you'll embark on the Lycian Way trek. The name comes from the Lycian League, which ruled over this coastal area in the 2nd century BCE. The trail runs 335 miles (540 km) around the Tekke Peninsula. Days eight and nine follow mountain trails around the ruins of Lycian cities like Phellos and Apollonia, and on day 10, you'll take a boat to Kekova Island. In the clear waters you can see the submerged remains of ancient Simena. You'll hike various mountains in the remaining days, including Chimaera, which is famous for its perpetually flaming gas vents. Learn more