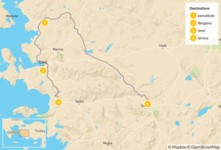 History buffs can revel in ancient Greek, Roman, and Christian archeological sites on this 5-day tour through western Turkey. Begin with a relaxing dip in natural hot springs in the Roman baths at Pammukale, then take a road trip to see the locations of the seven churches of the Revelation. Other highlights include walking tours of ancient cities like Pergamon and Ephesus, plus a relaxing night in the Ottoman village of Şirince.

Welcome to Turkey! You'll fly into Denizi, located in the southwest of the country. This city is the gateway to nearby Pamukkale, a town best known for what might be the most stunning natural wonder in the entire country: its collection of terraced thermal springs. Upon arrival at the airport, a driver will be waiting to transfer you to your hotel in Pamukkale.

Along the way, you'll stop in Laodicea for lunch and some sightseeing. Originally called the “City of Zeus,” Laodicea is an ancient city on the Lycus River whose heyday was in the 3rd century BCE, although remains found here date its history back to 5500 BCE. You can tour the ruins of an ancient Greek temple, public baths, and the remains of a colonnaded street. You’ll also visit the first church of the seven churches of the Revelation featured in the biblical book of John.

After the tour, you'll continue your drive to Pamukkale, where you’ll check in to your hotel and drop off your luggage. You'll then have the rest of the day free. If you're a little stiff after all that traveling, you should visit nearby Hierapolis. This ancient Roman spa city was founded around 190 BCE and, besides the ruins of an amphitheater and necropolis, is home to the famous Antique Pool. The pleasantly warm waters of this natural thermal bath are great for a soak, plus it's full of submerged marble columns from the nearby Temple of Apollo.

After breakfast, you'll head over to Pamukkale's thermal pools. The name translates to "cotton castle," and once you see it you'll understand why. The landscape comprises mineral forests, petrified waterfalls, and terraced basins formed by calcium waters that cascade down from a 656-foot (200-m) cliff overlooking the plain. Some of these terraced pools are even open for swimming.

After a pleasant soak and a break for lunch, you'll hit the road on a 3.5-hour drive northwest toward the coast and the town of Bergama. At around the halfway point, you'll stop briefly in the town of Philadelphia. Known as "Alaşehir" back when it was founded in 189 BCE, it's home to the sixth church of the Revelation. Continue driving to the modern city of Sart, which was once the ancient city of Sardis, the capital of the Lydian kingdom of the 7th Century BCE. Here you'll see fascinating ruins like the Temple of Artemis, Roman baths, and a large Jewish synagogue from the Roman period.

In the afternoon, you'll pass the archeological site of Thyatira, which is the fourth church of the Revelation, on your way to Bergama. When you arrive, you'll check in to your hotel and will have the evening free. This city is the base for exploring nearby Pergamon, one of the most stunning archeological sites in Turkey. So rest up, because tomorrow you're going to spend a few hours walking around Pergamon's 220 acres.

After breakfast, you'll head out to visit the nearby ruins of the ancient Hellenistic city of Pergamon. Its golden age was during the 3rd and 2nd centuries BCE, during which time it was a major center of science and education. A UNESCO World Heritage Site, the exceptional monuments here are a testament to that legacy and include a large amphitheater, the Great Altar of Pergamon, and the Temple of Trajan, built for emperor Trajan in 125 CE after he was deified by the Roman Senate.

In the early afternoon, you'll drive about 1.5 hours south to the lovely coastal city of İzmir, which the Turks refer to as "the pearl of the Aegean." Historically this was the ancient Greek city of Smyrna, and on a guided tour you'll see ruins within the city as well as the 17th-century Saint Polycarp Church, which was built in honor of the bishop of Smyrna. After the tour, you'll check in to your hotel and will have the rest of the evening free to explore the city.

In the morning, a driver will pick you up at your hotel for the ride 50 miles (80 km) south to the site of the ancient city of Ephesus. This 1,030-acre archeological site is home to a wealth of history and is a well-preserved testimony to Hellenistic, Roman, and Early Christian periods. As you explore this ancient city on a guided walking tour, you'll see sites like the massive Great Theater, which once seated 25,000 and was the site of the riot from which Paul escaped. There's also the impressive Library of Celsus, the ruins of the Temple of Artemis, and the House of Virgin Mary, where Mary may have spent her last days.

After the tour, you'll hop back in the car for a short drive up into the coastal foothills and the town of Şirince. Şirince is a small town of just 600 people known as a major producer of olive oil, peaches, and grapes—but tourism is a big draw too. People flock from all over to experience this charming town and its impressive Ottoman-Christian architecture. You'll definitely want to visit the colorful town center where you'll find numerous artisanal shops and vendor stalls.

It's time to say goodbye to Turkey! After a leisurely breakfast, a driver will pick you up at your hotel at the appropriate time and you'll be transferred to the airport in İzmir for your flight home.

History buffs can revel in ancient Greek, Roman, and Christian...

The ancient world comes to life on this whirlwind, 5-day journey through...

Even in as few as five days, you can see two highlights of Turkey in two...
Turkey 5-Day Tours & Itineraries