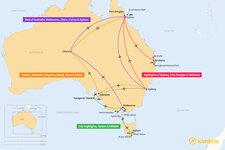 Thirteen days is enough time to explore 3-4 regions of Australia. See the best of the country, which includes Melbourne, Uluru, the Great Barrier Reef, and Sydney, or swap Melbourne for Adelaide and nearby Kangaroo Island. Or, opt for a three-region trip and stick to the east coast to see Sydney, Brisbane, and Port Douglas—jumping off point to Daintree Rainforest and the Great Barrier Reef. Lastly, there's south Australia to consider, a combination of the above, plus beaches, rainforests, and wildlife of Tasmania.

An excellent introduction to Australia if it's your first time visiting, this 13-day best-of tour has you covered. You'll hit top destinations, including Sydney, Uluru, the Great Barrier Reef, and the Great Ocean Road, as well as explore Cairns' rainforest.

Welcome to Australia! Begin your trip in Melbourne with a tram tour of the city's highlights before heading down the Great Ocean Road, where you'll drive past seaside bluffs and coastal mountain ranges. Then head to Phillip Island, home to the world's largest colony of little penguins. Back in Melbourne, you'll explore galleries, shops, and some of Australia's premier sports arenas. Next, you'll fly to the sacred First Nations land of Uluru (Ayers Rock), where you'll hike, sightsee, and eat an alfresco dinner among an LED art installation laid out 527,431 square feet (49,000 sq m) in front of Uluru as night falls.

After flying to Cairns, you'll choose from several options to explore the city, followed by taking the historic Kuranda Scenic Railway and visiting a koala sanctuary. Then you'll go boating and diving in the Great Barrier Reef among some 1,500 fish species. On Day 10, you'll travel to Sydney to visit attractions like Bondi Beach, the Opera House, and Taronga Zoo. Your trip ends with an excursion to the UNESCO World Heritage Site of the Blue Mountains, where you'll visit a farm and hike to a botanic garden before heading to your outbound flight from Sydney. Learn more

Another classic introduction to Australia, this 13-day itinerary swaps out Melbourne for Adelaide. It offers some of Australia's best culture, wine, and wildlife that starts in Sydney and Adelaide before taking you to Kangaroo Island, the outback, and the Great Barrier Reef and rainforests of Cairns.

You'll have three days in Sydney to explore the city's beaches, harbors, and cultural institutions like the Sydney Opera House. From there, head to Adelaide to experience some of Australia's best wines and spirits, followed by a venture to Kangaroo Island on Day 5. Here, you'll visit wildlife reserves, meet sea lions, and explore Remarkable Rocks, a natural sculpture perched on a dome of granite rising from the sea, before returning to Adelaide on Day 6

Next, catch a flight to iconic Uluru to see rock formations long considered the country's most famous natural wonder, take an art class focused on traditional First Nations art techniques, and eat an alfresco dinner with an impressive LED art installation before you. On Day 9, you'll board a flight to tropical Cairns for four nights, spend a day boating and diving in the UNESCO-protected Great Barrier Reef and embark on a rainforest adventure in Daintree National Park. Learn more

Plan your trip to Australia
Chat with a local specialist who can help organize your trip.
Get Started

This highlights tour, though action-packed, splits your time equally among three popular regions allowing you to see Sydney, Port Douglas, Brisbane, and their surroundings in-depth. From waterfront bike rides in Sydney and First Nations welcoming ceremonies in Daintree to Australia's "Green Cauldron" in Springbrook National Park, there's action, culture, and nature to cover all interests.

Your adventure will start in Sydney. You'll explore famous sites like the Sydney Opera House and take a cycling tour to landmarks like the Royal Botanic Gardens and Parliament House. Next, you'll visit the Blue Mountains, where you'll hike the famous Govetts Leap and stroll among hundreds of plant and animal species at an impressive botanic garden. Then it's back to Sydney for shopping, dining, and breathtaking city views from Harbour Bridge. Next, you'll fly to resort town Port Douglas to lie out on the golden sands of Four Mile Beach, check out Cape Tribulation, and snorkel epic Undine Reef.

On Day 7, you'll head to the traditional fishing village of Cooya Beach for an introduction to First Nations fishing techniques and explore the Daintree rainforest after a welcoming ceremony at Mossman Gorge. You'll then fly to Brisbane to explore its shops and parks and catch a view from Mount Coot-Tha. The famous Australia Zoo is next, where you can see over 1,200 native and exotic wildlife species. Your last day sees you in Springbrook National Park atop a 23-million-year-old volcano and cycling through Brisbane before catching your flight the next day. Learn more

Focusing on Australia's south, this itinerary balances time spent in urban centers, Sydney, Adelaide, Melbourne, and Hobart, with nature. See native wildlife on Kangaroo Island and little penguins on Phillip Island, and enjoy time spent on the island of Tasmania, including a nocturnal animal sanctuary tour.

You'll start your trip exploring the bustling seaside metropolis of Sydney, getting to explore sights from the Sydney Opera House to Bondi Beach and eating a multicourse Australian barbecue meal. On Day 3, you'll hike the nearby UNESCO World Heritage Site of the Blue Mountains before flying to Adelaide on Day 4 and getting to know its historic cathedrals, vineyards, and artisan food purveyors. Day 6 sees you journeying to Kangaroo Island for a full-day tour, widely considered the best place to see Australian wildlife in its natural habitat.

You'll fly to Melbourne next to take in some of the city's best cultural offerings on a tram tour and immerse yourself in the city's food, shopping, history, and sports. Then it's on to Phillip Island to see the adorable and famous Penguin Parade before catching a flight to Hobart on Tasmania in time for the Bonorong Wildlife Sanctuary night tour. On Day 11, you'll explore Bruny Island and sample its best cheese and beer, and visit the ancient Mavista Rainforest, followed by a historical tour of the early European settlement of Port Arthur the next day. Learn more

Looking for more inspiration for your trip to Australia? Check out these other 13-day Australia itineraries, with outdoor adventures, cultural trips, and best-of tours to hit the highlights.

Begin your journey in artsy Melbourne, exploring the hidden alleyways,...

Experience the best of the west on this two-week trip from Perth to...

Featuring an energetic mix of wildlife excursions and fun outdoor...

This 13-day adventure kicks off in Melbourne, which has officially been...

From discovering history and culture in the city to snorkeling among...
Australia 13-Day Tours & Itineraries

Make the Most of Your Time in Australia

How Many Days to Spend in Australia

When planning a trip to Australia, a 10-day trip is an ideal amount of...

Five days is a quick trip to Australia—you'll want to embark on a...

In seven days, you can see the highlights of three Australian cities,...

Ten days is a comfortable amount of time for an in-depth exploration of...

In two weeks, you can explore an average of four regions in Australia....
Make the Most of Your Time in Australia

January is mid-summer in Australia, and that means throughout the...

February is mid-summer in Australia, so temperatures across the country...

March in Australia is the first month of autumn, and while conditions...

April is mid-autumn in Australia, but as the country is so large and has...

May is the final month of autumn in much of Australia, but in the...
Australia Travel Advice

Kimkim has selected the best Australia travel agents so you'll have a...

June is the beginning of winter in southern parts of Australia, but the...

July is mid-winter in much of Australia and the middle of the dry season...

In two weeks, you can explore an average of four regions in Australia....

August is the last month of winter in much of Australia and the middle...

December is the first summer month in most of Australia (and the rainy...

Natural beauty is at the forefront of this three-week road trip through...

Australia is vast in size and offerings, but with 12 days to spend, you...

Ten days gives your family plenty of time to visit some of Australia's...

Three weeks on the east coast of Australia is enough to cover all the...