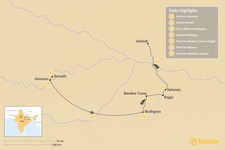 Take a spiritual journey through Buddhist India with this itinerary that will take you to some of the most important places in Buddha's life. The birthplace of Buddhism, India is home to some of the religion's most significant sites, including the place of Buddha's enlightenment at Bodhgaya, his first sermon at Sarnath, and last sermon at Vaishali, all easily accessed with a weeklong trip out of Delhi.

Welcome to India! Your trip begins in Varanasi, the oldest living city in the world. Also known as the city of temples, Varanasi is where Buddha is believed to have gone after attaining nirvana in search of his five disciples. The city is most accessible via a flight from Delhi.

You'll spend your first day in the city visiting its important landmarks and the bathing ghats (platforms down to the river). You can also add on a visit to the Manikarnika burning ghats, riverside cremation sites. In the evening, attend the Ganga Aarti at the Dashashwamedha Ghat.

Start your day with a boat ride on the Ganges river to enjoy the sunrise and the tranquility of the holy river and town. Once you're back on land, you'll visit the Sarnath Deer Park, where the Buddha gave his famous first sermon preaching the Middle Path to Nirvana. There are a number of other monuments, temples, monasteries, and stupas in the region that you can visit as well, should they pique your interest.

Take a short flight or a six-hour drive to Bodhgaya, considered one of the most important Buddhist places in the world. You'll have two days to explore this city and its many Buddhist monasteries, temples, and museums.

Continue your explorations of Bodhgaya today at your own pace. Pay a visit to the Mahabodhi tree under which Buddha gained enlightenment or the Mahakala Caves where Buddha came to realize the Middle Path philosophy. If you're in search of artistic creations, stop at the Buddha statue or the Buddha stone seat.

Make your way to Rajgir today, starting with a detour into the Barabar Caves. Travel through the Barabar and Nagarjuni hills to reach some of the oldest rock-cut caves in India, dating back to the 3rd century BCE, and admire their ancient polish and the resonant echo effects.

Continue to Rajgir, an important site for both Buddhism and Jainism as both Buddha and Mahavira are believed to have spent time there. Visit the Buddhist sites including Venuvana, the Vishwa Shanti Stupa, and Buddha's cave on Griddhakuta Hill. Then wash off some of the road dust with a dip in the hot springs at the Lakshmi Narayan Temple.

Drive to Nalanda this morning for a visit to the archaeological ruins of the ancient Buddhist university, one of the oldest and greatest universities in the world. Experience its grandeur and learn about its history as you walk amidst the ruins of stupas, temples, and monasteries.

Get up early on your last day to head to Vaishali, a small town set in the midst of rice fields, banana plantations, and mango orchards. Vaishali was the first place Buddha visited after leaving home and also where he gave his last sermon at Kolhu. The town is also important to Jainism, as it is believed to be Lord Mahavira's birthplace and home to the only complete Ashok pillar on earth, as well as some important stupas.

After you've finished exploring the area, you'll head to the airport to catch your flight home or on to your next adventure.

Explore some of the most incredible architectural wonders in India and...

This relaxing seven-day itinerary is the perfect way to explore Kerala...

Spend nine days in northern India, learning all about its food, culture,...

Perfect for travelers who would a balance of nature and city, this...
Best of Varanasi

Susan L.
Idaho, United States
"This was a lovely trip with my adult daughter--my fourth visit to India so many of the sites we saw I have seen before. Our guide in Jaipur was very good--I..." read more
Traveled to India as a family in January, 2023