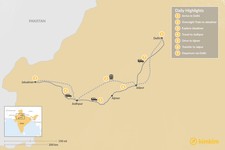 This seven-day tour of northern India is great for travelers who want to discover Rajasthan's fascinating culture and beautiful architecture. Visit the Golden City, ride camels through the desert dunes, stroll through the streets of the Blue City and more with this complete tour that includes stops in Delhi, Jaipur, Jaisalmer, Jodhpur, and Ajmer.

Once you arrive in Delhi, your guide will meet you for a traditional Swagat (or welcome), and take you to your hotel. After you check-in and get settled, you and your guide will go over all the details for your trip and make sure you have everything you need. You'll have the rest of the day free to relax or explore Delhi.

Day 2: Full Day of Sightseeing in Delhi and Overnight Train to Jaisalmer

In the morning, your guide will take you on a tour of "Old Delhi," where you'll see ancient monuments, narrow streets, and bustling markets. You'll pass the dramatic facade of the famous Red Fort and visit Jama Masjid, one of the largest mosques in India, which was built Shah Jahan—who also built the Taj Mahal—in1658.

Next, you'll visit Chandni Chowk, Old Delhi's most famous market. There, you'll be able to shop for gifts and souvenirs, as the market sells everything from saris to delicate silver jewelry. You'll get to ride a rickshaw through the market, which was the beating heart of Old Delhi in Mughal times when it was called Shahjahanabad. Your last stop in  Old Delhi will be Raj Ghat, a memorial to Mahatma Gandhi.

After lunch, you'll visit "New Delhi." First, you'll drive down the Rajpath, a ceremonial boulevard that passes in front of the government buildings of the British Era and was designed by Sir Edwin Lutyens. You'll see the India Gate—which was built as a memorial to the Indian soldiers killed in World War I—and the Presidential Palace.

In the evening, your guide will take you to the train station so you can board your overnight train to Jaisalmer.

Day 3: Tour Jaisalmer and Ride Camels in the Desert

First, your guide will meet you at the train station in Jaisalmer and take you to your hotel.

Then, you'll have the rest of the day to explore Jaisalmer, also called the "Golden City." This fortified city on the edges of the Thar Desert is known for its yellow stone architecture and massive towers.

You'll visit the beautifully-carved Jain temples and some of the city's magnificent Havelis (former merchants' mansions), including Patwon-ki-haveli (the largest) and Nathmalji-ki-haveli, which was built at the end of the 19th century.

Later, you'll be driven 25 miles (40 km) outside the fort to the Sam Desert, where you'll ride camels and watch the sunset over the sand dunes.

Day 4: Travel to Jodhpur and Explore the "Blue City"

After breakfast, you'll leave Jaisalmer and start the drive to Jodhpur, which is often referred to as the "blue city." Above Jodhpur, you'll see Fort Mehrangarh, the "Fort of Majesty," which dominates the landscape. Once you arrive, you can check in to your hotel and freshen up (the trip takes 6 to 7 hours).

In Jodhpur, you can explore the market that spreads out around the city's clock tower to shop for spices, grains, and tea. The stalls in the market also sell saris, jewelry, fruits, and vegetables. Walk around the city to see the many blue houses that give Jodhpur its nickname.

In the morning, you'll visit Mehrangarh Fort, which is located on a rocky peak above Jodhpur. Spend a few hours touring Mehrangarh, which is one of the largest forts in India. This architectural masterpiece sits nearly 400 feet (120 meters) above the plain and includes several intricately-sculpted palaces and a museum within its walls.

After visiting the fort, your driver will take you to Jaswant Thada, a white marble cenotaph built in memory of Maharadja Jaswant Singh II.

Then, you'll say goodbye to Jodhpur and drive to Ajmer (approx. four-hour drive).

After breakfast, you'll visit the Dargah of Khwaja Muin-ud-din Chishti. This is the tomb of a Sufi saint and was constructed during the Mughal period. People of all religions and faiths visit the tomb every day.

After the Dargah, you'll visit Adhai Din Ka Jhonpra, which is one of the largest mosques in India, and nearby Ana Sagar Lake.

In the evening, you'll drive back to Jaipur and check into your hotel there.

Day 7: Jaipur to Delhi and Departure

After breakfast, your driver will take you to Hawa Mahal (Palace of Winds) to see its beautiful facade and snap a few photos before continuing on the famous Amber Fort, 7 miles (11 km) outside of Jaipur. You'll spend a few hours touring this hilltop fort, then go back to Jaipur to see the City Palace, which is a perfect example of blended Rajasthani and Mughal architecture.

Later, you'll be taken back to Delhi for your flight home.

Explore some of the most incredible architectural wonders in India and...

This relaxing seven-day itinerary is the perfect way to explore Kerala...

Magic of the Golden Triangle - 8 Days

Delve a little deeper into India's amazing Golden Triangle on this...

Spend ten days exploring one of India's most popular regions with this...

This 10-day itinerary includes the three cities of India's Golden...
Best of Delhi