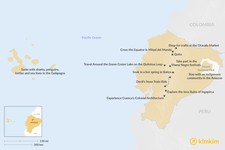 Ecuador boasts a remarkable range of landscapes, cultures, and ecosystems from the Amazon to the Andes and straddling the southern and northern hemispheres. From raucous festivals to wildlife encounters, historic cities to Inca ruins, colorful markets to dramatic train journeys, it has something for everyone. This article picks out 10 of the country's most memorable activities.

Ecuador's name derives from its position astride the equator, and just outside the capital Quito are a pair of monuments commemorating this fact. The official Mitad del Mundo (Middle of the World) complex was founded in 1936 and celebrates the eighteenth-century Geodesic Mission of French scientist-explorer Charles Marie de La Condamine. A line runs through the site to represent the equator (though, ironically, modern GPS technology has since revealed that the true equator line is actually 787 ft / 240 m south), bisecting a monolithic Mitad del Mundo monument.

There's also a planetarium, ethnographic museum, and regular music, dance, and cultural shows. Closer to the correct location (0° latitude, 0° longitude) is the privately-run Museo Intiñan, which has several fun equator-based experiments and displays. You can visit both sites on a half-day trip from Quito.

Founded by the Spanish in 1557, Ecuador's third-largest city is a treasure trove of well-preserved colonial architecture. Now a UNESCO World Heritage Site, the old town is a maze of narrow, cobbled streets, leafy plazas, elegant churches, and opulent townhouses. Among the highlights is the Catedral Nueva, with its white-and-pale-blue domes and lavishly gilded altar. Construction started in the 1880s and took almost a century to complete.

For most of the year, Latacunga is a quiet, relatively nondescript highland town. Twice a year, however, Latacunga lets its hair down and hosts the riotous Mama Negra festivals. These fiestas, held at the end of September and during the week of 11 November, are thought to commemorate either the expulsion of the Moors from Spain or the first encounters between the Indigenous population and African slaves brought over to work in the nearby mines. Regardless of their precise origins, both feature colorful costumes, raucous parades, cacophonous marching bands, lots of drinking – and plenty of opportunities for travelers to join in.

#4 Swim with Sharks, Penguins, Turtles & Sea Lions in the Galápagos

Almost 600 miles (1,000 km) west of the mainland and spread across 45,000 sq km of ocean, the volcanic islands of the Galápagos archipelago offer you close-up wildlife encounters with an incredible range of rare and endemic species. The waters are particularly rich, home to playful sea lions, graceful Pacific green turtles, and the only penguins found north of the equator, and offer some of the world's best snorkeling and scuba-diving. Swimming over a school of hammerhead sharks is a particularly spine-tinglingly experience.

Plan your trip to Ecuador
Chat with a local specialist who can help organize your trip.
Get Started

#5 Stay with an Indigenous Community in the Amazon

Ecuador's Amazonian region, known as the Oriente, is one of the most bio-diverse places on earth. An excellent way to ensure both a memorable experience and that your tourism has a positive impact is by staying at one of the many jungle lodges owned and run by the Indigenous peoples of the region, such as the idyllic Napo Wildlife Center in Parque Nacional Yasuní. Here guides from the Kichwa Añangu community show you their traditional way of life, lead you through jungle trails, and take you on caiman- and piranha-spotting canoe trips on a nearby lagoon.

#6 Shop for Crafts at the Otavalo Market

Every Saturday, the highland town of Otavalo plays host to one of South America's largest and liveliest markets. The bustling streets are filled with shoppers, tourists, traders, and artisans from across the region. Everything from livestock to pets, hammocks to jewelry are for sale, while the smell of hog roasts, crab soups, fried fish, and other delights fills the air. This area is particularly famous for its exquisite textiles, which make excellent souvenirs – though make sure you haggle before you buy.

#7 Soak in a Hot Spring in Baños

In the shadow of the active Tungurahua volcano, the small resort of Baños is famous throughout Ecuador for its thermal baths. After a hard day hiking, mountain biking, canyoning, horseriding, or whitewater rafting in the surrounding countryside, there are few better feelings than sinking into the soothing, mineral-rich waters of one of the town's piscinas.

#8 Travel Around the Green Crater Lake on the Quilotoa Loop

This spectacular 125-mile (200 km) circuit around Laguna Quilotoa, an emerald-green crater lake that, according to local legend, is bottomless, is a real highlight of the central sierra region. Providing some of Ecuador's finest Andean scenery, the Loop features a series of sleepy towns, rural markets, rugged cliffs and canyons, and plenty of hiking and horseriding opportunities (once you've acclimatized to the altitude). It can be done by bus, hire car (make sure you get a 4WD), or on a one- or two-day guided tour.

#9 Explore the Inca Ruins of Ingapirca

High on a hill overlooking the countryside, the Ingapirca site contains the country's finest Inca ruins. Although the Spanish dismantled much of the site, the magnificent Temple of the Sun (known as the Adoratorio) remains largely intact. Positioned so that it catches the sun during the solstice and once used for religious ceremonies, the structure today showcases the elaborate stone masonry for which the Incas are renowned.

#10 Ride a Train Over The Devil's Nose

The most dramatic section of the Trans-Andean Railway is La Nariz del Diablo ("The Devil's Nose"), an impossibly steep wall of rock between the stations of Alausí and Sibambe. A magnificent feat of engineering, completed in 1908, the railway climbs more than 1,640 feet (500 m) in less than 8 miles (12 km) of tracks. The journey offers you panoramic views and more than a few heart-in-the-mouth moments.

On the northwestern side of South America, straddling the equator,...

Best Things to Do in Ecuador

Ecuador boasts a remarkable range of landscapes, cultures, and...

Even with the tourism boom in Ecuador, there are still plenty of...

By South American standards, Ecuador is a fairly small country. Most...

Make the Most of Your Time in Ecuador

How Many Days to Spend In Ecuador

Ecuador is a country that packs enormous diversity into a small area, so...

Have just five days in Ecuador? No problem: it's one of the smallest...

Locals are fond of saying that Ecuador is four countries in one: coast,...

Two weeks in Ecuador gives plenty of time to enjoy all three of the...
Make the Most of Your Time in Ecuador

Best of the Ecuadorian Highlands - 7 Days

Traverse the very best of the Ecuadorian highlands on this 7-day...

This action-packed seven-day tour of Ecuador is perfect for travelers...
Ecuador Tours & Itineraries

It might be cool and wet when you arrive in Quito this month, but in...

Carnaval season brings its share of partiers in to places across Ecuador...

It's the end of high season on the coast, but low season in the...

Ecuador in May: Travel Tips, Weather, and More

It's all change in Ecuador this month, as the coast becomes grayer and...
Ecuador Travel Advice

Kimkim has selected the best Ecuador travel agents so you'll have a...

Locals are fond of saying that Ecuador is four countries in one: coast,...

Two weeks in Ecuador gives plenty of time to enjoy all three of the...

How Many Days to Spend In Ecuador

Ecuador is a country that packs enormous diversity into a small area, so...

See the highlights of Ecuador on this 13-day whirlwind tour. Start at...

Featuring activities from cycling to hiking to snorkeling, this exciting...

Experience the best of Ecuador's mainland on this exciting nine-day...

See the many faces of Ecuador on this epic, 13-day adventure that takes...

D
Diana H.
Canada
"When I set out to plan a 2-week family trip to Ecuador, I was a overwhelmed with the many awesome destinations, activities and adventures to chose from as we..." read more
Traveled to Ecuador as a family in December, 2022

Derral R.
Indiana, United States
"Our guide Ven was phenomenal and very attentive to all our needs. We also were very impressed with the vegetarian meals that the cook provided. We loved t..." read more
Traveled to Ecuador as a couple in January, 2023
B
Beth B.
Georgia, United States
"What a fabulous trip!!! Erika was wonderful to work with and designed the perfect trip for us. Everything went as planned. The customer service and respons..." read more
Traveled to Ecuador as a family in December, 2022

Vidya M.
New Jersey, United States
"The booking experience was very seamless and all details has been thought about and planned. Lucia was very responsive and quickly answered our questions. ..." read more
Traveled to Ecuador as a family in December, 2022

Jessica G.
Utah, United States
"We had a wonderful experience in Ecuador with Kimkim. Our guide Sebastian was simply wonderful: warm, helpful, and knowledgable. Our driver, Guillermo was ex..." read more
Traveled to Ecuador as a family in December, 2022

Lisa T.
Texas, United States
"This company is the real deal. I was skeptical to use a travel agent to book a trip but I am so glad I did. I found Kim Kim on a Facebook page and decided ..." read more
Traveled to Ecuador as a family in December, 2022

Michelle L.
Texas, United States
"Our Guayaquil guide, Corina and our driver, were amazing in their historical knowledge of the city and country, flexibility in the moment based on our intere..." read more
Traveled to Ecuador as a family in December, 2022

Jamie M.
Florida, United States
"Where to start and what to say is not easy because words can’t necessarily do justice to how amazing of a trip was planned for us and the excellent treatment..." read more
Traveled to Ecuador as a couple in December, 2022

Kelly B.
California, United States
"We had such a great experience with KimKim! The local guide and driver they connected us with were amazing. We felt like family at the end of the trip! In th..." read more
Traveled to Ecuador as a family in June, 2022

Kayla H.
Canada
"Our trip to Ecuador for our honey moon was incredible. We were incredibly impressed with every detail from the transport, the food, the scenery and our guide..." read more
Traveled to Ecuador as a couple in November, 2022
Create your custom-made trip to Ecuador
Get Started