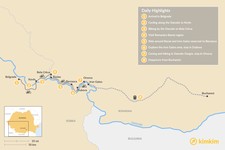 Hop on your bike and ride along the beautiful Danube River from Serbia to Romania on this week-long adventure. Enjoy the spectacular scenery as you cycle through remote villages in the foothills of the rugged Carpathian Mountains. You'll explore Belgrade and Bucharest, get a taste of rural life in Romania's Banat region, and venture into the caves of the stunning Danube Gorges.

Your trip starts in Serbia's capital city of Belgrade at the confluence of the Danube and Sava rivers. You'll have the day at leisure to explore the city on your own. Roam around the ruins of Kalemegdan Fortress and the accompanying park, which offers wonderful views of the city and rivers, or go shopping on Knez Mikhailova Street, Belgrade's main drag. Then stroll around the quaint cobblestoned streets of Skadarlija, the old Bohemian quarter, and try some traditional Serbian food at one of the neighborhood's many outdoor cafes.

Day 2: Cycling Along the Danube

Today you'll hop on your bike and set out for a 45-mile ride (73km) along the left bank of the Danube. The second longest river in Europe flows through ten countries, and once formed the border of the Roman Empire. Enjoy views of the rolling hills and green pastures as you cycle along the river. The terrain is relatively flat for most of the week, with a few short uphills and some sections of gravel road. Tonight you'll have dinner and sleep at a small guest lodge by the river in the historical town of Kovin.

Day 3: Biking by the Danube

Follow the current of the river eastward for your last day in Serbia. You'll make a short detour for lunch and visit a remote village for a home cooked meal with a lovely Serbian family. Enjoy majestic views of the river as you cycle past the authentic villages and bucolic farmland in the area. After a 31-mile (50 km) ride today, spend the evening relaxing by the many lakes and swimming holes in the beautiful resort town of Bela Crkva.

Plan your trip to Romania
Chat with a local specialist who can help organize your trip.
Get Started

You'll cross the border today between Serbia and Romania, and move a bit farther away from the river. Pedaling into the countryside of the rural Banat region, you'll go village-hopping for a taste of country life and well-preserved traditions. Romanians, Czechs, Hungarians, Germans, and Serbians live side by side in this multi-ethnic area off the beaten track.

Later in the day, you'll return to the banks of the Danube and cycle on to your guesthouse in the Romanian village of Bazias, right on the river next to the Serbian border. Feel free to swim in the river while you watch the sunset over the water. You'll clock a total of 28 miles (45 km) on your bike today.

This morning you'll explore more of the southern Banat region and its lovely pastoral scenery. Then you'll continue cycling along the river, watching as it changes from fast-flowing to calm and wide as you get closer to the Iron Gates dam located downriver. The Romanian and Serbian governments built the dam in the 1970s for hydro-electric power production. Later in the afternoon, you'll ride along the reservoir created by the dam. Spend the night in Berzasca.

Shake things up today with a ride into nearby towns and markets. You'll also visit a factory to learn about the industrial heritage of the Communist era. By the end of the day, you'll make your way to the narrowest point of the Danube by the Romanian-Serbian border, for a total distance of 31 miles (50 km). Here you'll enjoy spectacular views of the steep cliffs of the Danube Gorges. Stay the night at a guesthouse in Dubova.

The narrowest parts of the Danube Gorges are accessible only by boat or by foot. Today you'll do both! First, you'll cruise down the river and into a cave. After thoroughly exploring the cave, you'll go on a short hour-and-a-half hike to a viewpoint above the gorges for a magnificent view of the area.

In the afternoon, you'll get back on your bike for one last 18.5-mile (30 km) ride, and explore the Iron Gates Gorge. This 83-mile-long stretch of river (and near-vertical cliffs) forms part of the border between Serbia and Romania, and is also where you'll find the eponymous Iron Gates dam. Other sites in this area include a Roman monument, a massive face carved Mount Rushmore-style into the cliffside, and an adorable little chapel right on the river. You'll spend your last night in the port city of Orsova.

Travel by train or bus today to Bucharest, Romania's capital city. It's an eclectic, energetic city full of trendy cafes, beautiful centuries-old churches, and modern reminders of the country's recent Communist past. You'll arrive mid-afternoon and have some time to wander around until your departing flight. You also have the option to add on extra nights and spend more time in Bucharest.

Cycling Along the Danube - 8 Days

Hop on your bike and ride along the beautiful Danube River from Serbia...

Wind your way by bike through the Carpathian Mountains and...

Bayard T.
New Hampshire, United States
"Our 15 day, self-drive tour of Romania was exceptional! Raluca and her team put together a terrific itinerary which brought us to a wide range of scenic, hi..." read more
Traveled to Romania as a couple in October, 2018

Sandy A.
Pennsylvania, United States
"Cristi was amazing...very knowledgeable and helpful and just good company. I loved the time I spent over at the Black Sea...hotel wasn't the best. My room w..." read more
Traveled to Romania solo in September, 2018
Create your custom-made trip to Romania
Get Started