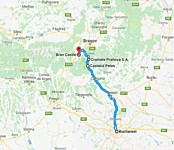 Lovers of folklore and fairy tales shouldn't miss this day trip to Bran Castle in Transylvania, known for its links to the legend of Dracula. You'll enjoy a guided tour of the mysterious castle, as well as stops at the dramatic Peleș Castle and a champagne tasting at a nearby cellar on this cultural excursion.

This enchanting day trip from Bucharest will bring you straight to the heart of Transylvanian history, beginning with a visit to Peleș Castle in the picturesque town of Sinaia. This striking neo-Renaissance castle in the Carpathian Mountains is a former home of the Romanian royal family built in the late 1800s. Your private guide will show you around its well-preserved rooms and apartments, including a royal library, music room, and more.

Continue north to the nearby Azuga Wine Cellar, a boutique sparkling wine producer with ties to the royal family. Toast to an excellent day in the Romanian countryside as you sample champagne produced using traditional methods.

Then make your way to Bran Castle, where you'll have lunch in its tea house before starting your private tour. Perched atop a 200-foot-high boulder, the site has over 1,000 years of history. As you wander through the timbered rooms linked by narrow winding staircases, you'll see furniture, armor, and weapons dating from the 14th to the 19th centuries.

And of course, you'll learn about the castle's ties to the legend of Count Dracula, who many people believe was inspired by the real-life Vlad the Impaler, a medieval ruler of the neighboring region of Wallachia with a reputation for cruelty. The author of 'Dracula,' Bram Stoker, also drew inspiration for his mythical character from local Transylvanian folklore and superstitions about the existence of immortal evil spirits called steregoi, who led normal lives during the day, but preyed on the innocent at night.

Bayard T.
New Hampshire, United States
"Our 15 day, self-drive tour of Romania was exceptional! Raluca and her team put together a terrific itinerary which brought us to a wide range of scenic, hi..." read more
Traveled to Romania as a couple in October, 2018

Sandy A.
Pennsylvania, United States
"Cristi was amazing...very knowledgeable and helpful and just good company. I loved the time I spent over at the Black Sea...hotel wasn't the best. My room w..." read more
Traveled to Romania solo in September, 2018
Create your custom-made trip to Romania
Get Started