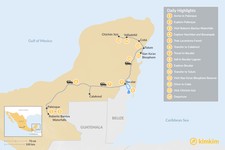 Take in the views from atop ancient Mayan pyramids and underneath waterfalls with this two-week trip through some of the region's top spots. You'll wander through complex Mayan ruins, along turquoise shores, and into jungles as you learn about Mexican history and ecosystems.

Welcome to Mexico! Your route to Palenque will take you through Cancún's international airport, followed by a local flight to Villahermosa and drive to Palenque in southern Mexico.

After breakfast, you'll drive out to the archaeological site of Palenque, one of the most intriguing archaeological cities in Mexico. The site gives you a window into the Mayan world's myths, rituals, and beliefs, and of course, the majestic architecture.

The city and its surrounding national park were added to the UNESCO World Heritage list in 1987 as one of the most important Mayan sites in the Usumacinta river basin. It covers an area of roughly 10 miles (16 km), with more than 200 architectural structures and constructions. Particular highlights include the Temple of the Inscriptions, the Grand Palace, Temple XI, the temples of La Foliada, del Sol and Conde, and the Ball game.

After visiting the buildings themselves, venture out into the surrounding vegetation and trek along the eco-archaeological path of Motiepá, home to a slew of flora and fauna, including jaguars and howler monkeys.

End the exploration at the Alberto Ruz Lhullier site museum, where original pieces found from different periods of Palenque are housed.

Follow the river to the Roberto Barrios waterfalls, about 9 miles (14 km) from Palenque. These natural formations along the Bascan's River are known for their clear turquoise water and surrounding landscapes. Stroll around, take photos, or jump in the river before you return to Palenque for the afternoon.

Get an early start this morning as you head out to the Chól community in Frontera Corozal. From there, you'll board a motorboat to take you out into the jungle, to the archaeological site of Yaxchilan, "the place of green stones."  You'll visit the great and small Acropoli and 33 temples before you return to Frontera Corozal. Then continue to your second site of the day at Bonampak in the Lacandon jungle. See original paintings with 1,100 years of antiquity along with steles and lintels that narrate the lifestyle and government of this pre-Hispanic city.

Meet your guide after breakfast for a roughly 3.5-hour trek through the forest to enjoy the nature and archaeological area at Lacanja. You'll learn about the animal and plant life in the area, especially the medicinal plants, and even pass a waterfall where you can take a swim break.

Plan your trip to Mexico
Chat with a local specialist who can help organize your trip.
Get Started

Transfer in the morning to the region of Calakmul, a combination of tropical reserve and Mayan historical sites.

Get out into the ancient Mayan city of Calakmul, one of the main capitals of the Mayan world and most significant archaeological findings of the 20th century.

The route there leads you through the jungle biosphere reserve, where you may spot monkeys, toucans, oscillated turkeys, deer, and, if you're lucky, jaguars and pumas. You'll also stop at the Natural History and Archaeology Museum, where you'll take a guided tour to introduce you to the regional nature and archaeology. Your guide will accompany you as you move on to the paths of the archaeological site itself, telling you about the meanings and uses of the buildings along with the city's history.

After you leave the site, you'll continue to the shores of Bacalar, the Seven Colors lagoon, where you'll spend the night.

Venture out to the pier and board a sailboat for a trip through the lagoon. Sail across the clear waters that change color as you pass through them on a 4-hour tour, including stops to swim and snorkel.

How you spend today in the relaxed village of Bacalar is up to you. There is plenty of history to learn about the conflicts between the Mayans and Spanish that happened here, as well as English, French, and Dutch pirates. Pay a visit to the Fort Museum for a look at the nautical history, or visit the house of culture to learn about poetry, theater, and traditional dance.

Keep lounging on the lagoon shore until lunchtime, at which point you'll transfer toward Tulum city. This popular destination sits in the highest zone of the eastern coast, giving it stunning sunrise views.

After you arrive, you'll have the afternoon free to swim in the cenotes or stroll around the city archaeological site.

Start early for an excursion in Sian Ka'an Biosphere Reserve. You'll follow a local guide to the archaeological site at Muyil, walking along an interpretive path through the jungle, up to the edge of the turquoise Chunyaxche lagoon.

Board a boat through the mangroves to get to a swimming spot and float down the slow river back toward the community center.

Start your day with a trip out to Cobá, surrounded by trees alongside a lagoon. The design and purpose of this area were different from the other Mayan cities', with white roads leading from each settlement up to the main pyramid of Nohoch Mul—the largest in the Yucatan Peninsula. You have the option to climb to the top of the pyramid to take in the views.

Continue to the ruins of ancient Tulum, a UNESCO World Heritage site and one of Mexico's most famous attractions. The city played an important role in maritime trade and functioned as both an astronomical observatory and a defense system. It sits within a mangrove ecosystem overlooking the Caribbean, making it extra enticing.

Visit a different archaeological site today at the Mayan ruins of Chichén Itzá. This pre-Hispanic city was once the most venerated center of worship and pilgrimage of the Yucatán Peninsula. Its main draw is the step Pyramid of Kukulkán (El Castillo), though there are many significant Mayan and Toltec buildings, sculptures, and reliefs that will pull you in. Look for the Chacmools, Temple of the Warriors, Hall of the Thousand Columns, and the ball courts, to name a few.

After you've finished exploring the extensive complex, head to the nearby Yokdzonot cenote. These unique natural sinkholes were once the only source of fresh water in the jungle, and were sacred to the ancient Maya, and believed to represent the entrance to the underworld. You'll spend the night in the nearby town of Valladolid.

Enjoy one last Mexican breakfast before you transfer to the airport to your flight home.

Experience three distinct areas of Mexico on this exciting two-week...

Take in the views from atop ancient Mayan pyramids and underneath...

Explore the best of Central Mexico's indigenous cultures and rainforest...

From ancient archaeological sites to relaxing waterfall oases, this...

This eight-day adventure is the perfect blend of history and culture in...
Best of Palenque

The Caribbean side of Mexico isn't known as the western Riviera for...

Take in the views from atop ancient Mayan pyramids and underneath...

Get ready for a 12-day road-trip adventure across Mexico's famed Yucatán...

Spend 13 days enjoying the best of the Yucatán Peninsula on this...

Two weeks is the perfect amount of time to see some of Mexico's best...
Best of Bacalar

Get away from the hustle and bustle on this adventurous weeklong trip to...

Spend six days exploring the best of Mexico's Yucatan Peninsula as you...

If you want to get away to Mexico's Yucatan Peninsula, but don't want to...

In less than a week, you can experience some of the best of Mexico's...

This eight-day journey combines Mexico City's famous landmarks with a...
Best of Tulum

Explore the history and culture of Mexico with this 13-day tour,...

Tim Z.
Maryland, United States
"Overall, our Mexico trip was amazing and I was very happy with our accommodations and planned activities. All of our guides were great, but a special shout-o..." read more
Traveled to Mexico as a couple in November, 2021
M
Matthew W.
United Kingdom
"This was my second trip organised via KimKim. Again, I cannot fault the service. Always very responsive and helpful. Thank you so much for your help." read more
Traveled to Mexico solo in November, 2020
Create your custom-made trip to Mexico
Get Started