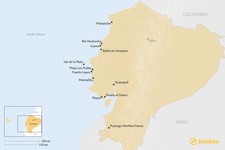 Mainland Ecuador is famous for its volcanic peaks, highland markets, and jungle wildlife, but the Pacific coast has its own range of attractions that make it worthy of a visit. Explore the regenerated waterfront of the nation's biggest city, surf and sunbathe at a beach resort, or visit the largest petrified forest in South America: whatever you choose to do, Ecuador's vibrant coastline won't disappoint.

Ecuador’s biggest city and commercial center may not have the abundant colonial architecture that Quito boasts, but this former pirate haunt is finally stepping out of the capital’s shadow. Pronounced "Gwhy-akeel," it is an increasingly popular stopover en route to the Galapagos and as a gateway to the beach resorts.

The waterfront Malecón has been regenerated, resplendent with historical monuments, artisan markets, botanical gardens, a ferris wheel and museums. Climb through the artistic district of Las Peňas to the lighthouse at the top for sweeping views over the city and estuary. Another highlight is the Iguana Park, beneath the neo-gothic cathedral, where reptiles roam free, and across the river is Parque Histórico, set in mangroves, where you can watch caiman, monkeys, and parakeets.

Playas may be rather unadventurously named (“beaches) but it’s the closest beach resort to Guayaquil. Like most resorts in Ecuador, it gets very busy at weekends in high season between Christmas and Easter but is quieter the rest of the year. The long beach and rows of beach cafes offer delicious seafood and the surfing is quite good. A few miles east (half an hour by bus) is Puerto El Morro, well-known for boat trips through the mangroves. You can spot dolphins in the channel as well as frigatebirds and blue-footed boobies on the islets.

There could be a sign over the entrance to Montañita proclaiming "You are now leaving Ecuador" because this hippy haven is often filled with more foreigners than locals. It's heaven for surfers and the rideable breaks reach 6-10 feet on good days. For party-goers, there are plenty of places for drinking and dancing, especially on high season weekends. Like other backpacker hubs, you'll either love it or hate it. It’s better to stay on the edge of town if you want to get any sleep after riding the waves and partying 'til dawn. There are quieter resorts nearby such as Olon to the north.

This is one of the only protected areas of Ecuador’s coast and has stunning scenery. The hub town of Puerto Lopez is a little beaten down but has a great setting in a wide bay surrounded by green hills of candelabra cacti. The town is the best base to explore the pristine, crescent-shaped Playa Los Frailes, arguably the most beautiful beach in the country, and often deserted.

Another popular excursion is Isla de la Plata 25 miles off the coast, rather unfairly nicknamed the "poor man's Galapagos" for its blue-footed boobies and other birdlife as well as a small colony of sea lions. From June to September, the region hosts scores of humpback whales with great opportunities to watch them twirling out of the ocean.

Eco-city Bahia de Caraquez is probably Ecuador’s most beautifully positioned city, spectacularly located on a sandy peninsula jutting from the mouth of the River Chone into the Pacific. For centuries this was Ecuador's biggest port, but nowadays it’s more famous for its environmental practices.

There is a comprehensive recycling program, and many residents and taxis use bicycles instead of cars. You'll find plenty of things to do: explore the tiny beach (though you’re better off going north to Canoa to sunbathe) or visit the museum Museo Banco Central , which has an excellent local archaeological collection from the eighth century to the fifth century BC. Climb up the hill to Mirador La Cruz for spectacular views, and for birdwatching, take an excursion through the mangroves to Isla Corazon and its large frigatebird colony.

Canoa offers a more relaxed alternative to the crowded party towns of Montañita, Atacames, and Salinas. Canoa's surf is consistently good – 10 miles of beach break with no rocks, no riptide, and no reef, it’s popular with both beginners and more experienced surfers and good for kite-surfing too. Most people come here to surf, sunbathe, eat seafood and party, but outside of town, there is an interesting ecotourism excursion. Ten miles north of town is Rio Muchacho, an organic farm, which produces fruit, vegetables, jams, coffee, and chocolate. You can visit the farm, ride horses, catch freshwater shrimp and make your own organic meal.

Further north, Ecuador’s coast becomes increasingly green and lush. The small fishing village of Mompiche has become a small backpacker hub. The main draw is the great surfing with one of the biggest left point breaks in South America. Mompiche has a fantastic setting with thickly forested hills and a beach backed with palm trees. Away from the beach, you can go horse riding or hike in the forests of Mache Chindul Reserve inland. If you're looking to splurge, stay at the Decameron Hotel high above the town.

The coastline south of Guayaquil is far less visited and many travelers simply pass through en route to Peru. However, it’s worth seeking out Puyango, the largest petrified forest in South America, just five miles from the Peruvian border. The forest covers some 6,000 acres and is quite remote, but accessible by bus from Machala, self-styled banana capital of the world. The petrification was probably caused by a volcanic eruption followed by a flood. On the trails, you can see fossilized plants, fish, and ammonites dating from the Cretaceous period embedded in the tree trunks. In the surrounding tropical dry forest watch out for over 130 species of birds, including parakeets.

Make the Most of Your Time in Ecuador

How Many Days Should You Spend In Ecuador

Ecuador is a country that packs enormous diversity into a small area so...

Have just five days in Ecuador? No problem: it's one of the smallest...

Local people are fond of saying that Ecuador is four countries in one:...

Two weeks in Ecuador gives plenty of time to enjoy all three of the...
Make the Most of Your Time in Ecuador

Best of the Ecuadorian Highlands - 7 Days

Traverse the very best of the Ecuadorian highlands on this 7-day...

This 10-day tour will take you up into the highlands of the Ecuadorian...
Ecuador Tours & Itineraries

On the northwestern side of South America, straddling the equator,...

Best Things to Do in Ecuador

Stretching from the Amazon to the Andes and straddling the southern and...

Even as tourism boom in Ecuador, there are still plenty of enticing...

By South American standards, Ecuador is a fairly small country. Most...

It might be cool and wet when you arrive in Quito this month, but in...

Carnaval season brings its share of partiers in to places across Ecuador...

It's the end of high season on the coast, but low season in the...

Ecuador in May: Travel Tips, Weather, and More

It's all change in Ecuador this month, as the coast becomes grayer and...
Ecuador Travel Advice

Kimkim has selected the best Ecuador travel agents so you'll have a...

Local people are fond of saying that Ecuador is four countries in one:...

Two weeks in Ecuador gives plenty of time to enjoy all three of the...

How Many Days Should You Spend In Ecuador

Ecuador is a country that packs enormous diversity into a small area so...

If you've only got five days in Ecuador, pick from one of the country's...

The landscapes of Ecuador's mainland are as varied as the people who...

Kim M.
Virginia, United States
"Ecuador was an amazing trip in the midst of a pandemic and an uncertain time within the world. It was a much needed vacation, and not one time did we feel un..." read more
Traveled to Ecuador as a couple in December, 2020

Jeremy P.
Mexico
"Matias was amazing. Quick responses, answered all the questions we had, most before we thought to ask them. The partners he worked with were on time, frien..." read more
Traveled to Ecuador as a couple in January, 2021

Mylinda D.
Arkansas, United States
"Daniel was amazing!! He was always available if we needed him! It was very reassuring. We had a phenomenal time in the Galápagos AND Daniel was able to plan ..." read more
Traveled to Ecuador as a family in February, 2021