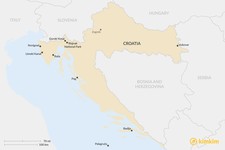 It’s easy to follow the crowds in Croatia, but that doesn’t mean you should. Although the Dalmatian Islands, Dubrovnik, and Split rightfully receive many accolades, it can pay off to forge your own path—especially in crowded peak season. Try Istria's best seafood in a sleepy fishing village, find hidden culinary delights on an island known for nightlife, and encounter the country's past through historic architecture and monuments.

This charming fishing village in northern Istria feels like it’s been stuck in time. Its tranquil, picturesque harbor is lined with tiny boats still in use by fishermen, rather than mega-yachts depositing partygoers looking to have a rowdy time, and you can wander its sleepy streets, lined with some of the best seafood restaurants in Istria, without feeling like you’re playing a game of dodgeball with a million other tourists who have the same idea. Check out the Museo Lapidario or museum of stone, which shows off ancient Roman artifacts found in the region, or the Patricijska palača Rigo, a tiny pink palace in the old town.

For inspiration on exploring Istria, check out this sample itinerary.

Venture Far from the Partying Crowds on Pag

Although this island near Zadar has a reputation for its nightlife, it’s not the clubs you'll want to go to when you’re looking for an off-the-beaten-path holiday. Leave the partyers behind and venture inland to discover two of Pag’s homegrown delicacies: a hard cheese known as Paški Sir, famed for its unique flavor, produced by a rare breed of sheep fed with the island’s wild herbs, and the intricate, delicate lace known as Paška Čipka, honored with a UNESCO award for intangible heritage. The island is also famed for its dusky red landscape, as well as its rich birdlife in the marshland at its southern end known as Veliko Blato. You’ll see all of it with little company, since most visitors will be too busy partying at the popular Zrće beach.

For more on the culinary specialties of Croatia, check out our guide here.

Check out an Ancient Monastery in Badija

If Korcula starts feeling a bit overrun for your taste, hitch a water taxi or ferry to nearby Badija, with similarly stunning beaches opening onto azure blue waters, but without the hordes of other swimmers and sunbathers fighting for space. It takes only 10 minutes to cross the small channel separating the two, but it will seem worlds away from one of Croatia’s most popular islands.

Right on the waterfront, is the 14th- and 15th-century Franciscan Monastery Badija, with its stone façade, red roof, and belltower, plus a well-preserved church and cloister. Once you’ve had your fill of history, it’ll be easy to find your beach spot for the day. Look out for the tame deer that range all over, and will even eat out of your hand if you’re lucky.

A departure from Croatia’s generally sunny disposition, the eastern city of Vukovar is nevertheless an important and necessary stop for anyone interested in the country’s recent history. One of the worst hit locations in the Croatian War of Independence of the 1990s, Vukovar has been reborn as a memorial to the horrors of war, with plenty of museums and monuments.

Make sure to pay your respects at two important museums, one in the basement of the hospital used during the siege, and another in Eltz Castle, and look up to spot the numerous water towers that have been left pockmarked with bullet holes. Finally, in a moving tribute to those who died, a white strone cross has been placed at the confluence of the Danube and Vuka Rivers.

Explore Forests and Valleys by Bike in Gorski Kotar

If you've already checked Plitvice Lakes National Park off your to-do list, consider the mountainous region of Gorski Kotar, located in the crook of Croatia’s arm, where the Istrian peninsula connects to the rest of the country. The best way to explore is on two wheels, following the Gorski Kotar cycling transversal to take in forests and valleys, plus wide, sweeping vistas dotted with tiny farms and villages. Make sure to pay a visit to Risjnak National Park, which centers on the Risjnak massif and shelters alpine vegetation as well as lynx and brown bears. Canyons and rock faces are a perfect opportunity for hiking and rock-climbing, but foodies are also drawn to the tasty local game, wild mushrooms, and foraged forest berries served in many low-key village restaurants.

For more on cycling in Croatia, check out this sample itinerary.

Explore the Waters of the Limski Kanal

Most travelers to Croatia don’t expect to see fjords this far north (though Montenegro is famous for them), but the Limski Kanal, while not quite a fjord by geological standards, offers just enough drama to make up for it. Technically a deep estuary running several kilometers, the Limski is beloved by Croatians for its fresh oysters, which are often sold from the shore along with fish and mussels. Before you hitch a ride on a tourist boat from Rovinj to ply the crystalline waters of the “Lim,” brush up on your movie trivia: this was the filming location for the 1964 Viking Drama “The Long Ships,” where it was a stand-in, of course, for a Norwegian fjord.

Built out of an old mining town during the Italian fascist era, Raša is a treat for architecture lovers. It was singled out by Mussolini as a model workers’ town after resident laborers went on strike against unjust work conditions, and was built by Trieste architect Gustavo Pulitzer-Finale along a central axis to include residences, businesses, and a church in the shape of an upside-down coal wagon, its bell tower reminiscent of a miner’s lamp, home to an exhibition about mining. Although this dusty village has somewhat of a ghost town feel to it, a far cry from the lush forests and azure blue waters you picture when you think of Croatia, it will appeal to those who are fanatical about hidden history.

If you tend to be attracted to places purely for their remoteness, then this tiny archipelago in the middle of the Adriatic, halfway between Croatia and Italy may be your ideal destination. On the largest island, Vela Palagruža, an old stone lighthouse has been converted to accommodate visitors. Other than that you’re truly roughing it: with no accommodations beyond camping, and no supermarkets or roads, you’ll basically be bringing your own food and water and either clambering over jagged cliffs, exploring the hidden coves of Stara Vlaka and Zola, or swimming and sunbathing at one of several beaches that promise that remote, castaway, desert island feel.

How Many Days Should You Spend in Croatia?

Dubrovnik and Plitvice Lakes National Park, two of Croatia's most...

The easiest and quickest way to travel to Dubrovnik is to fly: Dubrovnik...
Getting Around Croatia

Alexandre A.
Japan
"Fabulous 5 days trip in Croatia, Dubrovnik - Split - Hvar - Ston and Peljesac peninsula, planned at perfection by Robi! We were amazed by the scenery, the ..." read more
Traveled to Croatia as a family in May, 2022
M
Minh H.
Canada
"Croatia trip was amazing. Almost all of the accommodations were upgraded during our trip. All breakfast was paid for. The car was arranged and didn't have an..." read more
Traveled to Croatia as a couple in April, 2022