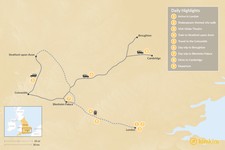 On this unique multi-city “Shakespeare in Love” tour, you will explore the towns and cities that shaped William Shakespeare's career, including London, Stratford-upon-Avon, and the romantic Cotswolds. Tour the English countryside and cities he called home and gain insight into the Bard's 16th-century world. You will tour the Globe Theatre, explore Shakespeare's hometown, as well as visit movie locations for the film based on the young playwright.

This unique Shakespeare in Love tour begins in the city of London, which, as Shakespeare’s home during his most successful years, undoubtedly shaped the playwright’s career. Meet your private transfer at the airport and drive to your hotel in central London.

Today, you will have the chance to fully immerse yourself in Shakespearean London as you walk in the playwright’s footsteps. Take in the glorious sights of Bankside on the River Thames, including the modern reconstruction of the iconic Globe Theatre of which Shakespeare was affiliated and showcased his best plays.

Today, your journey into Shakespearean London continues with a guided tour of the reconstructed Globe Theatre. During the small-group tour, your expert guide will tell you colorful stories about Shakespeare’s time in London and how the city helped influence his most famous plays. Cap off the day with an unforgettable performance at the Globe.

This morning you will board a high-speed train to travel into the English Midlands and to Shakespeare’s birthplace, Stratford-upon-Avon. After checking into your quaint hotel, your private guide will meet you for your guided walk of this medieval market town. You will discover Shakespeare's family homes, as well as charming Tudor houses, and lush green parks.

Day 5: Drive to the Cotswolds

After discovering iconic sights in London and Stratford-upon-Avon, now you will meet your driver and transfer to your hotel in the Cotswold District. Immerse yourself in the beauty of the English countryside, famed in the UK for its natural scenes, friendly villages, and grand stately homes.

Just outside the Cotswolds in the small village of Broughton lies the medieval fortified manor house, Broughton Castle. Set in a pristine parkland and dating back to the 14th century, Broughton Castle served as the backdrop for many scenes in the 1998 award-winning film, Shakespeare in Love. Wander the castle grounds for a glimpse into the lives of the English aristocracy from a time long forgot.

Rise bright and early this morning for a day trip to Blenheim Palace in Oxfordshire. A magnificent historic house built in the early 18th century, you will join your guide for a private tour around the palace. Discover the significance of the grand rooms and the palace’s intriguing history. You will also enjoy a tour of the vast grounds, which boast manicured gardens and precious fountains.

This morning you will head a few hours east to enchanting Cambridge. Surrounded by rolling fields of green, family-run farms and traditional villages, Cambridge is best known for its award-winning university, where many famous individuals have studied, including Charles Darwin and Stephen Hawking. Join a private walking tour of the university buildings, like King’s College and stroll along the River Cam taking in the historic sights.

After lunch, visit Anglesey Abbey,  an impressive country house surrounded by verdant gardens that include a working mill. Here, you can explore the 98 acres of landscaped grounds and discover the history of the 18th-century estate through the house’s reconstructed rooms.

If there's time before your flight, shop for last minute gifts and souvenirs in Market Square before meeting your driver to return to London and the airport.

On this British adventure, you'll experience two distinct and wildly...

There's nothing like attending a live soccer match in one of the UK's...

Explore northeast England's diverse history and culture as you travel...

On this unique multi-city “Shakespeare in Love” tour, you will explore...
England 9-Day Tours & Itineraries