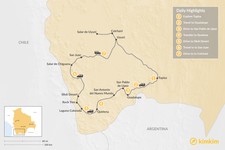 At the exit of the canyon, you'll discover a beautiful valley of giant cacti where you can find historic ruins of old houses occupied by the old Chichas of the pre-Inca indigenous culture. We'll then head back to Tupiza in the afternoon.

From Tupiza, we ascend the beautiful canyon until Palala Sillar, where the diversity of landscapes (canyons, craters) make it a lunar spot with colors both warm and intense, pastel and pale.

We'll then continue our way up to desolated mining areas of Nazarenito, Chilcobija, Trapiche and San Pablo de Lipez (capital of the South Lipez ), before arriving in the late afternoon in Guadalupe where we spend the night.

In the morning, we leave the village of Guadalupe for a short hike around the Guadalupe formations (also known as "Ciudad de Roma"). The peak is bristling with numerous rocky penitents that remind us of the Algerian Tassili.

From the top, we discover an extraordinary landscape of eroded monumental rock formations whose tones vary from white to red passing through all shades of ocher and gray. Accompanied by your guide specialist of the area, you will see incredible rock formations appearing to take various shapes: cathedrals, crocodiles, condors, and llamas. The landscape is surrounded by several snow-capped volcanoes, including the wide range of Cerro Lípez (5930 m). We'll explore the site before going back to Guadalupe and continuing by road to San Pablo de Lipez.

Plan your trip to Bolivia
Chat with a local specialist who can help organize your trip.
Get Started

Today, we'll visit the ancient village of San Antonio del Nuevo Mundo. According to legend, the village was suddenly abandoned due to a massive and unexplained invasion of viscachas (a typical rodent of the area). Then, we'll pass by the strange geological formation of the “Torreón” and cross over a 4500m pass before descending to Laguna Morejón. A detour will take us to the remote Laguna Celeste. Then, we'll get back on the road and head towards the village of Quetena.

Today, we continue enjoying the landscapes of the Sur Lipez area. We will start the day with the Laguna Colorada (4278 m), located 50 km. to the west from Quetena. This immense lake of pinkish water owes its name to the presence of light sensitive phytoplankton in its water, which also attracts thousands of flamingos during certain times of the year.

Then, we'll head north for 70 km. to the Siloli Desert (4700 m) where we will spend the night. Before arriving, we'll pass by the famous Stone Tree. Keep your eyes open: it is not unusual to spot some viscachas (Andean rabbits) in this area.

Today, we'll drive north along the Chilean border on the scenic “route of the Jewels”, due to all the lagoons along the way: Lagunas Honda, Ch’arkota, Hedionda, and Cañapa, a sanctuary to three varieties of flamingoes. Stop at the mirador of the volcano Ollague.

Still active today, this volcano contains one of the world’s highest open pit copper mines. The track descends from 4200 m to 3600 m. We'll cross the small Salar de Chiguana at the base of the volcano Tomasamil (5900 m) before reaching San Juan at the end of the day.

A two-hour trip from San Juan will take us to the Salar de Uyuni (3650 m). The atmosphere is amazing: the horizon appears endless and the feeling is overwhelming. We'll then head north to the island of Incahuasi. This island of volcanic origin is covered with stromatolites (fossilized bacteria representing the first traces of life on earth) and giant cacti.

On the way, we'll visit the “Cave of the Galaxy” and its stalactites resembling lace. In the afternoon, head east towards Uyuni. On the way, we'll stop by the Salt Hotels (closed since November 2001) and the salt exploitation of Colchani.

If you're interested in traveling to Bolivia's charming cities and most...

Perfect for travelers who want to experience the best of the Bolivian...

Immerse yourself in the stark beauty of the Atacama Desert and the...
Bolivia 7-Day Tours & Itineraries

From the world's highest capital in the Andean highlands to the lush...
Bolivia Tours & Itineraries

Make the Most of Your Time in Bolivia

These 5-day itineraries offer a range of options for a compact trip to...

If you have a week to spend in Bolivia, one great option is a highlights...

With 10 days in Bolivia, travelers have several options. On a highlights...

Consider yourself lucky if you have two weeks to spend in Bolivia: it's...
Make the Most of Your Time in Bolivia

The rain comes down heavily in January across most of Bolivia, despite...

The end of the wettest weather brings travelers in greater numbers than...

Kimkim has selected the best Bolivia travel agents so you'll have a...

From the Amazon jungle to soaring Andean peaks, Bolivia spans a vast...

Discover the Highlights of Bolivia - 15 Days

Take your time exploring the best Bolivia has to offer on this epic...

Kenneth G.
"While our trip to Bolivia was short, the choice of hotel accommodation was excellent. The food was amazing. Milenka was always available to help. We wou..." read more
Traveled to Bolivia as a family in June, 2022
A
Amanda B.
Montana, United States
"I did the 3 day tour of Uyuni. Milenka was a great travel agent and arranged everything so there was nothing I needed to do but enjoy my trip. Lucio was a gr..." read more
Traveled to Bolivia solo in May, 2022

Ari F.
New Jersey, United States
"Milenka was great and we had an awesome trip. We are 3 adults in our 30s and we really loved our time in the Pampas we stayed in Mashapique Eco Lodge and ha..." read more
Traveled to Bolivia as a group in August, 2019
Create your custom-made trip to Bolivia
Get Started