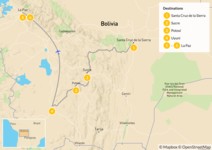 If you're interested in traveling to Bolivia's charming cities and most striking natural attractions, this weeklong itinerary around the country's highlights is perfect for you. See Colonial architecture and learn about indigenous history in Santa Cruz de la Sierra, Sucre, and Potosí before enjoying an excursion to the famous Uyuni Salt Flats and hiking to the Tunupa Volcano. You'll have a full day to spend in colorful La Paz at the end of your trip.

Welcome to Bolivia! You’ll arrive in Santa Cruz de la Sierra, a city of 1.5 million inhabitants. Considered Bolivia's commercial center, it's located at a staggering 1,312 feet (400 meters) above sea level. You can relax at the hotel and go for a dip in the pool before embarking on a guided city tour in the afternoon. You'll learn about how the city was founded by the Spanish in the 16th century and visit Plaza 24 de Septiembre, the central square, home to the stately Metropolitan Cathedral.

This morning, a driver will pick you up at your accommodation and take you to Sucre, the constitutional capital of Bolivia. This is the place where early resistance movements began, seeking to overthrow the Spanish colonial government. On your guided tour of the city, you will learn about the city's role in Bolivian history and in the history of Latin America. You will visit La Casa de la Libertad, where Bolivia's proclamation of independence from Spain was signed. You will also visit the Museum of Indigenous Art (ASUR), featuring textiles from the southern Andes, art by indigenous groups from the region, and original pieces by local artists.

After breakfast this morning, a guide will pick you up from your hotel and take you on a three-hour journey to the colonial city of Potosí, a UNESCO World Heritage site. Once you arrive, you'll go on a walking tour of the city, strolling down streets lined with colonial architecture, stopping at the artisan market and the Cathedral Basilica of Potosí, and visiting the famous National House of the Mint (Casa Nacional de la Moneda). Considered one of South America’s finest museums, it takes up a whole city block. Since its construction in the mid-18th century, the building has also served as a prison and the headquarters of the Bolivian army.

Plan your trip to Bolivia
Chat with a local specialist who can help organize your trip.
Get Started

Today you'll transfer from Potosí to Uyuni. Enjoy a scenic journey four-hour ride across the highlands to reach the gateway to the great Uyuni Salt Flats. First, you will visit the small salt museum (which was constructed with salt!) Then you'll continue to tour the salar, or salt flat, and walk around the otherworldly Incahuasi Island. Covered in enormous cacti, it boasts amazing views of the flats. Continue onward to the salt-harvesting village of Colchani to see how the locals produce salt. Then you'll visit the famed "train cemetery" that's filled with rusting train cars once used to transport minerals and people to and from Uyuni.

Today, head to the community of Coquesa to begin your hike up and along the base of the Tunupa Volcano. During the excursion, you'll see colorful fields of quinoa, herds of llamas and alpacas, and spectacular views of the volcano. At the end of your hike, you will visit a chamber containing ancient mummies. Afterward, a driver will take you to the airport in Uyuni to board an evening flight to La Paz. Check into your hotel in La Paz and get some rest before exploring the city on day six.

Spend the day exploring La Paz. You'll have time to explore the popular Witches' Market, where you can purchase medicinal herbs, and visit the San Francisco Cathedral, one of the oldest cathedrals in the city. You’ll see the main square, Plaza Murillo, continuing onward to the southern neighborhoods and a fascinating geological anomaly called Moon Valley (Valle de la Luna) because of its bizarre, moon-like surface. End the day with a cable car ride, taking in panoramic views of La Paz.

It's time to say goodbye to Bolivia! Head to the airport to catch your flight. Safe travels!

Looking for more inspiration for your trip to Bolivia? Check out these other 7-day Bolivia itineraries, with outdoor adventures, cultural trips, and best-of tours to hit the highlights.

If you're interested in traveling to Bolivia's charming cities and most...

Perfect for travelers who want to experience the best of the Bolivian...

From a cable car ride high above La Paz to a bike ride on the infamous...

Perfect for travelers who want to experience the best of the Bolivian...
Best of La Paz

From the world's highest capital in the Andean highlands to the lush...
Bolivia Tours & Itineraries

Make the Most of Your Time in Bolivia

These 5-day itineraries offer a range of options for a compact trip to...

If you have a week to spend in Bolivia, one great option is a highlights...

With 10 days in Bolivia, travelers have several options. On a highlights...

Consider yourself lucky if you have two weeks to spend in Bolivia: it's...
Make the Most of Your Time in Bolivia

The rain comes down heavily in January across most of Bolivia, despite...

The end of the wettest weather brings travelers in greater numbers than...

Kimkim has selected the best Bolivia travel agents so you'll have a...

From the Amazon jungle to soaring Andean peaks, Bolivia spans a vast...

Discover the Highlights of Bolivia - 15 Days

Take your time exploring the best Bolivia has to offer on this epic...

Kenneth G.
"While our trip to Bolivia was short, the choice of hotel accommodation was excellent. The food was amazing. Milenka was always available to help. We wou..." read more
Traveled to Bolivia as a family in June, 2022
A
Amanda B.
Montana, United States
"I did the 3 day tour of Uyuni. Milenka was a great travel agent and arranged everything so there was nothing I needed to do but enjoy my trip. Lucio was a gr..." read more
Traveled to Bolivia solo in May, 2022

Ari F.
New Jersey, United States
"Milenka was great and we had an awesome trip. We are 3 adults in our 30s and we really loved our time in the Pampas we stayed in Mashapique Eco Lodge and ha..." read more
Traveled to Bolivia as a group in August, 2019
Create your custom-made trip to Bolivia
Get Started