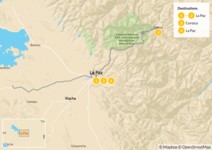 Perfect for travelers who prefer a more metropolitan experience, this five-day trip will focus on the most exciting sites in and around Bolivia's capital city. Start your trip with a day of archaeological exploration in the UNESCO site of Tiwanaku before heading to La Paz for posh Andean cuisine, a cable-car tour, an adventurous day of cycling in the mountains, and immersive experiences in some of La Paz's most unique neighborhoods.

After breakfast in Puno, Peru, you will be transferred by car to the Peruvian border where you will go through migration procedures. After crossing into Bolivia, you'll change vehicles where a guide will take you to your destination in Tiwanaku, a UNESCO World Heritage site. At the site, a guide will take you to the ruined city's main temples, some of which are still under excavation, including the Pyramid of Akapana, Kalasasaya and Puma Punku, and the inspiring Gateways to the Sun and Moon.

In addition to the traditional examples of Tiwanaku's architecture, giant monoliths and figurative representations are scattered throughout the archeological complex. Huge stone blocks weighing as much as 45 tons each are placed with such precision that not a single gap exists between them. Intricate sculptures of both the ancient people and their gods can also be seen on-site. After lunch, a representative will drive you to your hotel in La Paz.

After breakfast, you will explore the city via the city's new cable car system. Since its opening in 2017, the Mi Teleférico transit system boasts a network of 10 lines that criss-cross the city. Your full-day tour will take you on six different lines—from the adjacent city of El Alto to La Paz's bohemian neighborhood of Sopocachi with modern buildings, bustling squares, and public parks. The tour will end with a stroll along colonial Jaen Street with its five, small museums, and plenty of history.

In the afternoon, you'll be returned to your hotel where you'll have the rest of the evening free.

Today, you'll take a once-in-a-lifetime bike ride on the "World’s Most Dangerous Road" through one of the most amazing landscapes on earth, the Yungas, also known as the Cloud Forests of Bolivia. For the ride, we offer full-suspension bikes and the best safety equipment in the market: full-face helmets, elbow and knee pads, full-finger gloves, and Smith goggles. Our bilingual guides and staff will be happy to ride with you and share some historical facts about the road and the surroundings.

Your ride will take you downhill on an 11,482-foot (3500-meter) drop, and it will take about three hours total. During the ride, you'll experience incredible views of waterfalls, lush vegetation, rivers, valleys, and the Andes mountains, and you'll end your ride in the village of Yolosa. A driver will pick you up in Yolosa and transfer you to your accommodation in the mountainous town of Coroico.

Today, a driver will transfer you to Tocana, an Afro-Bolivian community where most of the residents are coca leaf farmers. The infamous coca leaf is one of the Yungas region's most important crops, and while it is known internationally as an ingredient of cocaine, the leaf has many other uses and is an integral part of Bolivian culture. You'll tour a farm where you'll chat with farmers and their families, and you will learn about local culture, music, foods, and nature.

In the mid-afternoon, your driver will return you to your hotel in La Paz, and you'll have the evening free.

It's time to say goodbye to Bolivia! After you have breakfast and spend a final morning enjoying La Paz, a driver will pick you up at your hotel. You'll be taken to the airport to catch your flight.

Perfect for travelers who prefer a more metropolitan experience, this...

This itinerary is perfect for those looking for a short trip through...

Perfect for travelers who want to experience the culture and hospitality...

This short itinerary is perfect for travelers who are interested in...

From the world's highest capital in the Andean highlands to the lush...

Explore the Farms and Markets of Bolivia's Andes - 12 Days

Welcome to the Central Andes! On this 12-day adventure, you'll get to...
Bolivia Tours & Itineraries

From the world's highest capital in the Andean highlands to the lush...

Embark on an unforgettable journey through the landscapes of southern...

Perfect for travelers looking to explore Bolivia's best cities and...

Nature-loving travelers won't want to miss this weeklong excursion into...

This unique journey takes you through some of the most spectacular...

Ari F.
New Jersey, United States
"Milenka was great and we had an awesome trip. We are 3 adults in our 30s and we really loved our time in the Pampas we stayed in Mashapique Eco Lodge and ha..." read more
Traveled to Bolivia as a group in August, 2019

Flaminia R.
New York, United States
"We thoroughly enjoyed our trip to the Bolivian Altiplano. Milenka was very good at planning the trip for our group of six . She was available for help and ti..." read more
Traveled to Bolivia as a group in June, 2019

Alfredo H.
Maryland, United States
"It was a great trip and experience Lucia Berrios did a great job and I was extremely happy with her services. She even provided me with a phone number that I..." read more
Traveled to Bolivia solo in January, 2019

Yifan L.
United Kingdom
"It was an amazing trip and exceeded my expectation! Despite I was there during the dry season so it was a pity that I did not see the beautiful reflection, I..." read more
Traveled to Bolivia as a group in December, 2018
Create your custom-made trip to Bolivia
Get Started