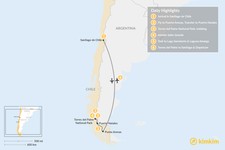 You don't need two full weeks to experience Chilean Patagonia. In fact, you can enjoy the major highlights in one national park: Torres del Paine. Not only is this one of the most famous trekking destinations in the world, but it's overflowing with snow-capped peaks, thundering waterfalls, and turquoise lakes. This quick six-day itinerary includes the best sites and treks in the park, and you'll kick off the adventure by exploring  Chile's capital of Santiago.

After breakfast, a driver will meet you at your hotel and transfer you to the airport, at which time you'll catch a flight to the city of Punta Arenas in Chilean Patagonia. Upon arrival in Punta Arenas, you'll hop a bus for a three-hour trip north to Puerto Natales. When you arrive, you'll transfer to your hotel and have the rest of the evening to relax and explore the town.

This small port city is the main base for excursions into Torres del Paine National Park. It's far less touristic than many other Patagonian hubs and thus retains its air of small-town tranquility. Puerto Natales offers simple pleasures like strolling its waterfront promenade, which sits on the Ultima Esperanza Sound. Facing north from here, you'll see the peaks of Cerro Benitez and Cerro Toro, and the view at sunset is phenomenal.

Day 3: Torres del Paine: Trekking to the Base of the Towers

After breakfast, your excursion into the park will begin. Today you'll be heading up to the base of Torres del Paine on one of the most popular hiking routes in the park. Although it can be completed in less than a day, this hike is strenuous and requires a good level of physical fitness. However, the stunning views at the base of the Paine massif make it well worth the effort.

The trekking route covers 18 km (11 miles) and lasts about nine hours. Every step of the way you will enjoy views of beautiful scenery comprised of rivers, native forest, mountain peaks, and narrow valleys. You'll likely even spot some impressive local avian varieties, like condors and black eagles.

Your route will begin at the Las Torres Hostel and will take you over the Ascencio River, at which point you'll ascend about 2.5 km to a lookout featuring panoramic views of the valley below and the surrounding mountains. Then you'll continue through sections of lenga forest until the remaining 45-minute stretch, which is a steep ascent that involves a hard scramble over a moraine to the final path leading up to the viewpoint.

This is the hardest portion of the hike, However, once you arrive at the lagoon at the base of the Paine Massif and stare up at the nearby Cuernos del Paine (Horns of Paine) jutting into the sky, you'll likely forget all about your exhaustion. Upon arrival, you’ll have ample time to rest by the lagoon and marvel at the amazing rock formations as you enjoy a delicious picnic lunch.

Afterward, you'll begin the return trip back down the trail. The descent takes approximately four hours, at the end of which you'll arrive back to the hotel.

Today you will visit the park's most spectacular waterfall: Salto Grande. This day's excursion is a relatively easy one, as the outing begins with a 45-minute drive to Pudeto, located in the heart of the park's lake district. From there it’s a short walk to Salto Grande, a raging aquamarine cascade that channels water between lakes Nordenskjöld and Pehoé.

From the waterfall, you'll continue on a trail that leads to Sendero Mirador Cuernos, one of the park’s most spectacular viewpoints. The panorama here features prime views of the Horns of Paine, the French Valley, and the French Glacier rising straight up from the north shore of Lago Nordenskjöld. The total hike time is about two hours roundtrip, and high winds are common during this trek.

In the morning you'll venture out on a full-day excursion to the east side of the park. First, you'll arrive at a viewpoint looking out over Lago Sarmiento, the second-largest lake in Torres del Paine. It's the perfect spot to snap epic photos of the mountain landscapes as well as the guanacos that live in the area.

You'll then arrive at Laguna Amarga, notable for the alkaline waters that result in its surface being so glassy and attractive. Also here is a stunning view of the Paine Massif. You'll stop nearby at Laguna Blanquillos, another lagoon, this one a natural habitat for endemic birds like ducks, black-necked swans, and geese. The hike continues to a rocky outcropping where you can see 20 cave paintings that date back about 6,000 years. You'll follow the path up to the Sarmiento Lake gatehouse where you'll enjoy a box lunch and a peaceful respite from the day's exertions.

Afterward you'll begin the hike back to your lodging in Torres del Paine.

Today, you’ll take a private transfer from Torres del Paine National Park to the Punta Arenas airport. You'll then hop on a domestic flight to Santiago. From there you'll meet your connecting flight home. ¡Buen viaje!

This itinerary covers a lot of ground in less than a week yet sticks to...

On this active 6-day itinerary, you will discover one of the...

This six-day itinerary coves Buenos Aires and Ushuaia, which has the...

You'll be amazed at just how many adrenaline-inducing activities you can...
Patagonia 6-Day Tours & Itineraries