Discover the history and culture of Macedonia's ancient kingdom with a private tour of the Pella and Vergina archaeological sites. Enjoy the scenic countryside of northern Greece as you make your way to Vergina.

Upon arrival, a guide will lead you through one of the most impressive archaeological sites in the world. As the first capital of the ancient Macedonian kingdom, it was originally called "Aegae." Today, you can visit its underground complex of tombs and golden treasures of Alexander the Great and his father, Philip of Macedonia. You'll learn about ancient burying customs, traditions, values, and moral ethics. Enjoy viewing artifacts such as gold jewelry, weapons, and religious symbols.

Then, head north to Pella, the birthplace of Alexander the Great.

Pella was the ancient capital of the Macedonian kingdom starting in the late 5th century BCE. Archeologists have found interesting artifacts and monuments that enlightened historians about the civilization's everyday life. You'll start in the museum and explore mosaics, silver artifacts, weapons, statues, and maps dating back to the 4th century BCE. Then, you'll roam the nearly 10,000 acres (4,000 hectares) of ruins at this archaeological site. 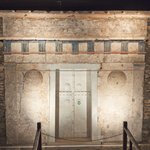 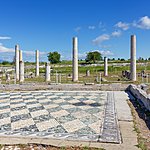 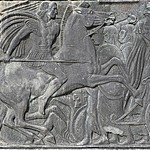 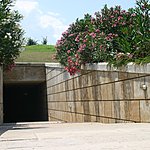 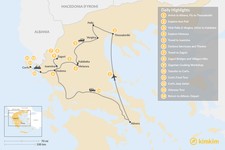 Experience the lesser-known side of the country with this two-week trip across Northern Greece. You'll go from Greece's second city of Thessaloniki to living like the proverbial pasha in lakeside Ioannina, then up to the clifftop monasteries of Meteora. Continue on through the stone Zagori mountain villages to wrap up your journey on the shores of Corfu in the Ionian Sea, where you'll follow in legendary traveler Odysseus's footsteps. 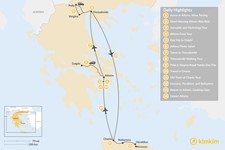 Spend two weeks exploring the Greek cities of Athens and Thessaloniki and the island of Crete with this comprehensive itinerary. Start and end in the capital, where you'll tour its neighborhoods on foot and on two wheels, discover its most photogenic spots, indulge in Athenian cuisine, and learn about ancient mythology straight from the source. In Thessaloniki, you'll discover a rich history spanning several eras and visit archaeological sites on a walking tour. Then head to Crete, where you'll roam the quaint Venetian lanes of Chania's Old Town and tour the ruins of the Palace of Knossos. 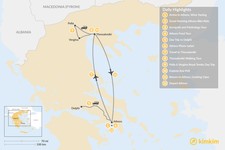 The thrills of buzzing Athens and Thessaloniki await on this 12-day adventure based in Greece's two largest cities. Begin and end in the capital, where you'll frequent the markets and coffee houses in between trips to the Acropolis and the sacred site of Delphi. Travel north to Greece's second city for some fascinating Byzantine and Ottoman history and architecture, and a stroll around beautiful the beautiful Ano Poli neighborhood. Back in Athens, spend your last day learning to prepare a traditional meal at a cooking class with a view.

Tour of Philippi & Kavala from Thessaloniki

Explore the archeological site of Philippi and the historic old town of...

Beach Day on the Chalkidiki Peninsula near Thessaloniki

Chalkidiki is the picturesque region and peninsula that sits southeast...

Explore the Jewish monuments of Thessaloniki and learn about the once...

Enjoy a moderate hike beneath Mount Olympus via the scenic Enipeas...

Mythology Tour in the Foothills of Mt. Olympus

Discover Greek mythologies and stories of Alexander the Great on a...

Seven to 11 days is a great length for a Greece trip with stops in...

Make the most of your five days in Greece with this quick hit tour of...
Best of Thessaloniki