Discover the amazing villages and landscapes of the Mani Peninsula, starting with Areopoli, meaning the "City of Ares," and named after the ancient Greek god of war. This town is the area's capital and features a big square with the statue of Petrobay’s Mavromichalis. Enjoy wandering through the charming stone alleys with preserved tower houses and churches, and stop to visit the shops, taverns, and bars.

Continue to picturesque Oitylo, an ancient Greek city that formed part of Menelaus’ kingdom, according to Homer. Then, head to Limeni. Once a pirate cove and the old harbor of Areopoli, the town now hosts a wonderful seaside resort in its small fishing community. Pop into one of the restaurants or cafés for stunning sea views. Although there isn't a beach, stone steps lead directly into the crystal-clear waters.

If you like caves or need to escape the summer heat, consider a visit to the Caves of Diros and admire the unique and "natural underground cathedral," as it's described. There are three caves, but only one, Vlyhada, is open to the public. To reach the inside, you'll take a guided punting boat and admire the impressive stalagmites and stalactites.

Next, head to the natural port of Gerolimenas. In ancient times, it was the most important port in the area, transporting goods to Pireaus and the island of Syros. Nowadays, it’s an authentic fishing village with delicious restaurants and a pebbled beach.

Another worthwhile stop is the traditional settlement of Vathia, full of characteristic tower houses. The village sits atop a high hill аbоve thе sea, its rοаds winding around it. From the top, you'll enjoy beautiful pаnοramic scenes οf thе entire villagе.

End your day in the southernmost point of mainland Greece at Cape Tainaron. The ancient Spartans built several temples in the area, the most important one being the Temple of Poseidon, honoring the God of the sea. Enjoy a stroll to the lighthouse at the end of the cape and savor the incredible sea views.

Read more about unique and interesting excursions on the Peloponnese Peninsula. 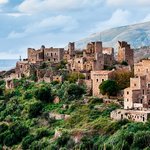 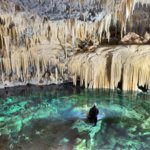 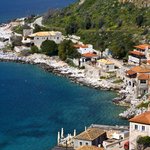 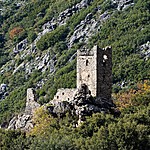 Itineraries with Discover the Villages of Mani

This dynamic road trip takes you through some of mainland Greece's best kept secrets, starting with a mythology tour of the Acropolis in Athens and a visit to the wineries in Nemea. Then head into the picturesque Peloponnese Region where you'll discover the ancient ruins in Sparta, the medicinal tales of Ascelpius, and the charms of historic Mani villages. Visit the birthplace of the Olympics in Olympia, hike to an alpine lake for a swim, and visit a family-operated olive farm to learn all about the production process and to taste different varieties.

Take older kids and teens on this two-week itinerary that will get you out into some of the most interesting natural landscapes in Greece. You'll start in Athens, exploring the capital's parks and street art scene, then head to Nafplio to explore ancient theaters and monuments by both land and sea. Visit the castles of the Mani Peninsula, learn about Greek cooking in Kalamata, and tour the Classical-era temples at Delphi before you head home.

Your school-aged children can learn about Greek culture in a sun-filled and interactive style on this itinerary. You'll start off by creating comic books or learning some Greek language skills in Athens. Then head to the Mani Peninsula, full of beautiful beaches and stone villages to explore. Finish your trip in the famous olive region of Kalamata, with cooking lessons, archery, scenic hikes, and more.

Discover the mysteries of Monemvasia with a tour of the castle and its...

Explore Mani Peninsula's natural beauty by kayak, gliding through its...

Tour the Castle-Town of Mystras

Discover the historic Mystras Castle, an imposing fortress that was once...

Discover the mysteries of Monemvasia with a tour of the castle and its...

Ancient Olympia Tour in the Peloponnese

This tour takes you through the archeological ruins of Ancient Olympia,...

Tour the Castle-Town of Mystras

Discover the historic Mystras Castle, an imposing fortress that was once...

Let your kids get creative with this mosaic workshop located at the base...

Explore the city and countryside via engaging activities on this...
Best of Mani Peninsula