Explore 7 trips designed by local kimkim specialists to get ideas for your trip to Colombia.

Travelers can comfortably see all of Colombia's major cities and regions on an 11-day tour. You can even get off the beaten path to more remote areas of the country for a mixture of city exploring and nature. One option is an arrival in Bogotá with visits to the wildlife-filled Amazon region and the laidback Caribbean Coast. Travelers who want to cover the interior of the country can hike in the Coffee Region and Los Nevados. Or stick to the cities: the charming colonial city of Cartagena offers especially unique culture, art, and cuisine.

See more ideas below, or check out 11 Days in Colombia: 5 Unique Itineraries. 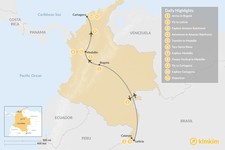 Colombia's heritage extends from the shores of the Caribbean to the rainforests of the Amazon. This unique 11-day itinerary hinges on an event which takes place in Medellín every August: the Batalla de Flores, or "Festival of the Flowers," is one of the biggest spectacles in the entire country. So set aside some time at the end of summer and prepare for an excursion that you won't soon forget. 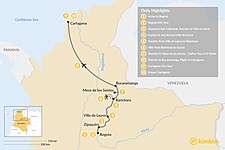 If you want to experience the heart and soul of colonial Colombia, you can't do better than this 11-day itinerary. Leaving no cobblestone unturned, you'll venture from the epicenter of Spanish colonialism in the Andes—the capital city of Bogotá—to the expansive central plaza of Villa de Leyva, a gem of the Andean highlands. Then it's off to Barichara, a throwback pueblo so charming that it was named a National Monument of Colombia. Last but not least you'll visit the granddaddy of them all, Cartagena de Indias to walk its ancient ramparts.

An enticing draw of visiting Colombia's northern coast is close proximity to culture, mountains, beaches, and islands for the ultimate tropical adventure. On this 10-day itinerary, you'll start off in Santa Marta with two days of hiking around Tayrona Park. Make an overnight stop in Minca to visit a coffee finca before continuing on to Cartagena where you'll explore the city's quaint narrow streets with historic palaces, churches, and mansions painted in pastel colors. Then speedboat to the Rosario Islands for swimming and snorkeling before finishing the trip with one more night in Cartagena's romantic Old Town. 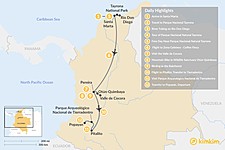 This all-encompassing itinerary combines Colombia's popular attractions with some roads less traveled. You'll begin your journey on the Caribbean coast. This leg will take you to Tayrona National Park, and the colonial fortress of Cartagena. Then fly to Medellín, and visit El Peñon de Guatape before heading to Colombia's mountainous Coffee Region. Here you'll hike, mountain bike, and birdwatch through sub-Andean forests. Next, it's off to the archeological site of Tierradentro, with its ancient underground burial chambers before ending your stay in the colonial town of Popayán. 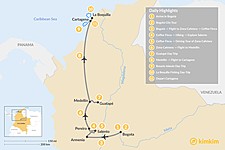 Travelers who like to be on the move can check off three cities on this whirlwind 11-day tour starting with Bogotá's Spanish colonial sites and buzzing nightlife. You'll then fly to the heart of Colombia's Zona Cafetera for an overnight at a coffee farm and hiking through the famous Cocora Valley. From here, head to Medellín—a city with a rising culinary and art scene, as well as constant spring-like weather. End the trip on the Caribbean coast where you'll take a day trip to the Rosario Islands and explore the narrow streets of Cartagena's inner-walled city.

This itinerary starts and ends in two of Colombia's most exciting cities, the capital of Bogotá and the "city of the eternal spring," Medellín. In between, you'll embark on a high-altitude trek into Los Nevados National Park. In Bogotá, you'll get to know the food scene of the city before heading to the Coffee Region. You'll visit a working coffee farm and set off on a four-day trek through the central Andes. After your trek, you'll relax in the thermal pools outside of Manizales, with the still-active Nevado del Ruiz volcano as a backdrop. Then it's off to Medellín, where you'll get to know this dynamic city as you ride its Metrocable network of gondolas.

On this multifaceted, 11-day tour, you’ll explore the Caribbean region of Colombia and its biodiverse landscapes. The trip begins in Cartagena, a vibrant port city with a rich history and plenty of sites to see. Then, you’re off to Santa Marta and Minca for four, full days of birding among the various ecosystems. The trip concludes in Tayrona Park, with its beautiful beaches and cultural excursions among the natives.