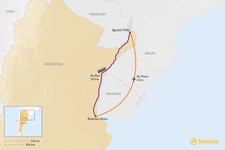 Over 800 miles (1290 kilometers) separate the Argentine capital of Buenos Aires and Iguazú Falls National Park, which sits on the border separating Argentina and Brazil. By far the easiest way to access the falls is to fly into the Puerto Iguazú airport and take a taxi or tour from there. Alternatively, several long-distance buses depart from Buenos Aires for Puerto Iguazú daily, though the journey takes over 18 hours and is not recommended.

Most of the flights for Puerto Iguazú depart from Aeroparque, which is also the easiest airport to reach from the city center. Located right on the edge of the Palermo neighborhood, the airport is easily accessible by taxi, and the drive there will give you nice views of the La Plata River.

LATAM and Aerolineas Argentinas also offer flights leaving from Ezeiza airport, 20 miles outside of Buenos Aires. The best way to reach Ezeiza is to book a private transfer in advance. Another option is to use the Tienda León shuttle buses, which depart from Puerto Madero every 30 minutes. A few local lowcost airlines also depart from El Palomar airport, which is harder to access from the capital and generally not your best option.

Once you arrive in Puerto Iguazú, you can book a taxi or private tour to take you directly to the falls, which are only 6 miles (10 km) away from the airport.

Several companies offer daily trips from the Retiro bus station in Buenos Aires to Puerto Iguazú. Buses range from reclining semi-cama (half-bed) seats to first-class, lie-flat seats. Though the buses are clean and comfortable, the journey is too long to be worthwhile.

Once you reach the Puerto Iguazú bus terminal you can book a taxi or board a local bus to reach the falls, which are 11 miles (17.5 kilometers) away from the station.

Most flights from Mendoza, Argentina's wine capital, to San Carlos de...
Getting Around Argentina

J
Jeff O.
Iowa, United States
"From our pickup at the airport, to our delivery to return, our trip was smooth and wonderful. Gabriel, our driver in Buenos Aires, was helpful far beyond our..." read more
Traveled to Argentina as a couple in January, 2023

Juan N.
Washington, United States
"While researching agencies to help me plan my 50th birthday trip to South America, I came across the name KimKim. KimKim is an online travel agency that use..." read more
Traveled to Argentina as a couple in December, 2022

Alana E.
California, United States
"Everything was so very easy and wonderful, tailored so nicely to our family! The kids had a marvelous time, no melt downs, which meant that the parents had a..." read more
Traveled to Argentina as a family in December, 2022

Shahrzad D.
California, United States
"Where to start? I hope I can properly express how incredible our trip to Argentina was because of the planing and care Natalia provided. This was my first e..." read more
Traveled to Argentina as a group in December, 2022

Bob H.
Massachusetts, United States
"Thank you Matias (and KimKim) for helping plan, arrange and support a wonderful trip!! We had memorable experiences in Buenos Aires, not only because the WC ..." read more
Traveled to Argentina as a family in December, 2022

Sarah B.
Colorado, United States
"Oleksandra did an amazing job of planning our trip. Everything she planned was perfect and just what we wanted and needed. The shows she arranged for us we..." read more
Traveled to Argentina as a family in December, 2022

Angelee D.
Nevada, United States
"I am a well-travelled individual and I have to say, the service Hervé at KimKim provided was second to none. He was able to listen to our intereste and build..." read more
Traveled to Argentina as a group in December, 2022

Joyce W.
New York, United States
"This was an excellent and amazing vacation! Hard to single out one place. I learned a lot about a part of the world that I never really thought about. It ..." read more
Traveled to Argentina as a family in December, 2022
Create your custom-made trip to Argentina
Get Started