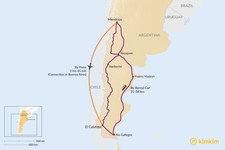 The most direct route to cover the 1,580 miles (2,542 km) that span Mendoza and the Patagonian city of El Calafate is, surprisingly enough, through Buenos Aires. A few airlines offer flights between the two western cities through the capital. The long, tedious bus rides that get you down south are decidedly not worth it, but you could choose to make the drive yourself—an ambitious road trip that takes more than thirty hours.

Both driving routes take more than two days but give you the opportunity to take in the sights along the way. This 16-day self-drive itinerary offers inspiration for pit stops in a rental car, but sticking with the quick plane ride would give you more time to see all that Patagonia has to offer.

Duration: 5 hours and 45 minutes, plus layover

Plane travel is by far the most efficient way to get from Mendoza to El Calafate, even though all routes require a connection in Buenos Aires. The trip between Aeropuerto Mendoza (MDZ) and El Calafate Airport (FTE) takes just under six hours, depending on the length of your layover in the capital. By careful to book flights with layovers in the same airport—the two airports in Buenos Aires, Aeroparque Jorge Newbury (AEP) and Ezeiza International Airport (EZE), are very far apart.

El Calafate is about 30 minutes from the airport, and private transfers, taxis, and rental cars are available to get you between the airport and your accommodations.

Duration: 31-34 hours, depending on route and stops

Though it's an ambitious trip, getting to El Calafate by rental car allows you to take in a huge swath of Argentina's Atlantic coast or western border depending on the route you take.

The faster route via RN40 takes about 31 hours and snakes through western Argentina. On this route, you can stop in Neuquen, a Patagonian city famous for its dinosaur fossils, or San Carlos de Bariloche, an area full of mountain lakes and trekking opportunities.

The second route via RN3 takes about 34 hours and follows Argentina's eastern coast, bringing you through several port cities. You may consider a driving break in Puerto Madryn, home to Patagonian wildlife like penguins and whales, or in Rio Gallegos, where you can see the Atlantic Ocean one last time before heading inland to El Calafate.

Few other places in the world can compete with the wild, jagged...

Madeleine C.
New York, United States
"Emi planned the honeymoon of our dreams! We had less travel time than we would have liked but she was able to help us plan a trip that included multiple dest..." read more
Traveled to Argentina as a couple in April, 2022
J
Jessy D.
Alabama, United States
"We had a blast. It was a seamless experience from Planning it with Emi to the panoramic views, gorgeous beautiful South America to the outstanding guides, go..." read more
Traveled to Argentina as a group in May, 2022
Plan your trip to Argentina
Customize your trip with help from a local travel specialist
Plan Your Trip