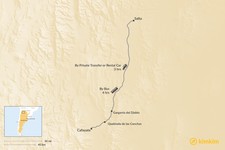 Salta is a great jumping-off point to explore Northwest Argentina and the city of Cafayate, in the Calchaquí Valley. Cafayate is 95 miles (153 km) south of Salta and is known for producing some of Argentina's best wine.

Driving is the best way to get there, a scenic, three-hour journey done either with a private transfer or in a rental car. Buses are also available, though with this option you'll miss out on the route's worthwhile points of interest (and the general comfort of having your own car).

The road between the two cities is beautiful, with lots to see along the way. If you're traveling by rental car, you'll head south from Salta on Route 68, which is clearly marked and takes you all the way to Cafayate. Door-to-door private transfers between Salta and Cafayate are also available, and very convenient.

As you get closer to Cafayate you'll start to see the impressive, deep-red rock formations and canyons of the Quebrada de las Conchas (Shell's Valley). Make sure to stop at the Garganta del Diablo 30 miles (50 km) from Cafayate, a narrow rock canyon and popular tourist stop, as well as the nearby rock formation Anfiteatro (Amphitheater).

Buses from Salta to Cafayate depart from Salta's central bus terminal. You can buy tickets online or directly at the bus terminal, and there are several buses per day. Once you arrive at the Cafayate bus terminal you can take a taxi or even walk to your destination.

If you choose this option you'll miss out on some of the route's most impressive sights, as buses don't make stops at the aforementioned points of interest.

To visit Tierra del Fuego National Park, your best bet is to fly to...
Getting Around Argentina

Discover why Salta is called 'La Linda' (the beautiful) on this 5-day...

Immerse yourself in Argentina's sights, tastes, and rhythms on this...