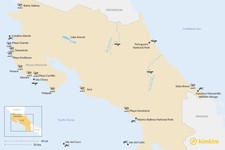 Costa Rica certainly lives up to its name (literally 'Rich Coast'), blessed as it is with miles of beaches on both its Pacific and Caribbean coasts. The country has long recognized the value of preserving its stunning environmental assets, making this relatively diminutive nation a leader in conservation. As one of the happy consequences, Costa Rica's rivers, lakes, and seas provide abundant opportunity for endless outdoor adventures.

Surfers migrate to the coasts of Costa Rica in all seasons, and for good reason: when the swell isn't ideal on one coast, surf's up on the other. Though the Caribbean coast is best left to experienced surfers, the Pacific is packed with breaks for all levels.

Beginners are spoiled for choice when it comes to beautiful locales suited to novice surfers. Surf schools and camps abound up and down the Pacific coast. On the Nicoya Peninsula in the Guanacaste region of northern Costa Rica, Tamarindo is the longest-running expat outpost. Its rivermouth break is good for beginners, and the well-developed town offers plenty of dining, drinking, and distraction for après-surf. More experienced surfers will find more challenging waves north and south of town in Playa Grande, Playa Avellanas, and beyond.

For those seeking a more low-key, bohemian sort of experience, head farther south on the Nicoya Peninsula to the towns of Nosara and Sámara, or complement your surf sessions with yoga and clean cuisine toward the southern tip of the peninsula in Malpaís.

On the central Pacific coast, the popular town of Jacó has both surf schools and more challenging breaks for experienced surfers, with a breadth of good sleeping, dining, and nightlife options. Farther south, the more rustic Playa Dominical embodies the more typical Costa Rican surf town, with its fishing-village feel, rowdy local bars, and cheap but healthy eats.

If running rapids is more your speed, Costa Rica's rivers deliver. Kayakers will also find their bliss on whitewater, ocean, or the stiller waters of mangrove forests.

Your best bet for an adrenaline fix awaits in the tropical gorge of the Río Pacuare in central Costa Rica. On the Pacuare, rapids are rated up to Class V, although most rafting trips run the lower section consisting of a series of exciting Class III and IV rapids. Multi-day trips can also be arranged on the Pacuare, allowing more time to enjoy the gorgeous rainforest setting, with opportunities for bird-watching and wildlife sightings.

Alternatively, the Río Sarapiquí in Costa Rica's steamy northern lowlands also boasts plenty of whitewater action, with most outfits running Class II to Class III rapids. This region of the country is a bit less traveled than other areas, giving it a remote feel. Floating on the Sarapiquí between rapids also allows for bird-watching and relaxed enjoyment of the river's lush surroundings.

Kayaking is also widely accessible in diverse environments all over the country – take a sea kayaking tour from the Nosara Peninsula's Playa Carrillo to the tiny Isla Chora and pretend you're stranded on a tropical island for the day. Or silently paddle through the canals of wildlife-rich Tortuguero National Park on the Caribbean coast, where a guide can point out herons resting in overhanging branches, caimans lurking just beneath the water's surface and monkeys scrambling among the trees. Or go kayaking at Marino Ballena National Park, where you may spot humpback whales or sea turtles in the ocean, then get an intimate look at mangrove forests in the inlets feeding into the Pacific.

Kiting aficionados will want to head to Costa Rica from November to May when consistent winds kick up.

World-class wind draws kiteboarders to Laguna de Arenal, where the dormant Volcán Arenal looms above the lake and the lovely mountain greenery surrounding it. Kiters can launch at the northern end of the lake, which at 33 square miles is capacious enough for the enthusiasts who play here.

Kiteboarders also find fantastic wind on the northern Pacific coast at Bahía Salinas, near the Nicaraguan border. This uncrowded bay, not particularly popular for average beachgoers, provides a beautiful setting and perfect conditions for kiting.

At both these kiteboarding meccas, resorts catering to wind worshippers also offer licensed instructors for the uninitiated.

Costa Rica's most spectacular dive site is undisputedly Isla del Coco, 342 miles offshore from the southwest coast. Avid divers can book multi-day trips on a liveaboard for the privilege of diving in this stunning, remote location, but for those planning to stay closer to the mainland, diving and snorkeling locales abound.

Among the most notable is another island, this one 10 miles offshore from the Osa Peninsula. The national park of Isla del Caño has a rugged shoreline dropping down into the deep water of the Pacific. Around the island, divers and snorkelers will encounter sea turtles, schools of pelagic fish, multiple species of shark, and manta rays. Both day trips and multi-day excursions are possible to Isla del Caño.

Another notable dive spot is at the Catalina Islands, a group of 20 small islands off the northern Pacific coast. Due to the strong currents here, divers must be at the intermediate or advanced level to dive with the schooling tropical fish, several species of rays, and sharks.

Snorkeling is accessible along both coasts at myriad locations, with colorful fish, anemones, and sea turtles making appearances. On the Caribbean coast, immerse yourself at Gandoca Manzanillo Wildlife Refuge and Cahuita National Park; on the Pacific side, explore Marino Ballena National Park near Uvita.

Finally, stand-up paddleboarding (SUP) continues to sweep across Costa Rica. SUP is widely accessible and super fun on both flatwater and in the surf. You'll find rentals and lessons from Lake Arenal to both coasts, although the sport is probably best established along the Pacific coast of the Nicoya Peninsula, with lessons and rentals offered from Tamarindo to Santa Teresa. Instructors will usually give an introduction to technique and safety on the beach before heading into the water.

Plan the perfect week in Costa Rica with these family-friendly itinerary...

This active weeklong journey around Costa Rica is perfect for families...

Snorkel with tropical fish, hike through the rainforest, and spot sloths...

Nicola G.
United Kingdom
"I am so grateful to Kim kim . They truly took the stress out of my trip to Costa Rica . I knew it was a difficult country to traverse but wanted to see as mu..." read more
Traveled to Costa Rica as a couple in April, 2022

Gail A.
Israel
"First of all, our many many thanks to Olman for organizing our trip and looking after us along the way when we had any inquiries!!! We enjoyed Costa Rica ..." read more
Traveled to Costa Rica as a couple in April, 2022
A
Audric T.
Canada
"I’m usually very sceptical about booking vacation packages, but i have to say that i was really impressed with Randall and his service! Whenever i go somew..." read more
Traveled to Costa Rica as a group in April, 2022