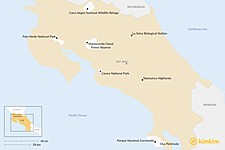 More than a quarter of Costa Rica is protected jungle, home to a wide variety of native wildlife—including 850 colorful species of birds. Learn about the country's best areas to spot them, from the Osa Peninsula to the Monteverde Cloud Forest.

For aquatic birds, make a beeline for the Cano Negro National Wildlife Refuge. Specifically, you'll want to head to Cano Negro Lake and Río Frío, both located within the refuge. The best way to go is a day trip from the town of La Fortuna, near the Arenal Volcano. Once you get there, you'll encounter storks, egrets, herons, and roseate spoonbills. Note that the best time to visit the refuge is during the rainy season (May through mid-November) when the area is at its most green, the water levels have risen, and the birds are out in full force.

You'll want to check out Arenal before or after your trip to Cano Negro—read up on the area in the Ultimate Guide to Arenal.

Carara National Park is the northernmost rainforest on Costa Rica's Pacific coast. It's one of the country's most popular ecotourism destinations, as it's located a mere two and a half hours from the capital of San José. Among the birds on hand, you can see fiery-billed aracari, keel-billed toucans, jacanas, and turkey vultures. Carara National Park boasts one of the largest scarlet macaw populations anywhere in the country.

It's best to get to the park early in the day to avoid tourist crowds. The park opens at 7 am in the dry season (November through April) and 8 am during the rainy season (May through mid-November). There are a number of marked hiking trails within the park—including the Bijagual Waterfall hike, featured here.

This protected area, owned by a consortium of universities and research institutions, sits on 3,700 acres of rainforest in Costa Rica's northeastern region. Each year, La Selva Biological Station is the temporary home of some 300 scientists and students who come to study rainforest ecology. Today, it's regarded as one of the most popular sites for tropical research. This field station's accessibility (it's located two hours away from San José) has allowed it to become a popular ecotourism destination in its own right.

It's a haven for birders, in particular, as the region boasts more species than any other part of the country—around 450, half of which are endemic to the area. Birders can find all kinds of great vantage points throughout the station area, thanks to the number of elevated walkways that allow you to get up close and personal with the environment. Keep an eye out for the bare-necked umbrellabird, great antshrike, and the Rufous Motmot, among others.

In 2007, Costa Ricans voted the Monteverde Cloud Forest, a reserve located in the northwest of the nation, as one of the country's "seven wonders." It's the feather in the cap, so to speak, of Costa Rica's eco-tourism industry. Once you spend some time here, it isn't hard to see why the area has earned such rave reviews.

In the cloud forest, mist cover hangs over the tree canopy. Monteverde means "green mountain"—in this green and otherworldly environment, you can spot any number of 400 birds species as you explore its trails and elevated walkways. One can't-miss bird is the show-stopping Resplendent Quetzal, famous for its fabulous plumage.

To maximize your time at here—along with three other national parks—consider this 14-day trip itinerary that includes an expert-guided nature walk through Monteverde.

The Osa Peninsula, located on Costa Rica's southeastern end, is home to the famed Corcovado National Park. Out of all the protected areas in the country, this might be the most visited. It appeals to everyone, from hikers to backpackers to luxury travelers, due to its jaw-dropping biodiversity. Here you'll find rainforests overflowing with all kinds of flora and fauna, from tapirs and jaguars to squirrel monkeys and scarlet macaws.

Some 350 species of birds exist on the peninsula, including 16 types of hummingbirds. Near the lagoons, marshes, and rivers, you can spot a number of waterbirds, such as the tiger heron, which often waits on riverbanks for frogs and fish to pass within range of its long beak. Even if you don't venture into the park itself, as long as you're on the peninsula, you're guaranteed to see interesting wildlife.

Interested in heading off the beaten path on the Oso Peninsula? Check out this suggested five-day itinerary for inspiration.

Since Palo Verde National Park is comprised mainly of wetlands fed by the Tempisque River, the best way to enjoy it is on a boat tour. These tours afford great vantage points for bird watching, as the area is less mountainous than other protected parts of the country. In other words, less jungle means better birding. You'll find a lot of aquatic birds here, such as the tiger heron, Jabiru, and White Ibis, along with other exotic species like toucans and macaws.

Where central Costa Rica gives way to the southern Pacific coast, you'll find the Talamanca Mountains. This massif sits at a higher elevation than many other mountain ranges in the country, with some peaks topping out at 11,500 feet. That said, most of the visitor accommodations and birding lodges are located in the forested foothills near the shore, whereas the higher elevations feature treeless páramo (alpine tundra) ecosystems. You can reach the area via Costa Rica's main Highway 2, on the way from Cartago to San Isidro.

Birders will be spoiled here, as it's not uncommon to spot over 250 varieties in a single full day trekking around the highlands. You'll likely be treated to the sight of a number of colorful tropical species, such as the Resplendent Quetzal and the red-capped manakin, a little egg-shaped bird with a bright red head. Fun fact: the males woo females by performing a moonwalk-like dance on a tree branch.

Keep reading about Costa Rica's native species in the Ultimate Guide to Wildlife in Costa Rica. And to start planning your trip, find out When to Go and How Many Days to Spend.

How Many Days to Spend in Costa Rica

While most visitors to Costa Rica will head west to the Pacific, the...
Costa Rica Travel Guides

How to Choose the Best Cloud Forest Experience in Monteverde

With four days to spend in Costa Rica, it's wise to focus on one region....

Spot vibrant wildlife and learn about Costa Rican culture on this...

Snorkel, hike, and bird-watch by day, then sleep in elegant eco-lodges...

L
Luciano C.
California, United States
"Nuria was great and made sure I had an amazing trip! I did not have any time to plan my trip so I relied on Nuria to take care of it for me. This is definite..." read more
Traveled to Costa Rica as a family in January, 2023

Dylan C.
Utah, United States
"Such an amazing adventure our plannned had for us. Amazing people , food , experiences. Definitely would recommend the same trip to all ages. " read more
Traveled to Costa Rica as a couple in January, 2023

Stephanie N.
Arizona, United States
"We had a blast in Costa Rica (Tortuguero, La Fortuna, Monteverde) and were impressed with how smoothly everything went! We had no issues during our stay. Acc..." read more
Traveled to Costa Rica as a couple in January, 2023
M
Marcin B.
California, United States
"1st time with KimKim Planning the trip with KimKim was a pleasure. We were a bit overwhelmed with what CR has to offer and having someone help us make the m..." read more
Traveled to Costa Rica as a family in November, 2022