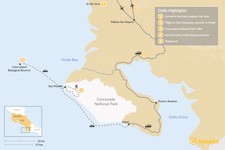 The Osa Peninsula is located in one of the most remote areas of Costa Rica and is home to windswept beaches, virgin rainforest, and exotic wildlife. Over five days you'll alternate between a pampered holiday lifestyle, rugged jungle treks, and scuba-diving/beach adventures. It's the best way to enjoy this gem of biodiversity tucked away in the great tropical paradise that is Costa Rica.

According to National Geographic, The Osa Peninsula is one of the most biodiverse regions on Earth. This is due to the fact that the main protected area here, Corcovado National Park, is comprised of virgin rainforest. Due to the extreme location of the peninsula, the area has resisted modernization and thus serves as a throwback to a time when much of Costa Rica was little touched by human encroachment. In fact, the Osa village of Bahía Drake has only in the last couple of decades gotten access to electricity.

This itinerary is designed for those who want an off-the-beaten-path adventure whilst still enjoying some of the creature comforts included in luxury vacations. It's also a great way to commune with nature, as this hidden gem of a region is home to beaches and rainforest trails with fewer crowds and higher concentrations of wildlife. The peninsula itself contains over half of all species in Costa Rica, making this tour one of the best options for those who want to observe diverse flora and fauna both on land and sea.

Welcome to Costa Rica! Upon arrival in the capital of San José, you'll check into your luxury hotel and settle in. If your flight arrives early enough, take the afternoon to head downtown and explore the city. San José features a wide array of leafy plazas and European-inspired architecture, which is exemplified in the stately post office building and the opulent Teatro Nacional (National Theater).

If you so choose, you can then tour the Pre-Columbian Gold Museum which houses an impressive collection of goldwork artifacts. Also, check out the National Museum, a former military barracks now painted bright golden hues and which recounts Costa Rica's fascinating history from indigenous times to present day. Regardless of your plans, around seemingly every corner in this rich city, there's bound to be something to capture your attention.

In the early morning, you'll catch a flight to the Palmar Sur Airport, located in southwestern Costa Rica. There, you will transfer by car and then motorboat to your luxury eco-lodge on the Osa Peninsula. This is one of the southernmost areas of Costa Rica, known for its jungles and hidden beaches. You'll have the remainder of the day free to explore and indulge in any of the region's available activities. These including scuba diving, a guided nocturnal nature tour, ocean and river kayaking, horseback riding, and more.

Additionally, the villages of Uvita and Dominical are just an hour to the north. Both feature palm-fringed beaches and some of Costa Rica's best wave breaks, making it an ideal spot if you're into surfing. Should you so choose, we can arrange a private transfer for you so you can kick back and enjoy your ride to the beach in style.

To arrive at Corcovado National Park, you'll embark on a 25-minute boat ride from your hotel down the western coast of the Osa Peninsula. After a wet landing a few feet from the beach, your rainforest adventure begins. You'll enter the primary rainforest, hiking along the clearly-marked and easily-navigable trails next to Corcovado's northernmost ranger station, San Pedrillo. Throughout the morning, your bilingual guide will identify many of the endemic species along the trail. Look out for white-faced, spider, and howler monkeys, as well as white-lipped peccaries, scarlet macaws, coatis, and countless other animals.

After a quick lunch break, you will continue the trek to a tropical waterfall. Along the way, you'll have even more opportunities to view the diverse flora and fauna of the region. Upon arrival at the waterfall, enjoy a break to snap photos and swim in the refreshing water. Later in the afternoon, you'll return to the ranger station and board the boat back to the hotel. If you're lucky, you might be able to see humpback whales or dolphins swimming in the sea.

Today, you'll have the pleasure of exploring the waters of the Caño Island Biological Reserve on a scuba diving excursion. This protected marine area is located just off the northern tip of the Osa Peninsula, by Bahia Drake (Drake Bay). The area is home to an abundance of marine life including reef sharks, sea turtles, parrot fish, eels, manta rays, puffer fish, snappers, sea cucumbers, octopus, and more. There's also a wide variety of coral-building organisms and 19 different species of coral, such as fan, head, and brain coral.

To arrive there, you'll board a 30-foot Island Hopper and an expert will offer a safety lesson geared for all ages and experience levels. Then it's time to plunge into the water. Visibility is 30-100 feet throughout the year, making Caño Island a perfect site for underwater photography.

Time to say goodbye to Costa Rica. You'll fly out early in the morning to San José and connect to your flight home—or onward to the next adventure. Adios!

This quick getaway will let you experience the many sides of Costa Rica...

This five-day beach getaway takes you to the heart of Guanacaste...

Whether you're drawn to wellness retreats in lush surroundings,...

This mountain town needs no introduction to those familiar with the...

Epitomizing laid-back travel, Costa Rica has hundreds of hotels but only...

Best of the Osa Peninsula

Best Eco-lodges in the Osa Peninsula

The Osa Peninsula is one of the most remote areas in Costa Rica. In...

This trip is perfect for those who want to explore Costa Rica's...

Costa Rica is a well-known adventure destination, and this 10-day...

Take in the best of Costa Rica's wildlife and nature on this two-week...

This whirlwind 5-day itinerary is perfect for first-time travelers who...

Costa Rica is open to all international travelers without requiring a...

There are a few great options for getting from the capital city of San...
Getting Around Costa Rica

E
Erika S.
Florida, United States
"It was the perfect itinerary! Mix of exciting and relaxing activities! It all even worked out with the weather. Amazing trip." read more
Traveled to Costa Rica as a group in July, 2021

Ameer S.
Florida, United States
"Costa Rica was beautiful and we did so many great activities ,and we couldn’t have done it without the help of Diego! Thanks again! " read more
Traveled to Costa Rica as a group in July, 2021

Diane B.
California, United States
"Everything he suggested was perfect and all went extremely smoothly! Our experience with Olman was great, he listened to our thoughts and desires and he mad..." read more
Traveled to Costa Rica as a family in June, 2021

Sheri L.
New Hampshire, United States
"We loved our trip that Olman planned for us to Costa Rica. Each place we visited was exactly what we had requested. The Hotels were all unique and very in..." read more
Traveled to Costa Rica as a family in July, 2021

Adele B.
California, United States
"Adriana organized an extraordinary tour of Costa Rica for my mother and me. Not only were our hopes for the trip surpassed, but the ease of travel was absolu..." read more
Traveled to Costa Rica as a family in June, 2021