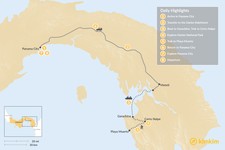 Ideal for hikers, birders, and lovers of wild nature, this off-the-beaten-path trek takes you to Darien National Park—an ecologically-diverse rainforest at the tip of Central America. In addition to rare species of flora and fauna, the region is full of history and native people who are happy to display their artistry and hospitality. Start and end the trip in cosmopolitan Panama City for a dose of urban culture.

Day 2: Transfer to the Darien Rainforest

After breakfast at your hotel in Panama City, you'll be picked up for your 3.5-hour transfer to the town of Meteti with some interesting stops along the way. From here, you'll check in to your accommodations and meet your specialized guides for the upcoming jungle excursion.

To better prepare for the next three days in the rainforest, your guides will go over the contents of your backpack to make sure it contains only the essentials. This is an important step where you will learn to prepare your backpack for the great outdoors like a real professional.

After breakfast, it's time to discover Darien's primary forest while also making a visit to an Embera community located in the southern part of the region.

The day starts with an early morning transfer to a pier where you'll embark on a motorboat ride across the Gulf of San Miguel (about two hours) to the village of Garachine. With a little luck, you might see dolphins living in the bay, in addition to many birds.

Next, you'll register with the authorities before starting the trek! Then you'll hike for about an hour through the forest to reach the Embera community of Cerro Naipe. During your visit, you'll learn about the area's food and agriculture, meet creative artisans, and enjoy friendly exchanges with the locals.

Once you've reached your overnight camp, you will learn basic jungle techniques like setting up hammocks and cooking dinner while surrounded by nature.

Plan your trip to Panama
Chat with a local specialist who can help organize your trip.
Get Started

This morning, you'll participate in cooking breakfast in the enchanting rainforest before starting a five-hour trek in Darien National Park with your specialized guides. The park—a natural bridge between North and South America—is one of the important UNESCO World Heritage Sites in Central America and the most extensive of all national parks of Panama, so you're in for some good scenery and wildlife.

In the afternoon, you'll reach your camping spot in the middle of the park and will again set up your hammock and cook dinner together. Relax and enjoy the park while spotting rare bird species like macaws, parrots, tapirs, and harpy eagles.

Today is your last day of the trek, and it involves crossing several small streams for nearly six hours where you'll get see plenty of flora and fauna along the way including rare and endangered species. When you get close to the village of Playa Muerto along the Pacific coast, inhabitants of this area's Embera community will join you at the end of the trek to encourage you along.

In the afternoon, you can take a short walk to the watchtower to explore nearby Pacific coast beaches and waterfalls. You'll also have time to participate in tattooing and other crafts before you watch (and join) a traditional Embera dance with the villagers—a memorable end to the Darien jungle experience!

It's your last morning in the rainforest! Depending on the time of your transfer, enjoy a morning hike and/or simply relax with breakfast at camp. At the designated time, you'll make the drive back to Panama City.

Arriving in the afternoon, you'll have the rest of the day to spend at leisure. Make sure to take advantage of anything you may have missed at the beginning of the trip. Or maybe you want to head to Metropolitan Park for a picnic lunch. This urban wildlife refuge (the only wildlife refuge in the city) offers easy-to-moderate trails and dedicated lookout points.

Today, after breakfast at your hotel, you'll explore the older side of Panama City with a private guide on a half-day tour. Start off by checking out the ruins and museum of Panama la Vieja—the first city founded by the Spanish colonists in 1519, and therefore the country's first Spanish settlement, which was later destroyed by pirate attacks in the 17th century. Following the destruction, the Spanish colonists decided to rebuild their city in the neighborhood now known as Casco Viejo (more on this next), located along the peninsula—in other words, a better place to defend against future attacks. In any case, Panama la Vieja is an interesting place to walk around with most of the action centered around Plaza Mayor.

Next, you will explore the city's well-known colonial area of Casco Viejo, a UNESCO World Heritage Site since 1980, and also the most popular tourist destination in the city. Recently restored, the area is a beautiful example of colonial architecture festooned with colorful street art, flower boxes, and some of the most charming boutique hotels, galleries, cafés, and markets in Panama City. You'll walk through the streets with your guide visiting different historic monuments including France Square (with a beautiful view of the modern city) and Bolivar Square while learning tidbits from Panama's past along the way.

Following the tour, you'll continue to Miraflores, where you can follow the technical operations of the Panama Canal from a platform. The Miraflores is one of three sets of locks in the canal, and a must-see while in Panama.

Harken back to the days when Panama was rich with colonial ports and...

The Wonders of Panamá - 7 Days

Ideal for hikers, birders, and lovers of wild nature, this...
Panama Tours & Itineraries