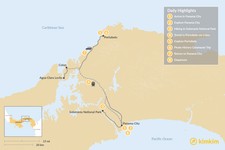 Harken back to the days when Panama was rich with colonial ports and pirate invasions on this 8-day itinerary. Starting in the capital, you’ll explore historic neighborhoods, see the Panama Canal by train, and visit ruins of a UNESCO-listed fort. Finish the trip with a catamaran ride in the same waters as the pirates once sailed. You’ll also hike in two national parks laden with exotic birds, monkeys, and tropical plants.

Today, after breakfast at your hotel, you'll explore the older side of Panama City with a private guide on a half-day tour. Start off by checking out the ruins and museum of Panama la Vieja—the first city founded by the Spanish colonists in 1519, and therefore the country's first Spanish settlement, which was later destroyed by pirate attacks in the 17th century. Following the destruction, the Spanish colonists decided to rebuild their city in the neighborhood now known as Casco Viejo (more on this next), located along the peninsula—in other words, a better place to defend against future attacks. In any case, Panama la Vieja is an interesting place to walk around with most of the action centered around Plaza Mayor.
Plan your trip to Panama
Chat with a local specialist who can help organize your trip.
Get Started
Next, you will explore the city's well-known colonial area of Casco Viejo, a UNESCO World Heritage Site since 1980, and also the most popular tourist destination in the city. Recently restored, the area is a beautiful example of colonial architecture festooned with colorful street art, flower boxes, and some of the most charming boutique hotels, galleries, cafés, and markets in Panama City. You'll walk through the streets with your guide visiting different historic monuments including France Square (with a beautiful view of the modern city) and Bolivar Square while learning tidbits from Panama's past along the way.
Following the tour, you'll have more free time to enjoy more of the neighborhoods on your own or simply relax at your hotel.

Today, you'll have an early breakfast, and then head out of the city for a five-hour trip where you'll experience a part of Panama that is surrounded by tropical woods and animals.

Soberania National Park is just 20 minutes from Panama City, yet hosts over 1,300 types of plants and 525 bird species. There are dozens of trails that allow visitors to submerge in the luxuriant nature of Panama, and you'll walk through one of them with your guide.

Following the hike, you'll take a boat ride around Gatun Lake and explore some of its islands. This is an area rich with monkeys, iguanas, and crocodiles, which you can observe in their natural environment. Listen for the cry of the howler monkey that mixes along with the chant of exotic birds for the ultimate reminder of your traveling status.

This morning, it's time to depart Panama City and head north towards the Caribbean coast. To get here, you'll transfer to the Corozal train station to board the Panama Canal Railway in the direction of the Colon Province—a ride which takes about an hour.

Once you've arrived, you'll visit the Agua Clara Visitors Center where you'll have time to dine at the café for lunch. You'll also be able to climb the observation tower rising 197 feet (60 m) above the ground for a breathtaking view of the Caribbean Sea and the third lane of the Panama Canal: Agua Clara Locks. While up there, look for the original Gatun Locks, once the main Atlantic port on the isthmus of Panama. If time allows, the center offers an onsite theater with two informational videos in English, as well as a gift shop, and an easy ecological trail with potential sloths, toucans, and howler monkeys.

Save some energy, because next is a visit to the ruins of the historic fortifications of San Lorenzo, located at the mouth of the Chagres River, west of the Panama Canal. This UNESCO World Heritage Site was originally established as part of a series of Spanish coastal defenses to protect transatlantic trade—an area that had to be rebuilt numerous times by the Spanish over the course of a few hundred years due to attacks. Most notably, English pirate Henry Morgan's siege in 1670, which caused the Spanish to build an even stronger fort high on the cliff overlooking the river—the remains which you'll explore today.

Today, you'll have the entire day to explore the Colon Province any way you wish! Due to its location along the sea, you'll have plenty of aquatic-themed options to choose from.

For starters, you could explore more of Portobelo National Park, made up of more than 85,000 acres of coastal forests for hiking. The park also protects marine communities, so you'll have access to coral reefs, mangrove swamps, coastal lagoons, and beautiful beaches. In fact, there are 44 miles of beachfront between the Bay of San Cristóbal to the north and the Bay of Good luck to the south. Also, within the park is one of the more beautiful natural harbors in the Caribbean: the bay of Portobelo.

If you're keen to get on a boat (you'll be on one tomorrow, by the way) you can sign up for day-trips to Isla Grande and Isla Mamay for a range of watersports like snorkeling, kayaking, or scuba diving. Another destination only reachable only by boat is beautiful Playa Blanca—a sheltered white sand beach surrounded by dense wild vegetation and colorful reefs.

Today you’ll embark on a fun and historic Caribbean experience by way of a catamaran. All you have to do is sit back and relax as you set sail from the bay of Portobelo.

Translated to 'beautiful port', this area became the main trading point for Spaniard ships between Europe and Central/South America, carrying treasures and gold from the Incas and Aztecs. Because of this, Portobelo became the target of attacks by Pirates like Sir Henry Morgan and Sir Francis Drake. You’ll get to recreate the adventures of these pirates on the same waters they traversed over 500 years, as you sail past fortresses and strategic places.

History aside, there’s plenty of time to enjoy the Caribbean scenery as you sail through the aquamarine sea with colorful marine creatures and coral reef formations, along with the sounds of the nearby rainforest. You’ll also have a choice to visit a secluded beach for sunbathing and swimming, to go snorkeling or kayaking, or just relax on board. Your crew will offer lunch, snacks, and refreshments, including beer, wine, water, and soft drinks throughout the excursion.

Return to Portobelo in the afternoon where you'll have the rest of the evening to spend on your own.

It's your last morning in Portobelo! Depending on the time of your transfer, enjoy a walk around the village and/or simply relax with breakfast at your hotel. At the designated time, you'll be picked up by a private driver for the trip back to Panama City.

Once you check into your hotel, you'll have the rest of the day to spend at leisure. Make sure to take advantage of anything you may have missed at the beginning of the trip. Or maybe you want to head to Metropolitan Park for a picnic lunch. This urban wildlife refuge (the only wildlife refuge in the city) offers easy-to-moderate trails and dedicated lookout points.

Harken back to the days when Panama was rich with colonial ports and...

The Wonders of Panamá - 7 Days

Ideal for hikers, birders, and lovers of wild nature, this...
Panama Tours & Itineraries

S
Sabena K.
Florida, United States
"Thank you Zulmy, the guides at Tucaya, and Nadia for planning and executing my vacation in Panama. They all did a wonderful job putting together an itinerary..." read more
Traveled to Panama solo in May, 2021