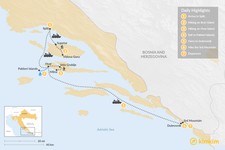 Explore three amazing Croatian jewels—Split, Hvar, and Dubrovnik—and discover why so many people fall in love with Croatia. In just a week you'll have time to learn about Croatia's long, rich history in the cities of Split and Dubrovnik; relax on beaches and go sailing around the Pakleni Islands, and hike to monasteries and forgotten villages on Hvar and Brač.

In a week, there's enough time to taste the highlights of Croatia's culture, history, and beautiful landscape. Start in pretty Split, then spend a couple of days hiking on the islands of Brac and Hvar, locating lost villages and visiting monasteries. Switch up the pace by taking a relaxing sailing trip around the Pakleni Islands Archipelago, stopping to swim and snorkel off the gorgeous beaches of the islands. End with a couple of days in historic Dubrovnik, a city that oozes historical charm.

Start your first day finding out all there is to know about Split, the 1700-year-old city and UNESCO World Heritage Site. Visit Diocletian's Palace, Peristyle, St. Doimus's Cathedral, and the Piazza. Or, head to the Marjan Park Forest, known as the "lungs of the city." No matter where you go, you'll find that the Marjan Peninsula is covered with historical sites and natural playgrounds, from historic churches to black pine trees and beautiful beaches.

In the morning, take a ferry from Split to Brac Island. Spend a spectacular day on Brac hiking through its beautiful scenery. There are numerous trails on the island, one of the best of which leads to Blaca Monastery. From the ferry port at Supetar, transfer to the starting point of the hike, and then walk about 45 minutes to Blaca Monastery.

After a guided visit of the monastery, which was built over centuries around a cave and into the rock, spend some time relaxing, taking pictures, and enjoying the scenery. This place is not only famous for its museum but also for its quiet atmosphere, positive energy, and unique setting. Hike onwards to Vidova Gora, the highest peak on Brac. Enjoy amazing views all the way to the mainland and the surrounding islands, which you will be visiting in the upcoming days. After the hike, stop for lunch at a traditional tavern in the central part of Brac island.

Day 3: The Lost Villages of Hvar

Leave Split in the morning to take the ferry to Hvar island, then transfer to the starting point of the day's hike. You'll visit two villages: Velo Grablje is the first on your route. It was founded 500 years ago, and though only a few people now inhabit the village throughout the year, hundreds gather for the annual lavender festival to harvest and celebrate the village's saints. Next, hike down the canyon to get to Malo Grablje, and have a simple but delicious lunch at perhaps the most authentic of the island's taverns.

This morning, depart on a group sailing adventure to the Pakleni Islands. These islands' name is popularly translated as Hell's Islands (pakleni means 'hellish'), but it actually derives from paklina, an archaic word that means 'tar'. This refers to the pine resin harvested on these islands, which was once used to coat ships. Excellent sailing can be had here, and your local skipper will expertly guide you round the most picturesque islands. Explore numerous delightful coves, before choosing one for a swim and another for snorkeling.

Day 5: From Hvar to Dubrovnik

After breakfast, take a fast ferry from Hvar to Dubrovnik, which takes about 4 hours. Dubrovnik is an incredibly picturesque old city, full of red-roofed and stone houses, as well as church and palace spires. It’s no wonder the makers of A Game of Thrones chose to film some scenes in Dubrovnik.

The Republic of Ragusa (the historical name of Dubrovnik) was a free state for four and a half centuries, although the city’s history dates to long before that. According to new archeological findings, Dubrovnik was founded by Greek sailors. Throughout history, Dubrovnik has been Venice’s maritime and cultural counterpart in the Adriatic. The Republic’s independence ended with the arrival of Napoleon’s troops, and the layers of the city's history can be found everywhere. Dubrovnik is also situated in a very beautiful part of Croatia, with the hinterland to one side and the Elafiti Islands in the Adriatic Sea on the other.

Enjoy a morning hike to the top of Srd Mountain, a hill above the town. The best view of Dubrovnik is from the hilltop. Visit a museum up there that's dedicated to the war in Dubrovnik in the 1990s. The museum is situated in the old 19th-century fortress, which was built by the French. You have the option to return to Dubrovnik by cable car. Enjoy the rest of the day at leisure.

Check out from your hotel and take a private shuttle to Dubrovnik airport for your onward travels.

The Dalmatia region of Croatia is often called a nautical paradise, and...

Discover the Dalmatian coast while taking advantage of all the outdoor...
Croatia 7-Day Tours & Itineraries

Discover Croatia's Dalmatian culture and gastronomy on this self-guided...

This 10-day multisport itinerary combines culture and history with a...

Pack in 8 days of adventure as you travel from Zagreb to the Dalmatian...

The 6 Best Boutique Hotels in Split

Split is the kind of city you’ll want to take in at your leisure, and...

Croatia is a prime spot for history buffs, with numerous cultural...

How Many Days to Spend in Dubrovnik

Whether you have two days or two weeks, Croatia is a fun and beautiful...

Fairytale like, Dubrovnik is a charming coastal city known as ‘The Pearl...

Where better than Dubrovnik to relax with a drink in hand? With its...

Dubrovnik may have found its most recent fame via "Game of Thrones," but...
Best of Dubrovnik

The Best Things to Do on Hvar

Croatia is a family- and kid-friendly destination, filled with hiking,...

Best Things to Do in Split

Split is Croatia's second-largest city, complete with a vibrant...

This active adventure takes you through one of Croatia's most beautiful...
Best of Hvar

How Many Days to Spend in Croatia

Eat and drink your way down Croatia's Dalmatian Coast on this 9-day...

Erika F.
California, United States
"I'll start by saying that I have never used a tour guide or a tour company prior to working with Robi through KimKim. But, once I started sharing the type o..." read more
Traveled to Croatia as a family in June, 2022
Create your custom-made trip to Croatia
Get Started