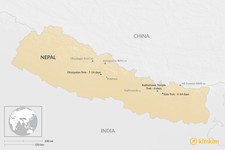 Mads Mathiasen has been trekking through Nepal for 20 years. These days, he does everything from short, child-friendly treks with his young son to rugged wilderness adventures with friends. And he is an expert who plans treks for visitors to Nepal, from first-timers to regular returners.

Mads Mathiasen's specialty: short treks. They allow visitors to get away from the cities and experience the other side of Nepal -- the breathtaking beauty of the landscapes and the incredible warmth of its people. Here are three of his all-time favorites, each with its own special flavor.

Dhorpatan Trek: Get Off the Beaten Path (7-14 Days)

This high altitude plateau in the Western part of Nepal is a spot seen by only a handful of trekkers. Until recently, just getting to Dhorpatan, home to Nepal’s only hunting reserve, required a helicopter ride or a three- or four-day walk. Thanks to all of the new roads built in Nepal in the last few years, Dhorpatan is now only a long day’s drive in a four-wheeler from Pokhara.

Despite that, Dhorpatan remains a destination best for the adventurous trekker. Only 88 foreigners visited the area in 2013 and Mads says the number hasn’t jumped much since then. That means little has been spoiled in this region. The local Magar people are intrigued by outsiders and happy to welcome visitors into their homes. Small groups can expect to spend time sipping tea and sharing a meal in the kitchen. In-home accommodations are limited, so larger groups should expect to camp along the way.

During a week-long trek, you can drink in the unspoiled landscape, see amazing views of Dhaulagiri (the name means White Mountain) and get a chance  to see some rare wildlife, including snow and forest leopards.

After seven or eight days of trekking, you end only a few hours’ drive from Pokhara. This trek is not extreme; first-time trekkers in reasonably good condition and a sense of adventure can get a glimpse of parts of Nepal few other foreigners have seen.

This trek from Kathmandu can be done in as little as four days but there is no shortage of incredible sights to see. Just a half day's drive from the metropolis of Kathmandu is this wilderness trek along a high ridgeline that weaves in and out of the forest. Spend your days looking west to the Annapurna range of the Himalayan Mountains and nights sleeping in a tent—that someone else carried and set up for you before preparing your evening meal.

Look for leopards and the elusive Himalayan Black bear along the trail as you make your way to the famous Kalinchowk Bhagwati temple. Locals make pilgrimages to this Hindu shrine. Chances are you won’t encounter another person along the way until you reach the temple, unless you trek during the summer months when Nepali villagers move their cattle to their summer settlements where the herds graze during the monsoon season.

Once you’ve seen the temple, it’s all downhill from there. Literally. You walk downhill to the town of Charikot, where you can finish up the trek in style by staying a night or two at the amazing Charikot Panorama Resort.

Solu Trek: Get to Know the Lower Everest Region (4-14 Days)

It’s hard to think about Nepal and not conjure up images of the grandest mountain of them all: Everest. This is the trek for visitors who don’t want to climb Everest, but do want to see from land rather than a plane.

This trek also is the best way to get an up-close look at Sherpa culture. Transportation into the area—a paved runway in Phaplu and a new road—means that it is now much easier to do treks of varying lengths, even ones as short as four days.

The area is on the Everest trail from Jiri, so there are comfortable tea houses. Now that most Everest climbers use the trek from Lukla instead, there are fewer tourists in Solu, so Sherpa culture and villages here are still mostly intact. Expect to see monasteries and amazing views of Everest, but at a lower elevation; you don’t have to be super fit to make this trek.