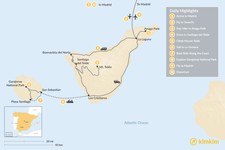 The dramatic beauty of Spain's Canary Islands is the backdrop to this active 10-day itinerary. Starting in Madrid, you’ll have a day to explore the vibrant capital before flying southwest down the coast of Africa to reach the Canary’s largest island of Tenerife. Here you’ll explore black sand beaches, hike through ancient ecosystems, and climb volcanic mountains before catching a ferry to the small, remote island of La Gomera. Discover its pristine subtropical countryside on foot, then set sail for a whale-watching excursion around the dramatic coastline. Your final day takes you back to Madrid for a night on the town as you bid adios to island life.

Welcome to Spain! Upon arrival at the nation's capital, you'll enjoy a private transfer to your hotel in the city center. Take some time to settle in before heading out to explore. You'll definitely want to see some of the highlights like the Puerta del Sol, one of the most historic and expansive plazas in the city. There's also Madrid's famous Fountain of Cibeles. Located in the city center it features a sculpture completed in 1782 and depicting Cybele, the Greek goddess of fertility, riding in a chariot pulled by lions.

Perhaps you could take in a show. Gran Vía is Madrid's answer to Broadway, and on it, you'll find plenty of theaters showcasing plays and musical productions. Needless to say, the options for culture in this city are vast, and you could also visit museums, art galleries, and live music venues if the mood strikes.

When night falls, be sure to indulge in Madrid's world-class culinary scene. If you want to dine amid history, head to Botín. No less than Ernest Hemingway described it in his seminal novel The Sun Also Rises as the best restaurant on earth.

Day 2: Flight from Madrid to Tenerife

It's time to say hasta luego to the Spanish capital and head south to the beautiful Canary Islands. After breakfast, a car will transfer you to the airport where you'll catch a 3-hour flight to Tenerife. Make no mistake, Tenerife abounds with as much energy and excitement as it does tradition and amazing landscapes.

This morning you'll leave your island paradise behind with a ferry from  San Sebastian de La Gomera to Los Cristianos. After catching a departing flight from Tenerife, land in Madrid for your final evening in Spain. Take some time to settle into your accommodation before heading out to explore this diverse marvel of a city. After a quiet week in nature, enjoy the busy energy of the capital with an evening "Paseo" through bustling streets, and a late dinner at one of its many world-class restaurants.

Today you'll bid Spain "adios" and transfer to the airport for your flight home.

Over 10 days you'll embark on a gourmet road trip from Madrid to Spain's...

The dramatic beauty of Spain's Canary Islands is the backdrop to this...

Get lost in La Mancha on a  10-day road trip in this historic region in...
Spain 10-Day Self-Drive Tours & Itineraries

Discover the highlights of Andalucía, from the Mediterranean coast in...
Spain Self-Drive Tours & Itineraries

The Best Hotels in Bilbao

One of this Basque city's most sought-after hotel amenities is a view of...

The Best Boutique Hotels in Mallorca

On a shorter visit to the Balearic island of Mallorca, basing yourself...

The Best Boutique Hotels in Córdoba

Córdoba's hotels reflect the many civilizations that have called the...

The Best Boutique Hotels in Granada

These hotels will help you get in touch with history and Andalusian...

The Best Hotels in Ronda

Lodgings in the capital of Andalusia's "white villages" sit adjacent to...

Located on opposite coasts of northern Spain, Barcelona and the Basque...
Getting Around Spain