Mycenae, the ancient Greek archeological site on the Peloponnese Peninsula, is famous for its role in Homer's Iliad. It was home to the famous Helen, whose husband King Agamemnon led his people to war when she left him for Paris of Troy. That old Mycenaean civilization dominated the western Mediterranean from the 15th to the 12th century BCE. This guided tour includes visits to both it and Nafplio, an ancient seaport town in the Peloponnese. But first up is Mycenae, located about 55 miles (90 km) east of Athens. The stone Lion Gate denotes the entrance to the ruins of this city, beyond which are interesting sites like the tombs of Aegisthus and Clytaemnestra and the Treasury of Atreus. Also, here are the long Cyclopean walls, whose construction method remains a mystery.

Then it's off to Nafplio. One of the prettiest seaport towns in the Peloponnese, it's located a mere half an hour south of Mycenae and was once believed to have been founded by the son of Poseidon. Nafplio was the first capital of the new Greek state after the war of independence in the 1800s. A guided tour includes a stroll through the old town that passes by Ottoman fountains, Venetian buildings, and statues honoring historical figures. The tour ends with a visit to the Bourtzi Castle in the middle of the harbor.

Read more about historical and mythological activities in Greece. 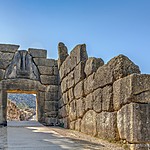 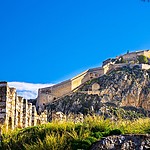 Itineraries with Visit Mycenae and Nafplio 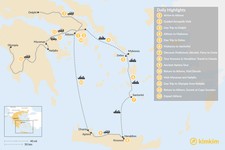 Get up close and personal with ancient Greece on this two-week trip. Begin at the Acropolis and its famous Parthenon before ferrying to the beautiful Cycladic Islands. Archeological stops include the sacred site of Delos, prehistoric Akrotiri, and the Palace of Knossos on Crete. End your trip on the mainland with visits to mythical Mycenae, the original Olympic stadium, and more. 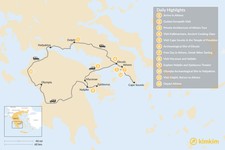 Long dominated by the omnipresent Parthenon, Athens mingles its classical past with a budding art scene and bustling markets. You'll spend twelve days exploring this city's many cultural treasures and cool neighborhoods—along with day trips to archaeological sites in nearby Eleusis, Mycenae, Epidaurus, Olympia and Delphi. See why the epicenter of antiquity and philosophy is well worth a trip today. 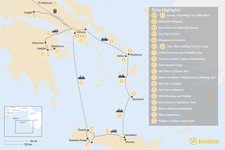 Three weeks gives you enough time to take in Greece from all angles. Survey the city of Athens from atop the Acropolis before you move to Mykonos and Santorini for farm dinners and caldera cruises. Crete awaits next, full of stone villages to explore, before you return to the mainland to travel back in time to famous spots like Delphi, Meteora, and Mycenae. 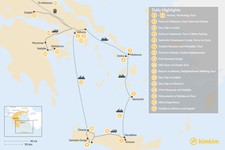 Explore Greece from the top down, starting up on the Athenian Acropolis. After a mythology tour of the city, head to the Cyclades to see Mykonian farms, archaeological sites, and the famed Santorini caldera. Spend four days on Crete and return to the mainland to learn the ancient myths of Delphi, Meteora, and the Peloponnesian peninsula. 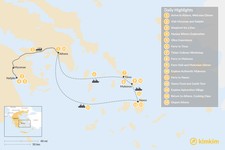 Get up close with Greek cuisine on this 15-day itinerary.  You'll start on the mainland, exploring olive groves, vineyards, and farms to get the full picture of the food chain. Then sail south to the Cyclades, where you'll see those ingredients in action in cooking classes, food tours, and fresh farm dinners.

Mycenae and Epidaurus Tour on the Peloponnese

Step back in time and combine two of the most impressive archeological...

Discover the streets and monuments of Nafplio, the first capital of...