Step back in time and combine two of the most impressive archeological sites in mainland Greece: the Acropolis of Mycenae and the Sanctuary of Asklepios at Epidaurus.

You'll start with a visit to the impressive Acropolis of Mycenae, a massive monument built before 1100 BCE. If you're a fan of Homer's "The Iliad," you may recognize the name. Mycenae's King Agamemnon led the Greek armies to the War of Troy on behalf of his brother Menelaos to bring back his beautiful wife, Helen.

You'll start the tour at the Treasury of Atreus, where you'll find the Tholos Tomb belonging to King Agamemnon. The size of the tomb and the Cyclopian walls along the perimeter are quite impressive for their time of origin. Step through the Lion Gate and visit the ruins of the palace and the castle. Your guide will share interesting stories about the site's history and cultural significance.

Then explore the various artifacts revealing the Mycenae civilization's everyday life. You'll quickly understand why it was called "rich in gold" and learn about the city's olive oil production from the Bronze Age.

Next, head to the Sanctuary of Asklepios at Epidaurus, where you'll discover the site's unique history and significance. These ruins are known as the world's starting point of medicine when practiced as power and given to humans as "God's knowledge." This UNESCO World Heritage site includes several monuments and ruins, perfect for a little exploration!

Your guide will take you through the ruins, starting with the Temple of Asklepios and the Temple of Artemis. You'll then visit the Tholos, the Ceremonial Hall, the Stadium, the Greek Baths, and the Stoa. You'll learn about how the site functioned in terms of medicine, often compared to a hospital or "holistic therapeutic center." The entire complex is a significant testimony to the healing devotions of ancient Greeks and Romans.

Next, visit the Ancient Theater of Epidaurus, known for its perfect acoustics. This is the best-preserved theater of its time in ancient Greece. The Greeks performed many plays here, during celebrations and events, and as part of the Sanctuary's regular healing traditions. During the summer months, you can watch a play on Friday or Saturday evening, as part of the Athens & Epidaurus Festival.

Read more about unique activities in the Peloponnese and interesting historical and mythological experiences in Greece. 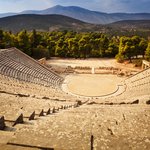 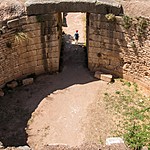 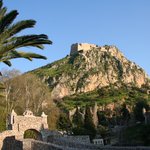 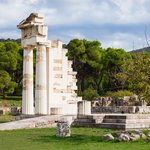 Itineraries with Mycenae and Epidaurus Tour on the Peloponnese 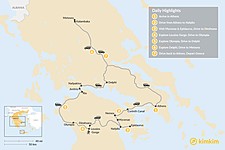 History buffs who prefer to be outdoors can experience the ancient world on this tour of mainland Greece's top classical sites. From Mycenae to Meteora, you'll visit ruins spanning back across the ages: sample the descendants of millennia-old grapevines in Nemea, see where the tale of the Iliad started at Mycenae, and tread on the same ground as the first Olympic athletes. End the trip hiking around Delphi and Meteora's six active clifftop monasteries, surrounded by Mediterranean landscape. 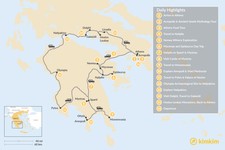 On this 16-day road trip of Athens and the Peloponnese, you'll see historical sites, sample local flavors, and discover beautiful castles and monasteries. Spend a few days in the capital learning about the Acropolis and enjoying culinary delights of the modern era. Then make your way west for wine tasting in Nemea, stops at several archaeological ruins, and visits to charming villages before ending your journey back in Athens. 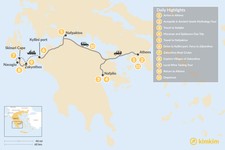 Some of the most dramatic feats of athleticism of the ancient world took place at Olympia, but you won't need to train quite at that level to take on this 11-day itinerary. After hearing the myths of the Acropolis, your tour will take you to seaside Nafplio, historic Mycenae, and the former stadium grounds at Olympia. Then head to the island of Zakynthos for four nights on the seashore before you return to Athens.

Mycenae, the ancient Greek archeological site on the Peloponnese...

Discover the streets and monuments of Nafplio, the first capital of...

Explore the incredible natural environments of Greece in a special way,...

Enjoy a family-friendly boating adventure in the Corinthian Gulf, a...

Cruise along Santorini's famed caldera with this lunch cruise aboard a...
Show more Greece experiences