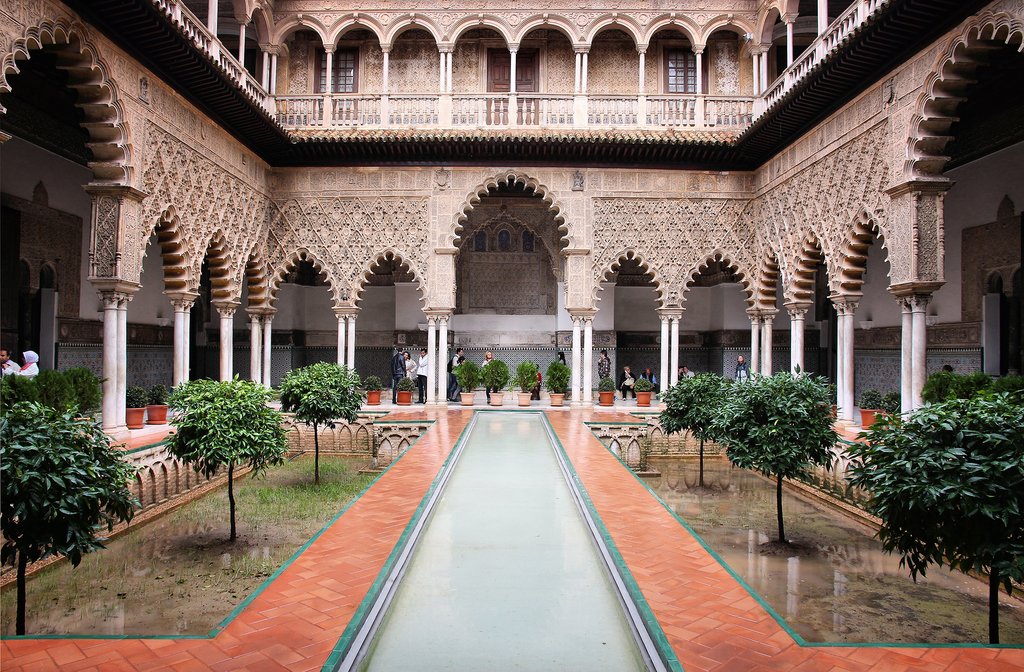 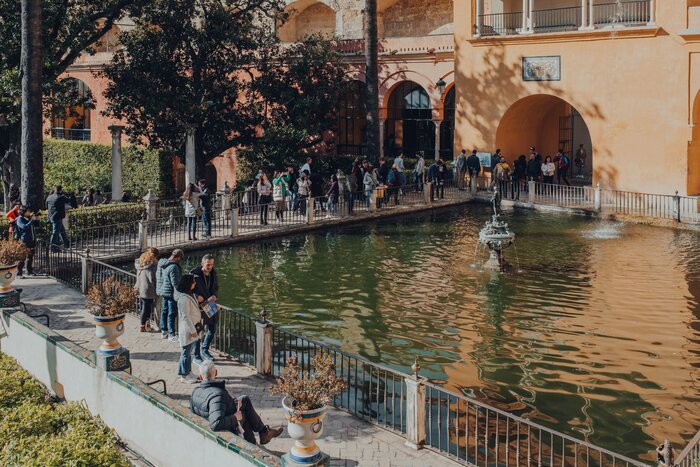 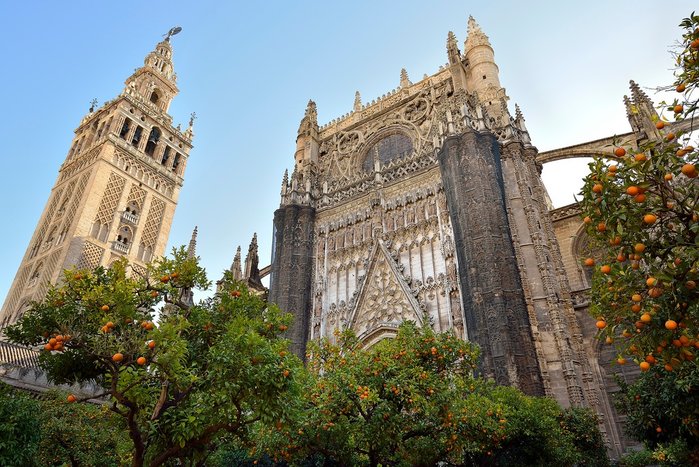 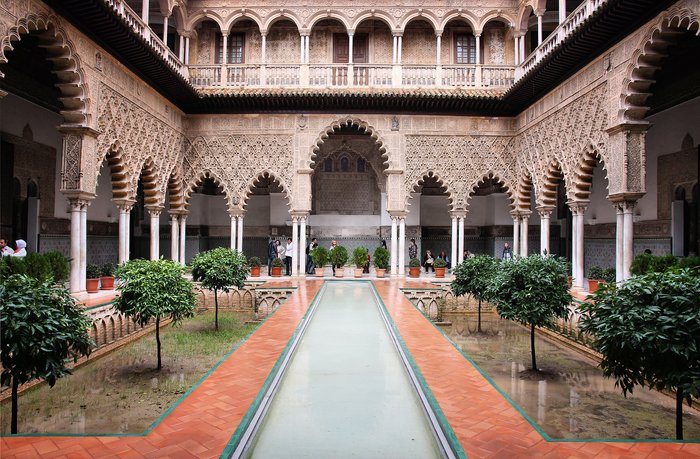 The courtyard of the Alcázar of Seville

Let a personal guide show you the world's largest Gothic cathedral and one of Spain's best examples of Mudéjar architecture.

Join a private guide and visit Seville's most important monuments: Seville Cathedral and the Royal Alcázar. You'll skip the long lines and enjoy a personalized experience that digs deep into the city's history and cultural heritage. Start by meeting your guide at the cathedral (the world's largest Gothic cathedral and a UNESCO World Heritage Site) and climb the bell tower, La Giralda, for incredible city views. Then make your way to the Alcázar, a royal palace commissioned for King Peter of Castile, replacing the original Moorish fortress and offering one of the country's best examples of Mudejar architecture.

Know before you go

Recommended for
All ages

You'll visit Seville's two most iconic and important monuments, the Seville Cathedral and the Royal Alcázar of Seville, with a personalized experience and private guide. After meeting your guide at the base of the La Giralda bell tower, you'll start your journey into the city's unique and diverse history and cultural heritage. First, learn about the cathedral's origins, built on the site of a former Moorish mosque. The Catholics took the mosque from the ruling Moors in the 13th century, destroying its entire structure except for the Patio de los Naranjos (the orange courtyard) and the Giralda tower, which was originally the mosque's minaret. It took over 100 years to fully construct the cathedral, finishing in the early 16th century.

As your guide will explain, understanding the structure's history helps when observing its exterior. Also known as the Catedral de Santa María de la Sede, this is the largest Gothic Cathedral in the world, a massive structure at over 400 feet (127 m) long, 272 feet (83 m) wide, and 141 feet (43 m) high. You can walk around to view its four directional facades and 10 doors. The main Door of Assumption is the largest and on the West Facade, though its Door of the Conception is probably the most recognized, as it opens up to the Patio de los Naranjos.

After observing the exterior, head inside to check out the impressive interiors of the cathedral. Besides its 80 chapels, two intricate organs, altarpiece, and art collection, you'll also find the tomb of Christopher Columbus inside. View the bronzed coffin, plus paintings by Murillo, Goya, Pedro de Campaña, and Luis de Vargas, the Royal Chapel (Capilla Real) dedicated to King Ferdinand III of Castile, and the Treasure Room.

Finish your time at the cathedral by climbing the looming bell tower, La Giralda. Then, on your way out, follow your guide through the picturesque Patio de Los Naranjos, the church's courtyard filled with orange trees.

Next, take a quick stroll to the Real Alcázar de Seville, just a few minutes away by foot. Alcazar means "castle" in Spanish, derived from an Arabic word. This makes sense, as the Moors built the fortress in the 11th century. But after the Christian reconquest, King Peter of Castile commissioned the building for a palace, assembling the current structure over the former Muslim site. As a result, your guide will show you how the palace is one of Spain's best examples of Mudéjar architecture, a renowned style found throughout Spain using influences from Moorish and Christian culture.

As you stroll through the complex with your guide, there are plenty of places to stop and learn about the structure's history and cultural importance. The fortress has impressive interiors and stunning gardens, including the Patio of the Virgins with its elongated pond, serrated arches leading to adorned reception rooms, and the Salón de Embajadores (Ambassador's Hall) with its dome of carved cedar wood. There's also the Casa de Contratación, where the country managed trade with the Americas. Your guide will also take you through the palace's complex of intricate gardens with Moorish and Renaissance architectural styles, ponds, fountains, fruit trees, lush plant life, shaded paths, pavilions, and resident peacocks.

At the end of your excursion, your guide is happy to leave you with time to continue enjoying the gardens on your own. Take some time to sit on a bench and listen to the birds in the trees and the murmuring fountains.

Explore Spain's lively cities and vibrant culture, starting with a gourmet food tour in Madrid and a flamenco show in Seville. Stop in Córdoba to tour the Mezquita, then discover Granada's most popular site, the Alhambra and Generalife Gardens. Meander the historic district of Albaicín with a personal photographer before ending the trip in Barcelona by touring the works of Gaudí and enjoying a day trip.

This 3-week tour takes you from Madrid in Central Spain to Cádiz in the south, stopping along the way to enjoy personalized walking tours in cities like Barcelona, Valencia, Málaga, Granada, Córdoba, and Seville. Experience the best of Spain's architecture (like the works of Gaudí in Barcelona), art (like the Picasso Museum in Málaga), and history (like the distinctive cultures of Toledo) while enjoying organic wine tasting, hiking in the scenic karst region, and visiting unique towns in Andalusia. 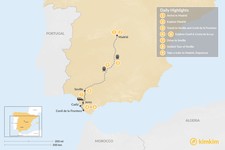 This nine-day itinerary combines world-class museums in Madrid, beautiful beaches in Costa de la Luz, and elegant winding streets in Seville. With various travel modes (including a rental car), you'll get the chance to explore Andalusia's untouched coastline along Europe's southernmost tip at your own pace. You can also take advantage of private guided tours for the best local advice, including tapas bars and wine producers.

Take a break from the real world and lose yourself in Spain's rich culture over five brisk days. You'll arrive in Madrid and immerse yourself in history while also learning how to prepare a mean Sangria. Then you're off to Seville, capital of Andalusia, where you'll tour its ancient alcázars and cathedrals plus enjoy a live flamenco performance you won't soon forget.

This 6-day trip is the ultimate introduction to Spain's southernmost region. Kick off in Seville for UNESCO-listed sites, tapas bars, and flamenco dancing. Then drive to the picturesque town of Córdoba—former stomping ground of Christopher Colombus. Finish the adventure in coastal Málaga for Picasso culture and fresh seafood.

Dig deep into Spanish culture and enjoy a quintessential evening with...

Cruise along the Guadalquivir River as you carve your way around the...

If you've ever wondered how experts restore artwork from millennia ago,...

Discover one of Barcelona's most popular drinks: vermouth. A passionate...

Enjoy a special visit to the Sagrada Família, a stunning Roman Catholic...

Just outside of San Sebastián is a rural cheese factory that creates one...

Enjoy a truly cultural experience by learning how to prepare and cook...
Show more Spain experiences

Seville offers the perfect mix of culture, architecture, and gastronomy....

Spain is an ideal road trip destination, and these five itineraries...

The 7 Best Boutique Hotels in Seville

By staying in boutique lodgings, you'll get a more personalized stay...

Seville is Southern Spain's jewel and the capital of Andalucía. This...
Best of Seville