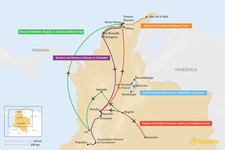 In a 12-day trip, you can comfortably combine the cultural highlights of Colombia's cities with exploration in national parks. Strike your perfect balance with the itineraries below. Tour Medellín, Bogotá, and Tayrona National Park, or divide your time between the Amazon and the Andes. Check out wildlife sanctuaries and indigenous villages, discover the beaches and history of the Caribbean coast, or get off the beaten path in Santander, a true adventure hub.

See the best of Colombia, from the cosmopolitan cities of Bogotá and Medellín to the beaches of Tayrona National Park, on this wide-ranging trip plan.

Begin the trip in Bogotá. Start in Plaza Bolívar, the city's main square, which dates back to 1539. You'll see street art and busy marketplaces on a city tour, then experience the nightlife scene after dark. On day three, catch a flight to Medellín. During a guided tour of the city, you'll stop at key attractions like Botero Square and the Botanical Garden, home to thousands of varieties of flowers. On day five, you'll move to Cali, located in the country's south, where you'll take a salsa dancing class and hit the club scene afterward.

The next part of the trip takes you to the coastal city of Santa Marta, gateway to Tayrona National Park. Spend a few days hiking through the park's forested trails and sunbathing on deserted stretches of coastline. On day nine, drive to Minca to visit a coffee farm and learn about the process behind one of Colombia's most celebrated exports. You'll have an early wake-up call the next day for a sunrise birdwatching tour. Then head to Cartagena de Indias, a Spanish colonial gem protected by ramparts and partly bordered by crashing waves. Tour the Old City on the last full day of the trip, stopping to try fresh-squeezed juices and shop for handicrafts made by local artisans. Learn more

This busy itinerary features stops in Bogotá, the Amazon, Colombia's coffee-growing country, the little-known region of Guaviare, and the colonial fortress city of Cartagena.

Arrive in Bogotá. After an evening in the city and stops at key attractions like the Gold Museum and the colorful neighborhood of La Candelaria, you'll fly to Guaviare and ride in a 4x4 into the Serrania de La Lindosa mountain range. Visit Tranquilanda, noted for its red river, and the City of Rock monument before checking out Tuneles Naturales del Guaviare, a dramatic series of rock formations. You'll see rock art at Cerro Azul and visit an indigenous reservation before moving onto Colombia's coffee-growing region.

Midway through the trip, you'll go on a hike in the Cocora Valley, passing the world's tallest palm tree and the Acaime nature reserve along the way. Then fly to Santa Marta and drive into Tayrona National Park, where you'll hike along the beach and see the Pueblito Ruins. Finish up the trip with a couple of days in Cartagena, where you'll learn about the city's turbulent history on a guided tour, watch local musicians perform in front of a backdrop of vibrantly hued buildings, feast on fresh fruit and ceviche, and have drinks near the city's old ramparts at night. Learn more

Explore the Caribbean coast, coffee farms, and colonial cities on this trip plan that takes travelers to many of Colombia's key cultural highlights.

Kick off the trip on the Caribbean coast. Arrive in Santa Marta, then head into Tayrona National Park for a few days of exploring forested coastal paths and seeing exotic birds in their natural habitat. You'll visit the Pueblito Ruins and go on a river tubing excursion, then have a free day to relax on the beach before catching a flight out of the region on day six. The next part of the trip takes you to Zona Cafetera, the country's coffee-growing area, where you'll tour a coffee farm, overnight in Pereira, and spend time hiking through the Cocora Valley.

On day eight, enjoy a mountain biking excursion in the Santuario de Fauna y Flora Otún-Quimbaya wildlife sanctuary. Go birding in the rainforest, then transfer to San Andrés de Pisimbala, a jumping-off point for visiting the Parque Arqueológico Nacional de Tierradentro (Tierradentro Archaeological Park). Dating from 700 CE, the park is famous for its painted underground burial chambers. They're known as hypogea, and some are as wide as 39 feet. The hike is challenging but worth it. You'll stop in the colonial settlement of Popayán on your way back to the airport to catch a flight home. Learn more

If you're up for an aquatic adventure — with opportunities to dive, snorkel, swim, and sunbathe — this active itinerary along Colombia's Caribbean coast is the one for you.

The journey begins in the beautiful seaside city of Cartagena. Stroll through the cobblestoned streets and plazas, then stop for tropical drinks on the old ramparts by the water. On day three, you'll side-trip to the quaint fishing village of La Boquilla. Head back to Cartagena for the night, then drive to Santa Marta — known as the oldest surviving city in South America — on day four. Road-trip in a 4x4 into the rugged Guajira Peninsula, passing indigenous villages and striking desert scenery along the way. Tonight, you'll sleep in a hammock in the village of Cabo de la Vela.

On day six, you'll continue the adventure on the peninsula, having lunch on a local farm and seeing the sunset from the lighthouse at Punta Gallinas. Head back to Santa Marta, where you'll base yourself during side excursions: first, go tubing down the Río Don Diego river, then head into Tayrona National Park to visit the Pueblito Ruins. You'll have free time in the park for hiking and swimming, then you'll go back to Santa Marta to spend the last evening of the trip experiencing Colombian nightlife before flying out the next day. Learn more

Go rock-climbing, rafting, hiking, and paragliding on this adventurous trip plan centered in the Colombian region of Santander.

Welcome to Santander. You'll begin the trip in Bucaramanga, known for its botanical gardens, pretty parks, and vibrant nightlife. On day two, go rock-climbing at La Mojarra, then visit a local farmers market and a coffee farm. You'll go on a dedicated coffee tour on day three, spending the afternoon in Chicamocha National Park. Adventures await in the region. Depending on your abilities and interest, you can go whitewater rafting — you'll have three rivers and Class IV-V rapids to chose from — or try waterfall rappelling and explore water-filled caves.

In the second part of the trip, get to know Guadalupe and the natural pools around Las Gachas. You'll move onto Barichara, famous for its colonial architecture, then try paragliding over Chicamocha Canyon. You'll have a full day in Bucaramanga before taking a boat tour of Lake Topocoro. Spend time touring a family-run farm on horseback or 4x4 before going on a guided visit of a cocoa farm. On the last full day of the trip, wake up in San Vincente De Chucuri and hike in a cloud forest before you head back to Bucaramanga and board a flight home. Learn more

Looking for more inspiration for your Colombia trip? Check out these other 12-day Colombia itineraries, ranging from active, to cultural, to luxury, or family-friendly trips.

Colombia's Department of Santander is the perfect destination for...

This 12-day adventure will take you through the best of Colombia. You'll...

This 12-day itinerary is for those eager for some aquatic adventure. It...