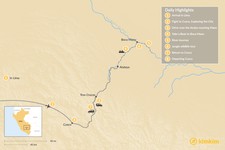 Down in the Amazon basin, off the edge of the tourist map, lies Manu — arguably the most biodiverse area in the world. Trek off the beaten track and into the land of tapirs, parrots, and jungle rivers — a place without luxury hotels, hot showers, or 24/7 WiFi.

Note: The 5-day group departures listed above include the Manu jungle portions of the itinerary below (days 3-7). Our specialists can help you plan the rest of the trip around your chosen departure date.

Day 3: Over the Edge of the Andes

Rise early in charming, cobblestoned Cusco, lace up your hiking boots, and make your way past Incan ruins and historic colonial highland towns to Tres Cruces, where the high altitude Andes suddenly give way to the lush Amazon basin. From here, descend along the Pacific slope to a high-rainforest lodge on the edge of Manu. Leave your bag and grab your flashlight for a night walk through the jungle in search of nocturnal frogs, tarantulas, and exotic insects.

Wake to the sound of jungle birds, strap on your backpack, and make your way deeper into the Amazon, where famous birds like the Hammerhead Gallito de las Rocas (Peru's national bird) abound. Today, your first destination is the frontier town of Atalaya, where an outboard canoe waits to take you into the waters of the Rio Madre de Dios (the "Mother of God River"). Keep your eyes (and your camera lens) peeled for herons, vultures, and crocodiles. When you arrive at your lodge in the evening, another night hike is the perfect time to spot capybaras and caimans (crocodiles).

Day 5: River Journey Through the Heart of the Jungle

Now deep in the Manu Buffer Zone, keep an eye out for diverse wildlife — from caimans, capybaras, and herons, to macaws and even jaguars. Spend the day traveling downriver by boat to another lodge even deeper in the zone. Keep your camera handy!

Day 6: Get Close to Parrots, Tapirs, and More

On your fourth day in the Amazon, rise early, lace up those hiking boots once again, and make your way on foot and by boat through the jungle to a clay lick and a nearby camouflaged lookout. From here, you'll have an excellent view of parrots, macaws, sloths, and other creatures that come to lick the clay for its mineral content. Take a rest in the hottest part of the day, then take to the trails again in the afternoon, hiking to a tapir lookout where you'll settle down in sleeping bags and mosquito nets to watch for these shy, nocturnal creatures late into the night.

Day 7: Back to Cusco

It's time to bid Manu "adios" and make your way out of the jungle and back home. Spend your day journeying by boat to the jungle outpost of Colorado, then continuing by vehicle back to Cusco. Keep your eyes trained on the surrounding jungle — there are plenty of opportunities for wildlife spotting along the way! Herons, flycatchers, and hummingbirds are all common here.

Today is your last day in Peru! You will be met at your hotel for a transfer to the Cusco Airport, where you will transfer to your international departure. ¡Buen viaje!

Note: The 5-day group departures listed below include the Manu jungle portions of the itinerary above (days 3-7). Our specialists can help you plan the rest of the trip around your chosen departure date.

The Santa Cruz four-day trek takes you high into the Cordillera Blanca...

Experience the rich culture, tastes, and history across Peru and Bolivia...

During this 12-day journey, you will witness the rich culture, history,...

Witness the ancient beauty and natural wonders of Peru and Bolivia...

Immerse yourself in the culinary delights, outdoor wonders, and cultural...

Immerse yourself in the beauty and culture of Peru's Sacred Valley on...

Sachin V.
Texas, United States
"Thanks to Liz! for an AMAZING trip! For this once in a life time trip, we entrusted Liz at KimKim.com to plan our trip. This is our second trip with KimKim ..." read more
Traveled to Peru as a family in November, 2021
I
Isaiah N.
Washington, United States
"We had an incredible experience working with Kristy from the very beginning. Kristy answered all of our questions and was always very attentive when we were..." read more
Traveled to Peru as a couple in December, 2021

Martin M.
New Jersey, United States
"This trip by far exceeded all our expectations. We spent 16 amazing days in Peru with our 3 boys, great guides and meticulously prepared itinerary which open..." read more
Traveled to Peru as a family in August, 2021
Plan your trip to Peru
Customize your trip with help from a local travel specialist
Plan Your Trip