You can’t visit the Land of Fire and Ice without getting to know Iceland’s famous Volcanoes. Sure you could drive to them and look from afar, but where’s the fun in that? Here are 9 unique ways to experience the best Volcanoes in Iceland (plus a bonus if you keep reading!).

Iceland Volcanoes 101: Iceland is home to roughly 130 volcanoes, 18 of which have been active in the past 100 years. The country is rich in geothermic activity thanks to the Mid-Atlantic Ridge, where the tectonic plates of North America and Eurasia meet. After Eyjafjallajökull’s flight-grounding incident of 2010, tourism in Iceland has erupted with a sense of adventure and wonder. But enough information and great puns, time for some adventures! 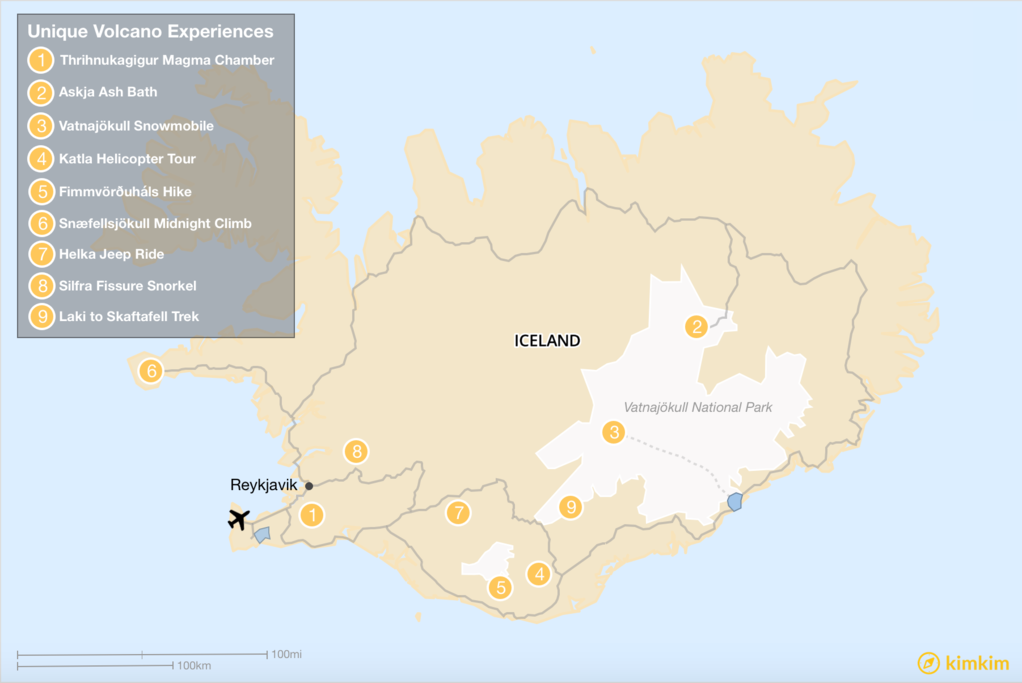 Yes, you read that correctly. Starting in 2012 you can descend into Thrihnukagigur (Þríhnúkagígur) and explore the spacious magma chamber from the inside. After a 2 mile hike you will take an elevator into the magma chamber (sans magma). This volcano has been dormant for 4,000 years, and the last eruption created 3 large chambers. Once on the bottom you can walk around the space of about 3 basketball courts (50x70 m, 160x220 ft) up to 200m, 700ft deep. The chamber could comfortably fit the entire Statue of Liberty. The heat and pressure created beautiful colors in the rock--take as many pictures as you like, just don’t take any souvenirs with you.

Notice a theme? Don’t worry, you won’t go inside every Volcano. The Víti crater (meaning “Hell” in Icelandic) was formed in 1875 during a powerful eruption of Askja. The crater filled with water, and today visitors can take a dip in the milky blue lake inside. Cover yourself in white ash from the bottom of the lake and try to forget the smell of sulfur for a bit. Getting to the geothermal pool requires a 4x4 vehicle and a little bit of a hike.

3. Snowmobile over Grimsvotn and Bardarbunga on Vatnajökull Glacier

Remember, Iceland is the Land of Fire and Ice. Vatnajökull National Park on the south shore is home to many wonders, some of which you can’t see. Grimsvotn and Bardarbunga, both active volcanoes, are deep below the ice. The Grímsvötn volcanic system is one of the most volatile in Iceland. When it erupts, ice quickly melts, resulting in huge ash clouds (Bardarbunga’s last eruption was in February 2015). In the late 18th century the ash and gasses led to a famine that killed 25% of Iceland’s population (smaller at the time). But don’t worry, you’ll have a fast snowmobile!

Katla is located on the Mýrdalsjökull glacier in the south and causes major floods when it erupts. The last major eruption was in 1918 and devastated farms and houses nearby. Scientists believe another one is due soon, so you may want to play this one safe and see it from the sky on a Helicopter Tour. If that’s still too close for comfort, you will get a great view (from a distance) while on the Fimmvörðuháls hike (up next).

The 25km hike in the Fimmvörðuháls region between the Eyjafjallajökull and Mýrdalsjökull Glaciers is one of the most beautiful in Iceland. The trail has 2 recent additions: craters Magni and Móði (named after the sons of Thor) which were created in 2010 during the Eyjafjallajökull eruption. It also offers great views of Katla, Iceland's most dangerous volcano which is currently overdue for an eruption. If you prefer to complete the hike in 2 days rather than 1, you can stay in a mountain hut along the trail. Read more details about the Fimmvörðuháls hike.

6. Take a Midnight Journey to the Center of the Earth on Snæfellsjökull

If you’re ready for some less-active volcanoes, Snæfellsjökull is a great start--it last erupted 2000 years ago, give or take 150 years. If the name sounds familiar, you may be a Jules Verne fan.  JV made it famous as the entrance in Journey to the Center of the Earth. Today you can climb to the top, and if you visit in June or July you can take advantage of the extremely long days and climb at midnight. In 2012 the summit was ice-free for the first time ever.

7. Drive through the “Gateway of Hell” and up Helka

Hekla is one of Iceland’s most regularly active volcanoes, last erupting in 2010. If that gives you some comfort, you should know that its eruptions average every 10 years, and scientists say that it’s overdue.  When it does erupt, the ash cloud is not expected to be as big as the one by Eyjafjallajökull in 2010 that grounded all European air traffic. Play this one on the safe side and opt for a high-powered offroad jeep and drive straight up to the top...and then back down. While you’re nearby, be sure to explore the Landmannalaugar region which has great hikes, waterfalls, and much more to offer.

8. Snorkel between continents at the Silfra Fissure

Visit Thingvellir National Park to see the source of Iceland’s geothermic activity. Here you can swim between 2 continental plates, North America and Eurasia, which split at the Mid-Atlantic Ridge. Each year the plates drift apart by 2cm, which builds up tension creating earthquakes and other geothermic activity. Go for a snorkel (or a scuba if you have a license) and experience the crystal clear, deep blue water at a refreshing 2C/35F degrees (don’t worry, they have dry suits).

9. Sleep on the World's Most Deadly Volcano

If you made it this far why stop now? Take a 9-day trek from Laki to Skaftafell for an immersive adventure into Iceland’s wild side. The Laki Volcano holds the title of “most deadly volcano in historical times”. Over the course of 8 months from 1783-84 the poisonous gas from the eruption killed over 50% of the livestock in Iceland. The eruption lowered global temperatures which caused crop failure in Europe and droughts in India, which lead to an estimated 6 million deaths globally. Doesn’t that make you want to sleep on it?

(Bonus) Ride on a Horse over Lava

Don’t worry, the horses have thick hoofs. And the lava fields are cooled by now. Explore the stunning geothermal valleys at the outskirts of Rekjavik. Bathe in hot springs, wander through meadows, and enjoy a slower pace for an afternoon as you question your past decisions.

The best of eastern and southern Iceland awaits on this 11-day...

Travelers with 12 days to spend in Iceland have plenty of options. You...

Follow an arc from eastern to western Iceland via the north coast on...

Packed with exciting activities from the off-beat to iconic experiences,...

Explore the wonders of western and southern Iceland on this...

Pamela S.
New York, United States
"We had such an incredible trip to Iceland. Even though it was short we managed to squeeze in so many fun activities. We ended up going to the sky Lagoon inst..." read more
Traveled to Iceland as a family in August, 2022

Kevin S.
Colorado, United States
"Michele, our local specialist was fabulous! He went out of the way for us when we were called home early due to some issues at home. He made all the last m..." read more
Traveled to Iceland as a couple in July, 2022
Create your custom-made trip to Iceland
Get Started