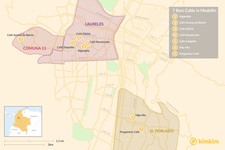 A decade ago it was difficult to find gourmet coffee in Medellín, but today, Colombia’s second-largest city is at the forefront of the country’s caffeine scene—making it a perfect precursor to an adventure in nearby Coffee Country. Here are seven cafés guaranteed to delight even the most discerning coffee fiends.

Most Paisas (the people of Antioquia province) are wed to their tinto, a small watery black coffee that is a quick pick-me-up and usually sold on the street. Often the tinto will be made with Nescafé instant coffee. But Medellín is a forward-thinking city, now bursting with cool bars, restaurants and, increasingly, cafés to make Juan Valdéz proud. Below, we profile our top seven independent cafés, from trendy specialty shops in the upscale El Poblado and Laureles districts to a community café in the formerly neglected Comuna 13 barrio.

After trying these cafés, you'll likely be inspired to head into the Eje Cafetero (Coffee Region). Here are some tips for traveling in the region. And if you need a bite to go with your coffee, check out this article for Medellíns best dining experiences.

This small coffee shop, in the hip residential Laureles neighborhood, offers a gigantic cup of brew that draws the city’s coffee-loving expats in droves. Charming and unpretentious, Algarabía is a cozy cubbyhole café with a relaxed neighborhood vibe. Its location near Parque Primera makes for great people watching, too. For added charm, one wall is painted with a map of the Laureles neighborhood, and the owners even organize walking tours of the area. They also pride themselves on their awesome pastries and desserts, such as macarons.

A coffee shop couldn’t be more endearing than Café Aroma del Barrio, in the heart of the infamous Comuna 13 neighborhood. The baristas here know how to prepare great cappuccinos, limonada de coco (coconut limeade), and other quality coffee drinks with finesse. Once a no-go-zone ruled by criminals, Comuna 13 is a revitalized creative hotbed of entrepreneurship, and the café, located just off Tramo 3 (Flight 3), exemplifies the neighborhood's success. Though tiny, it is hugely popular with visitors, which recently included former U.S. President Bill Clinton. Another reason to visit? You're sure to interact with locals, including youth who perform impromptu song and dance.

Medellín has acquired a large expat community, and foreigners are increasingly stitching their sensibilities onto the quilt of the city. Take French-owned Café Cliché, a delightfully quirky space that’s a bit of the Left Bank in Antioquia. Behind its unassuming red façade, it opens into three distinct areas full of kitschy décor and compelling art. It’s a great spot for dates, as it's open late (though it's closed Sunday and Monday). Owners Adrien, Saran and Sylvain host cool events, from movie nights to French and Zumba classes. Sylvain cooks up a superb European-style menú del día with quiches, tapas, and killer desserts like maracuya (passion fruit) meringue pie, chocolate fondant, and crème brûlée. The coffees are world-class, including their signature Paisa coffee with rum and Chantilly cream.

Plan your trip to Colombia
Customize your trip with help from a local travel specialist.
Plan Your Trip

¡Viva la revolución! is the motto of this little spot (popular among Medellín’s expats) near Parque Primera, in trendy Laureles. Café Revolución was founded by a Canadian-Hungarian couple as one of the city’s original indy cafés, and they now sell their own quality beans from the Tolima district. The café's small size belies an outdoor patio as well as an extensive menu of drinks, from killer specialty coffees and teas to fresh-fruit smoothies. Try the awesome house breakfast—scrambled eggs with toast and a side salad—or the delicious paninis and divine pastries like banana bread and Hungarian beigli.

Yet another expat-owned coffee shop (this one by a German) in Laureles, Café Zeppelin is one of the coolest cafés in Medellín. Certainly, it’s the most off-beat. Here you'll find exposed brick walls and eclectic antique furnishings like an aquarium conjured from a retro TV and a life-size mannequin lamp in the rear patio. You’re spoiled for choice with a huge range of gourmet coffees and teas, including sublime options like coffee with ice cream and even a chai tea shake.

If the need for a caffeine fix strikes while exploring El Poblado, you won’t lack for options. Tiny Hija Mia (My Daughter) is tucked out of view in the Barrio Manila area, but well worth seeking out. Owned by a Colombian-New Zealand couple, it’s named for their daughter. You’ll love its relaxed, peaceful vibe and the peacock-blue velvet seats, and there’s outdoor seating too. The friendly English-speaking baristas brew up some mean coffees, including an almond latte café to die for. A fave culinary highlight is their awesome granola with fresh fruit and yogurt.

One of Medellín’s oldest cafés, Pergamino is still its most popular thanks to a stellar reputation among locals and expats alike. This is one serious (yet relaxed) coffee shop, with a great vibe, fresh-roasted Colombian coffees, and a huge outdoor space for enjoying the sun and the street life.

The owners, the Echevarría family, have been exporting coffee under their own label for some years and sunk big money into creating a sophisticated café, with cream leather booths and blonde hardwood floors, plus vines clambering up a three-story atrium. A quaint touch is that it serves cold-brew coffees and iced lattes in Japanese mason jars. It also sells Ethiopian and other international beans in addition to local coffees. If hungry, grab a salad, turkey sandwich, and scrumptious carrot cake for dessert.