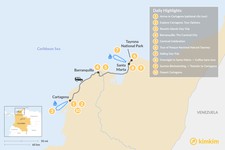 Welcome to Cartagena! This colonial fortress city on the Caribbean is rich in culture, architecture, romance, and even pirate history. Upon arrival, a driver will meet you at the airport and transfer you to your four-star hotel.

Depending on the time of your arrival, you'll have a few options for activities. You can relax and enjoy the hotel amenities or get right into the mix with a neighborhood walk, either on your own or with an English-speaking guide (optional add-on). Here are some other ideas to consider:

Finish the day with mojitos and fresh gourmet ceviche in one of the city’s trendy restaurants or rooftop bars.

After breakfast, take your pick of numerous ways to experience Cartagena, either on your own or with a private tour (optional add-on). Maybe a surfing excursion on the coast, or a day lazing on the white sands of Playa Blanca, or even a sunset sail with a glass of bubbly.

If an organized tour isn’t appealing, simply create your own adventure around Cartagena. At dusk, take part in the sultry coastal atmosphere as the city comes alive with street performers and musicians.

After an early breakfast, you'll transfer from your hotel to the pier where you will board a speedboat for an hour trip to the Barú Peninsula. Along the way, you will see Tierra Bomba Island and Boca Chica, ancient forts that once protected Cartagena from hostile invaders.

After arriving at the Rosario Islands, change into your swimwear and head to Playa Azul, a crescent beach with soft white sands hugging the turquoise Caribbean Sea. After enjoying a buffet lunch, you will have time to relax and sunbathe. An optional add-on is to rent a kayak and embark on a two or three-hour paddling excursion before returning to Cartagena in the late afternoon. A car will pick you up at the pier to take you back to your hotel.

Situated between Cartagena and Santa Marta, the coastal city of Barranquilla is home to the country's biggest street party, carnival. If you come during the time of this celebration (four days before Ash Wednesday) you'll find Barranquilla rollicking over four intense days of partying and festivities. This is South America’s second largest carnival celebration behind Rio de Janeiro.

Note: If you're visiting when Carnival is not taking place, Barranquilla is still worth checking out. The birthplace of pop star Shakira has some trendy neighborhoods, like El Prado, where you can pop in at a cafe for some Colombian coffee. There are also popular restaurants, like La Cueva, which over half a century ago was a favorite haunt of a young Colombian journalist named Gabriel García Márquez.

Today you'll have a chance to partake in Barranquilla's Carnival festivities. This is a free day and those in the thick of things should expect to let loose. You can watch the colorful Gran Parade, dance along to the infectious salsa music, and join the fun!

After breakfast, you'll be picked up from your hotel in Cartagena for your private car transfer to the area just outside the entrance of Parque Nacional Natural Tayrona's (Tayrona Park), where you'll stay overnight.

You'll have rest of the afternoon to relax and enjoy your hotel, located on a peaceful spot overlooking the Caribbean Sea at the foot of the mountains. Wander down to the nearby beach, which has a beautiful sunset view, before dinner is served on-site for all guests of the hotel.

Today, it's time to dust off those sea legs. After breakfast, you'll head out for a sailing trip on the Caribbean where you can relax and partake in a range of water activities like kayaking, snorkeling, and scuba diving. This area of Colombia is known for its various bays and secluded beaches, so take advantage of the protected coastline as well as the nearby coral reef system, which boasts a highly diverse marine habitat.

After the excursion, you'll be transferred to your hotel near Tayrona Park where you'll have time to watch the sunset and enjoy dinner served on-site.

After breakfast, a driver will meet you for your transfer to Minca, a mountain village located on the coastal hillside. Tucked away in the Sierra Nevada mountains, remote Minca is seemingly a world away from the bustling city of Santa Marta just down the Caribbean coast. It's also at altitude, so remember to bring an extra layer or two as the temperatures here are cooler than they are at sea level.

Your Minca adventure includes a half-day tour by 4x4, and you'll start at one of the working coffee farms in the region. After learning about the production process (and enjoying complimentary tastings), you'll visit the natural swimming hole of Pozo Azul for a refreshing dip, so bring your bathing suit!

Enjoy some free time and have lunch on your own before you embark on an afternoon walking tour of Minca's town center. Alternatively, visit the hummingbird balcony at Hotel Minca, where you can relax and observe the hundreds of hummingbirds that feed there.

(Optional add-on.) There's also a full-day excursion that includes a trip to the stunning waterfall of Marinka, as well as a driving tour of the area with beautiful views of Santa Marta.

After an early breakfast, experience the biodiversity of Minca's surroundings with this unique birdwatching excursion. The area's dry tropical forest is a haven for many species of the country's whopping 2,000 species of birds. You will leave from Minca at dawn on a moderate hike through the forest. During this time your local guide will point out a wide variety of rare and exotic species such as the keel-billed toucan, golden-winged sparrow, black-backed antshrike, and the rosy thrush-tanager.

After lunch on your own in Minca's village, you'll transfer by vehicle to Cartagena de Indias.

It's time to say goodbye to Colombia! After breakfast, enjoy your last moments of Cartagena in a patio café. Or, if you haven't already, explore the bulk of the city on a guided tour. Otherwise, take one last stroll along those cobbled streets.

Enjoy Cartagena's cobbled maze of vividly colorful houses and ancient squares dating from the 16th century. Meander through the colonial neighborhoods of San Diego and Santo Domingo while learning about important historical sites like Saint Philip's Castle. Maybe pay a visit to the Palace of the Inquisition in Plaza de Bolívar, which was once the seat of the Holy Office of the Inquisition and is now a macabre museum.

A representative will meet you at your hotel and drive you to the airport for your return flight home.

Experience stunning highlights along Colombia's northern coast in this...

Check off three unforgettable cities on this whirlwind 10-day tour...

This tour takes you through three of Colombia's most diverse and...
Colombia 10-Day Tours & Itineraries

With 10 days, your family can easily combine three or more areas of...
Make The Most of Your Time in Colombia

With the summer tourist crowds gone and not to be seen again until...

You won't find a more festive month in Colombia than December. Everyone...
Colombia Travel Advice

Top 10 Things To Do with Kids in Cartagena

With its colorful street life, intriguing colonial history, and tons of...

Top 10 Things To Do with Kids in Medellín

Medellín is a fabulous place for families with kids—from bicycling in...
Colombia Family Travel

This 4-day excursion into the Amazon will give you a taste  of one of...

On this eight-day excursion, you'll visit Bogotá, the largest city in...

How Many Days Should You Spend in Colombia's Coffee Region?

Colombia is world-renowned for its coffee, and most travelers want to...

How to Get from Minca to Tayrona National Park

The journey from the coffee fields of Minca to the beaches in Tayrona...

The distance between Bogotá and Leticia, the gateway city to the...