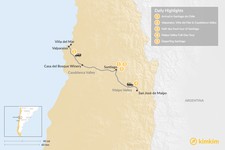 If you want to experience some of the highlights of Chile but are limited in terms of time, then this brisk five-day jaunt is perfect for you. You'll arrive in the capital of Santiago and explore the city on foot, taking in the major sights. Then it's off to the coast for some wine tasting and an exploration of the most romantic city in the nation: Valparaiso. After a tasty food tour of Santiago, you'll finish your time in the country with a road trip into Chile's central mountains. Enjoy!

For dinner be sure to get out of the hotel and enjoy a culinary adventure in the city. In recent years Santiago has emerged as a global foodie destination. Chilean chefs are reinventing traditional dishes like empanadas, cazuelas (stews) and seafood with ingredients harvested all the way from the northern deserts and southern Patagonian regions. You can find great restaurants and wine bars not only in the Bellavista neighborhood but also in the revitalized historic barrios of Yungay and Italia.

After breakfast, you'll depart from your hotel in Santiago and drive about an hour west towards the coast. Your destination is the Casablanca Valley, which is home to many top wineries. Here you'll take a tour, tasting, and enjoy lunch at the wonderful Casa del Bosque Winery.

After lunch, you'll continue the short distance to the coast and the cities of Valparaiso and Viña del Mar. First up is the port city of Valparaiso, a UNESCO World Heritage Site famous for its colorful hillside neighborhoods, winding stairways, and abundance of street art. It's a throwback to a time when electric trollies coasted along the waterfront and funicular elevators carried people high into the hills. On a city tour, you'll visit some famous sites, such as Plaza de la Victoria and the Naval Academy, and ride a funicular high into the hills where panoramic vistas of the bay await. A real highlight is visiting the former home of Chile's Nobel Prize-winning poet, Pablo Neruda.

Afterward, you'll drive a short way to the adjacent town of Viña del Mar, which couldn't be more different in terms of style than its neighbor. Whereas Valparaiso is a retro artistic haven, Viña is a modern seaside hotspot abounding with sleek shopping centers and upscale restaurants. After touring around the city and waterfront, you'll return to Santiago in time for dinner.

Plan your trip to Chile
Chat with a local specialist who can help organize your trip.
Get Started

Day 3: A Bite of Santiago

Today you'll get out and explore on a half-day food tour of Santiago. It's an immersive experience that reveals the true beating heart of the city, which is found in its people, marketplaces, and cuisine. It's so informative, in fact, that by the end of it, you'll be an honorary Santiaguino.

Highlights of the tour include:

After the tour, you will return to your hotel and can spend the remainder of the day relaxing.

Today you'll experience even more of Chile's famous natural beauty with a visit to Cajón del Maipu. After breakfast, you'll embark on a 45-minute road trip southeast of Santiago to this popular gorge. You'll first arrive in the fertile San José de Maipo region, with its hills and vineyards. Then it's an ascent into the mountains and the landscapes become even more dramatic as massifs and snow-capped peaks dominate the skyline. That's to say nothing of the sparkling rivers and streams that wind through this paradise.

After reaching 3,000 meters above sea level (9,843 feet), you'll exit the vehicle at the shores of the Embalse de Yeso, a reservoir nestled in the Andes whose glassy surface shines bright turquoise. There will be ample time to marvel at this landscape and snap photos of the panoramic vistas. You'll also walk around the shore as your expert guide offers insight into the geology of the area as well as the history of the reservoir, a result of damming the Yeso River back in 1964.

For lunch, pull up a seat near the water and enjoy a picnic accompanied by a selection of top Chilean wine. Afterward, you'll return to San José de Maipo and stop in at a local restaurant to try a traditional Chilean empanada. Finally, you'll transfer back to your hotel in Santiago.

It's time to say farewell to Chile. In the morning, you'll transfer from your hotel to the airport in Santiago for your flight back home. ¡Buen viaje! 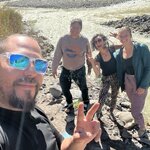 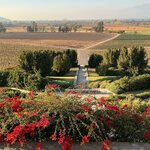 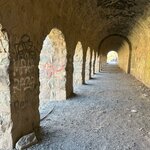 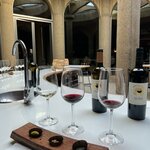 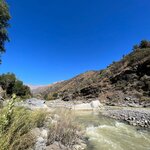 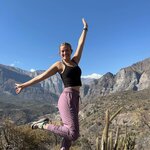 Kick off this 5-day Chilean sojourn in Santiago for a day of cultural...

If you want to experience some of the highlights of Chile but are...

Explore the incredible natural and cultural heritage of Easter Island on...

Do you ever get the urge to just drop everything and take a quick jaunt...
Chile 5-Day Tours & Itineraries

Chile’s capital is located right in the center of this long, thin...

Santiago de Chile is nestled in a bowl-shaped valley between the Andes...

If you want to experience some of the highlights of the Santiago region...

If you want to experience some of the highlights of Chile but are...

Do you ever get the urge to just drop everything and take a quick jaunt...
Best of Santiago

Spread across a multitude of hills carpeted with colorful homes and...

Have an alternative honeymoon with this biking and hiking adventure trip...

Cradled between mountains and sea, the Casablanca Valley's cool climate...

Indulge in some of the best urban and natural landscapes Chile has to...

This eight-day Chilean adventure begins in the capital, Santiago....
Best of Valparaiso

Spend four days taking advantage of the natural beauty of the town and...

This 10-day trip takes you into some of Chile’s most dramatic...

On this itinerary, you'll get to experience the two most beautiful...
Chile Tours & Itineraries

Make the Most of Your Time in Chile

How Many Days to Spend in Chile

Just because you only have five days in Chile doesn't mean you have to...

If you have a week to spend in Chile, take advantage of your time and...

With ten days in Chile, you have time to visit more than one region. On...

If you have two weeks in Chile, you can visit a range of diverse...
Make the Most of Your Time in Chile

Stretching for more than 2600 miles along the western side of South...

Best Things to Do in Chile

Top Highlights of Chile (and How to Do Them Differently)

The secret's almost out. Boasting some of the planet's most diverse and...

Top 10 Regions in Chile: Where to Go & What to See

A magnet for nature lovers, Chile has a little of everything, from...

Going Off the Beaten Path in Chile: 7 Places to Discover

There's so much to see and do in Chile. Getting off the beaten path—and...
Chile Travel Essentials

For Chileans, it doesn't get better than February (it's their favorite...

March is a great month to travel to Chile as the country transitions...

Chile's autumn is in full swing in April with cooling temperatures and...

Chile in May: Travel Tips, Weather, and More

May is a great month to enjoy this diverse, far-flung country. Crowds...
Chile Travel Advice

Top 10 Regions in Chile: Where to Go & What to See

A magnet for nature lovers, Chile has a little of everything, from...

Ultimate Guide to Easter Island: Moai & More off the Chil...

Adrift in the middle of the Pacific Ocean, this tiny volcanic island is...

In the far north of Chile, close to the Argentine and Bolivian borders,...

Chile’s capital is located right in the center of this long, thin...
Chile Destination Guides

How kimkim Trips Work in Chile

Chile is what travel dreams are made of. Star-gazing, road tripping,...

Kimkim has selected the best Chile travel agents so you'll have a...

If you have two weeks in Chile, you can visit a range of diverse...

Spend four days taking advantage of the natural beauty of the town and...

With ten days in Chile, you have time to visit more than one region. On...

How Many Days to Spend in Chile

From cosmopolitan Santiago to cosmic stargazing in the Atacama Desert,...

In 15 days, you can see the entire country on a fast-paced expedition...

On this 15-day adventure, you'll experience Chile's vibrant capital and...

Discover the reason so many travelers head south to Chilean Patagonia on...

Explore some of South America's most astonishing landscapes on this...

How to Get from Santiago to Valparaiso

How to Get from Santiago to Easter Island

Eric H.
Oregon, United States
"The core of our trip was seeing the Atacama Desert and visiting its important sites. Lorena was excellent in tailoring our plans to suit our interests and ti..." read more
Traveled to Chile as a couple in January, 2023

Malcolm S.
Canada
"The adventure was well designed and great choices were made by Lorena, I mentioned a cruise through the fjords of Patagonia and she came through with beauti..." read more
Traveled to Chile solo in January, 2023

Yana D.
Texas, United States
"We loved our trip to Chile! Every place was amazing- experiences was the best in every place! Hotel in San Pedro Atacama desert - la casa de Don Thomas was t..." read more
Traveled to Chile as a family in January, 2023

Vladyslav B.
Texas, United States
"The trip was amazing! Everything was planned so well and there was a great variety of experiences with nothing overlapping. It is hard to experience a huge c..." read more
Traveled to Chile as a family in January, 2023

Kim M.
Virginia, United States
"We ended up using Kimkim for an additional land based trip in Patagonia to compliment our Antarctica cruise, and most everything went off without a hitch. We..." read more
Traveled to Chile as a couple in January, 2023

Betsy R.
New Hampshire, United States
"What an amazing trip! Our daughter had been studying in Valparaiso for nearly 4 months and we traveled to Chile at the end of her semester to see where she ..." read more
Traveled to Chile as a family in December, 2022
G
Gina W.
Utah, United States
"Nara arranged the trip, which was smooth and timely. Our guide in Iguazu was Marco and he was so kind and patient with us and knew all the best views. Nori..." read more
Traveled to Chile as a couple in December, 2022
Create your custom-made trip to Chile
Get Started