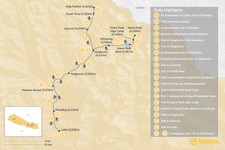 For experienced trekkers who want to try their hand at mountain climbing, or less-experienced climbers looking for a good challenge, Island Peak (6,189 m / 20,305 feet) is the perfect option in the Himalaya. The climb is challenging but not too technical. The spectacular trek to Island Peak follows much of the classic Everest Base Camp trek, and the panoramic views from the peak of the highest mountains in the world are unforgettable.

Imja Tse—known as Island Peak—is one of the most popular climbing peaks in the Nepal Himalaya. While the challenge of climbing any peak shouldn’t be taken lightly, Island Peak doesn’t require advanced climbing skills. Therefore, it’s an ideal first climb for experienced trekkers and novice mountain climbers.

Island Peak is near Mount Everest and affords amazing views of Everest and other giants from the summit. The trek there is also spectacular, and shouldn’t only be considered the warm-up to the summit attempt. The peak is located in the Imja Valley, which is reached after passing through the wilder trails of the Khumbu Valley, on the traditional Everest Base Camp trek. After flying from Kathmandu to Lukla, trek to Namche Bazaar, the bustling heartland of Sherpa culture, where you will need to spend a couple of days to acclimatize. Continue on to Tengboche, with its famous monastery where you can seek blessings from the head lama, and then on to Dingboche in the Imja Valley.

Spend another couple of days acclimatizing in and around Dingboche, then head to Gorak Shep, very near Everest Base Camp. From here, if conditions are good, climb to the top of Kala Patthar. This is a short but challenging climb of 2-3 hours, but will be good preparation (and acclimatization) for Island Peak in the next couple of days.

The ascent of Island Peak is mostly non-technical, and there will be time at base camp to refresh or learn new skills. Some prior snow climbing skills are needed. The summit attempt will be early in the morning. It is a challenging climb, and the altitude keeps the pace slow. But the views of Everest, Nuptse (7,879 m), Lhotse (8,501 m), Makalu (8,475 m), Baruntse (7,129 m), Amadablam (6,812 m) and other peaks make it a worthwhile and memorable expedition.

The return trip to Lukla retraces the route in but will be quicker due to the decreasing altitude.

This expedition can be varied by stopping at different points along the main Everest Base Camp trek. For instance, instead of trekking from Namche Bazaar to Tengboche, you could trek via Khumjung, a lively town with a beautiful old monastery that houses a ‘real life’ yeti skull. It’s also possible to complete the suggested itinerary faster by taking fewer acclimatization days in Namche Bazaar and Dingboche, and by not climbing Kala Patthar. However, the comfort and experience of the group should be considered, as it’s not worth risking altitude sickness.

Another variation is to combine Island Peak with Mera Peak by crossing the Amphu Labtsa Pass (5,780 m/ 18,963 ft), which makes for a very challenging but rewarding trek.

If you’re short on time, money is no object, and would rather shorten the return journey, you could arrange for a helicopter pickup at some point along the return route.

Other ideas for combining Island Peak with various treks and climbs in the Everest Region can be found in the article about unique Everest Base Camp itineraries.

As with most other treks in Nepal, the best times to do it are spring (March-May) and autumn (September-November). In these months the weather is likely to be clear, and daytime temperatures warm (at least at lower altitudes).

The most common way of getting onto the trail is to fly to the small airport at Lukla. Numerous flights are made daily from Kathmandu, in small fixed-wing airplanes, taking around 30 minutes. However, bad weather frequently closes the airport, so it’s wise to prepare for delays if flying to Lukla.

The alternative to flying to Lukla is to trek overland from outside Kathmandu, the “pioneers’ route” that connects to the trailhead at Jiri and passes beneath Lukla. However, this isn’t recommended as an addition to a long trip such as climbing Island Peak, as it lengthens the expedition by about a week.

This two-week tour of Bhutan and Nepal introduces you to the fascinating...

The hill-top town of Nagarkot is a popular short-break destination from...
Getting Around Nepal