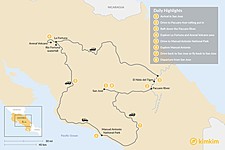 This fun weeklong itinerary highlights Costa Rica's amazing natural scenery through a thrilling series of adventurous activities including whitewater rafting, kayaking, zip-lining, and more. Starting in the nation's capital, you'll make your way to rivers, jungles, waterfalls, and cone-shaped volcanoes, culminating on the Pacific coast with time to relax on Manuel Antonio's four white-sand beaches—each one accessed by hiking trail.

Welcome to the land of pura vida! After arriving at Juan Santamaria International Airport in San José, you'll transfer to your hotel.

The rest of the day is free for you to explore the country's capital city. Suggested activities include:

Day 2: Drive to Arenal, Whitewater Rafting on the Sarapiqui River

After an early breakfast at the hotel, you’ll drive to the area surrounding Arenal Volcano National Park, home of the 5,437-foot-high peak that is one of Costa Rica’s most famed landmarks—and until 2010, the country’s most active volcano.

First though, you'll stop for a whitewater rafting adventure on the Sarapiqui River. After a lesson from your professional guide, you'll begin your two-hour journey down one of Costa Rica’s most exciting rivers with over 30 class three and four rapids. About half way through your trip, you’ll stop and watch the water from the shore while enjoying refreshing tropical fruit and a traditional, Costa Rican lunch. Then, after the second leg of the rafting journey, you’ll continue on to your hotel.

Today is packed with outdoor adventures, starting with a hike at Arenal Volcano National Park. An experienced guide will lead you along the trails to points where you'll get the best views of the volcano, pointing out local flora and fauna along the way and sharing the history of Arenal.

Next, you'll see Arenal from the water with a standup paddleboarding trip on Lake Arenal, Costa Rica's largest landlocked body of water. The lake is calm and pristine, making a SUP session here ideal for beginners or experienced boarders who want a leisurely paddle to take in the breathtaking scenery and spot water birds like herons and anhingas.

This morning, you'll transfer to the Pacific coast at Manuel Antonio National Park, where you can take your pick and wind down on one of the park's four beautiful beaches—some of the best in Costa Rica. If you're hungry for more adventure, you can also hike on one of the park's many trails (following the signs) and get up close to capuchin monkeys, sloths, and over 200 species of birds. Snorkeling is also accessible from multiple points along the beaches.

In the evening, head to the town of Quepos for dinner at Gabriella's for pretty sunset views over a meal of fresh fish or steak.

After breakfast at your hotel, you will have the whole day to enjoy one of Costa Rica’s most striking Pacific coast areas, starting with a two-person open-seat ocean kayak. The guided kayaking adventure begins near Pez Vela (Sail Fish) Marina in Quepos and winds along Manuel Antonio's coastline. There will be time to relax on the secluded beach of Biezans Bay, where you can go for a swim and enjoy a picnic on the sand. You'll also have the chance to see the area's gorgeous coral reef and marine life during a snorkel journey along the shore.

Want a special restaurant in Manuel Antonio?  Try Arbol Food & Wine. This is a concept based on seasonal products from Central Pacific farmers and fishermen, and the chef uses modern culinary techniques.

After breakfast at your hotel, the morning is yours to spend however you like. In the afternoon, you'll embark on a sunset dinner sail. Stop in a calm bay, drop anchor and swim while the crew prepares a feast. While you dine, you'll marvel at the sunset over the horizon while keeping an eye out for dolphins, sea turtles, flying fish, or even a breaching whale.

It's time to say goodbye to Costa Rica! After breakfast, you'll be driven back to San José where you'll depart for your journey home.

This two-week itinerary is perfect for eco-minded travelers...

How Many Days Should You Spend in Manuel Antonio?

Manuel Antonio National Park is a microcosm of many of the things that...

Manuel Antonio is a slice of paradise on Costa Rica's Pacific coast. A...

For sheer diversity, Manuel Antonio National Park has it all:...

Where to Dine in Manuel Antonio

How Many Days Should You Spend in Arenal?

Arenal Volcano National Park (along with the gateway town of La Fortuna)...

Where to Eat in La Fortuna, Costa Rica

After a day of trekking around the enormous Volcan Arenal, there are...

In the northern Costa Rican lowlands sits Volcan Arenal, a monolith that...

This mountain town needs no introduction to those familiar with the...
Best of Arenal/La Fortuna

C
Cosette M.
Indiana, United States
"This is my first time using KimKim. I was a little hesitant at first, but once I filled out the questionnaire and got matched with Green World Travel, we wer..." read more
Traveled to Costa Rica as a group in September, 2021
S
Shawn G.
Ohio, United States
"Adriana planned a GREAT honeymoon for us. She took our input and even gave us some recommendations of sights to see around Costa Rica. We will be recommendin..." read more
Traveled to Costa Rica as a couple in September, 2021

Alex V.
Washington, United States
"Randall created an amazing trip for us! COVID delayed our honeymoon last year, so this year was a make up honeymoon. I had a million questions and Randall wa..." read more
Traveled to Costa Rica as a couple in August, 2021
Create your custom-made trip to Costa Rica
Get Started