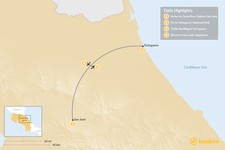 Tortuguero National Park is most famous as a sanctuary to nesting sea turtles—you can witness the babies hatch on the beach during this 4-day excursion to the Caribbean coast. After spending a day exploring San José, you'll make your way east to the untouched beaches of Tortuguero. Delve deeper into the park and paddle a canoe around its arterial waterways, keeping an eye out for plenty of other wildlife along the way.

Welcome to Costa Rica, the land of pura vida! After arriving at Juan Santamaria International Airport, in the capital of San José, a local representative will meet you and escort you to your hotel. The rest of the day you'll have free to explore the city at your own pace.

Take a stroll through Mercado Central (Central Market), the largest in the city, with over 200 shops, food stalls, and sodas (traditional restaurants). These sodas are perfect spots for an inexpensive lunch of casado—a local dish of rice, beans, and meat, served with tortillas. Then visit the Catedral Metropolitana (Metropolitan Church), whose interior combines Greek Orthodox, Neoclassical, and Baroque styles, and features wood carvings and stained-glass windows.

Be sure to explore Barrio Amón, a historic neighborhood home to cafetalero (coffee grower) mansions built during the late 19th and early 20th centuries. Many of this area’s historic buildings have been converted into hotels, restaurants, and galleries, making Amón a popular bohemian district. For dinner, you might want to opt for a restaurant in the hills of Escazú. This elevated region on the western edge of the city offers panoramic views of the valley below. No matter where you go, though, the whole city is filled with delectable restaurants serving everything from traditional local to forward-thinking fusion cuisine.

After breakfast, you’ll depart early in the morning for a half-hour flight to Tortuguero National Park, on the northern Caribbean coast. A driver will meet you at the airport and transfer you to the lodge where you will reside during your stay.

If you have the energy, take the remainder of the day to get out and explore. Tortuguero encompasses some 47,000 acres of mostly wetland area of the Caribbean coast. Networks of freshwater canals and rivers meander through the park and are thus the preferred mode of transport here. Some animals you'll likely spot in the area include howler and capuchin monkeys as well as exotic water birds like tiger herons.

Tortuguero is unique in that, unlike many national parks in Costa Rica, it almost exclusively revolves around the water. Today you'll hop in a canoe and navigate the network of arterial waterways that snake around this protected area. Keep your camera at the ready because you'll be on the hunt for various denizens of the reserve, including manatees, spectacled caimans, river otters, and rare birds. Among these, you'll likely spot macaws, toucans, and kingfishers.

Back on terra firma, you'll have plenty of time to explore Tortuguero's 22-mile expanse of beach. It's a favorite nesting area for three different species of turtle: the hawksbill, leatherback, and green sea turtle. All of these nest in the area from July through October (mostly at night), and seeing the mother turtles lay their eggs is an unforgettable experience. If you come from February to July, you'll spot the leatherback, which at 6 to 7 feet long and up to 1,500 pounds, is the largest sea turtle in the world.

Enjoy your last morning in Tortuguero. Take a stroll around the town or just a final dip in the hotel pool.

Then, it's time to head back to San José to catch your flight home.

This 4-day quick getaway allows you to experience a taste of the...

This quick-hit excursion to Arenal Volcano National Park offers an...

Great for travelers flying in and out of the Liberia airport, this 4-day...
Costa Rica 4-Day Tours & Itineraries

While the majority of visitors to Costa Rica will head west to the...

When travelers want to experience an even wilder side of Costa Rica,...

Perfect for travelers looking to hike and observe wildlife,...

Experience the best of Costa Rica's tropical flora and fauna on this...

On this 9-day trip, you will experience the best of the country's...
Best of Costa Rica's Caribbean Coast

Costa Rica is open to all international travelers without requiring a...

Most people visiting Arenal spend about 8 to 10 days in Costa Rica,...

Most people visiting Manuel Antonio spend about 8 to 10 days in Costa...

Eight to 10 days is the most popular trip length for Costa Rica...

There are a few great options for getting from the capital city of San...

Kate B.
North Carolina, United States
"I had a great experiencing using KimKim for my Costa Rica trip! It was so nice to have kimkim take care of everything and Costa Rica was amazing! We will use..." read more
Traveled to Costa Rica as a group in December, 2020

James M.
Texas, United States
"We loved our trip that was arranged for us. Randall did a great job. The top site seeing areas were seen plus they booked us in really nice rooms. That were ..." read more
Traveled to Costa Rica as a couple in February, 2021

Rani R.
Florida, United States
"At first I was alittle hesitant to try a traveling agency to help put together my first trip in a long time. I’m glad I made the decision and tried Kim Kim. ..." read more
Traveled to Costa Rica as a couple in February, 2021
Create your custom-made trip to Costa Rica
Get Started