From fjords to mountains, waterfalls to fishing villages, Norway is as picturesque as a country can be. More and more travelers are discovering the offerings of this Scandinavian nation, but most stick to the tourist track. Head off the beaten path to find solitude and scenery in these lesser-known locales. 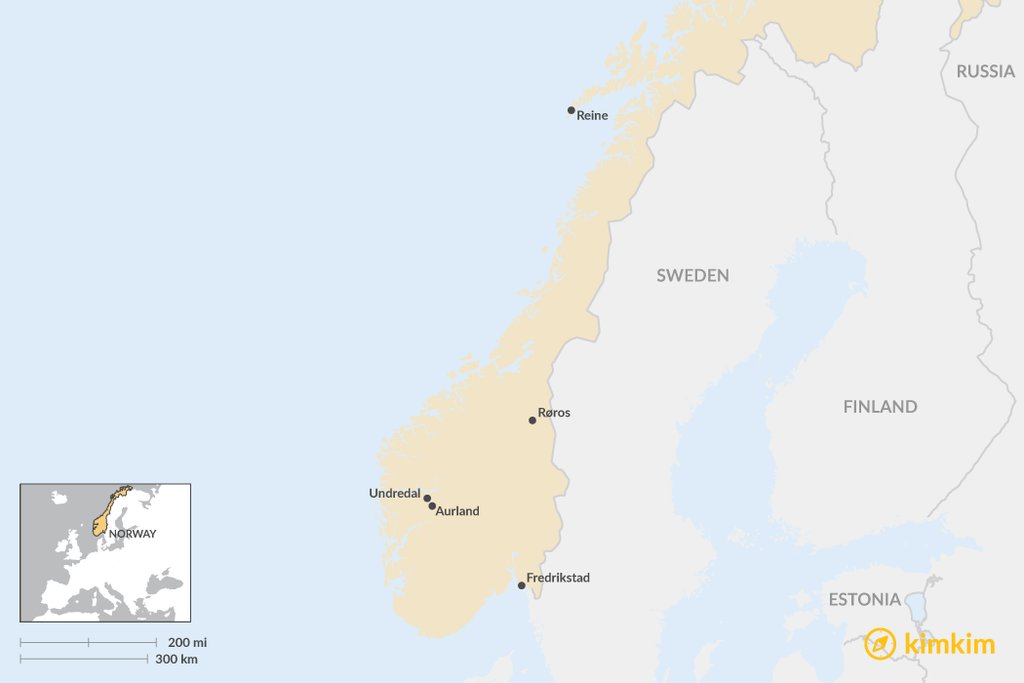 While any traveler heading to Norway will likely stop in Oslo, Bergen, or Trondheim — and maybe even Tromsø or Ålesund — it's the small towns that will make you want to return. The country is dotted with quaint, worthwhile getaways in spectacular locations, with easy access to the natural wonders that Norway is known for. Here are five hidden gems that most tourists miss (but definitely shouldn't).

You might've heard of the Flåm Railway, often referred to as one of the prettiest train rides in the entire world. As a result of its reputation, the town of Flåm - the terminus of the line - is quite a hectic place. Instead of hopping off the train here, head six miles north to Aurland. It sits at the end of the Aurlandsfjorden, the world's deepest fjord, and the Aurland Valley is often referred to as "Norway's Grand Canyon." That's code for the town being surrounded by dramatic cliffs and waterfalls, both pouring into the tranquil waters of the fjord below. In Aurland, you'll get the same amazing experience as you would in Flåm, but without flocks of tourists slowing everything down.

While there, go up to the Stegastein Viewpoint, hike in the mountains of the Aurland Valley (from Geiteryggen, it's a four-hour hike to the well-known Steinbergdalen), and end it all with a stop at Aurlandskafeen for a cup of true Norwegian coffee.

One of the oldest "wooden towns" in all of Europe, all of Røros is a UNESCO World Heritage Site (conveniently located on the train line). The narrow streets are the same as they were in the 1600s, and as you wander through town, it'll feel like an intricate maze of alleyways and courtyards that never ends. Stop by Olav's Mine to see how the town originated, head down into the cellar of Rammkjellarn for local fare and on-site brews, and if you're visiting in winter, rent a kicksled to get around the snowy streets. Don't worry — you'll blend right in.

If jagged, snow-capped mountains were slowly getting swallowed by the sea and a few stubborn fisherman decided to build a town anyway, that would be Reine. The colorful cottages and winding streets almost seem to fall away into the water — Reine is in the Lofoten archipelago — but not before the land rises again, granite jutting thousands of feet into the air. This place is a postcard if ever there were one.

If you're looking to explore the Lofoten Islands, Reine is an obvious stop. It's located right on E10 (the scenic drive through the islands), the village is quiet, and the scenery is unparalleled. Leave time to hike Reinebringen — the steep scramble will lead you to one of the most panoramic points across the islands.

Five hundred years ago, Fredrikstad operated as a fortress, and it's now one of the best-preserved across all of Scandinavia. From above it still looks like a perfect six-pointed star — moats much like the canals of Amsterdam or Copenhagen surround the Old Town, a perfect place for grabbing a patio-side coffee or looking through local art galleries that almost always come with a view.

A free ferry runs from downtown to Old Town several times a day, and it's an easy way to get some great views from the water. Otherwise, the nearby Hvaler Islands are one of the sunniest places in the country and worth a stop once you get your fill at the many cafés (check out Café Oline for a nice glass of vino), museums, and boutiques.

Apart from being a picturesque fishing village on the edge of a fjord (like many of Norway's amazing towns), Undredal has two claims to fame: its stave church and brown cheese. The former was built in the 1100s, and yet you could only get to the town by boat up until 1988.

And brown cheese, or brunost, may not seem notable, but you haven't had Norwegian cuisine until you've experienced it. Undredal's variety is widely regarded as the best in the country - the ratio of goats to people is 5:1 - and it's a must-try. Slightly sweet and heavy, it's usually eaten on sandwiches or with Norwegian waffles. If you're not a fan, give brown cheese ice cream a try: it's like caramel, but smoother and a little less sweet. Check out Undredalsbui to get your hands on some samples of this iconic Norwegian staple, and be sure to grab extra to take back home.

Off-Season Highlights of the Lofoten Islands

The word is out on the Lofoten Islands, especially in summer. Traveling...
Norway Travel Advice

Travel above the Arctic Circle with this relaxed two-week family...

Immerse your family in Norway’s cultural history and native wildlife...

Looking for the family-friendly Norwegian adventure of a lifetime?...

Immerse your family in Viking history during this 10-day road trip...

For families seeking adventure and wildlife amid the beauty of Norway's...

Laura W.
Tennessee, United States
"Amazing trip! We loved everything about Norway and couldn’t have asked for a better experience. My husband and I have traveled extensively and used several t..." read more
Traveled to Norway as a couple in January, 2023

Michaela P.
Australia
"Christina did an absolute job planning our trip in Norway. It was absolutely perfect from beginning to end. She answered every question I had no matter how c..." read more
Traveled to Norway as a couple in January, 2023

Mary H.
Louisiana, United States
"This was an amazing trip! Christina was there for me the whole way making lasting minute adjustments for me as life happened with delayed or missed flights. ..." read more
Traveled to Norway as a couple in January, 2023

Gerri S.
Oregon, United States
"I apologize for the late review for this trip to Norway. We enjoyed every minute of the trip and we were able to rely on the help of our guide and communica..." read more
Traveled to Norway as a group in October, 2022

Saravanan K.
Singapore
"Thank You Meree for planning our Norway trip. Apart from the fact that we fell ill largely due to the harsh cold winter, we had great fun and enjoyed our va..." read more
Traveled to Norway as a group in December, 2022
Create your custom-made trip to Norway
Get Started