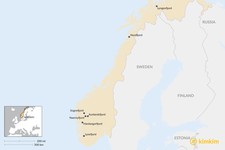 There is perhaps no place on Earth that can rival the beauty of Norway's fjords — as if Odin himself carved out mountains, splattered waterfalls on his canvas, and then flooded his own work into the Norwegian Sea. Each spot will seem more beautiful than the next...so where do you choose to start?

Giant glacier tongues licked these mountains time and time again across millions of years, leaving us with the incredible panoramas we marvel at today. The entire west coast of Norway is a maze of waterways, waterfalls, cliffsides, and mile-long views, and any amount of time here won't seem like enough. To get the most out of this jam-packed region, check out the guide below.

Which Fjords Should I See?

There are over a thousand fjords along the coast, but a few tend to make it onto postcards more than others: Geirangerfjord, Naeroyfjord, Aurlandsfjord, Lysefjord, Sognefjord, and Hardangerfjord are the heavyweights in this fight.

The Geirangerfjord is one of the most popular — along with the Naeroyfjord, it's on the UNESCO World Heritage list. To no one's surprise, there's several awesome waterfalls here (namely De Syv Søstre and Friaren), and abandoned farms dot the 10-mile-long landscape. You can view it all from Dalsnibba, about 5,000 feet in the air. (You can take the famous Trollstigen mountain road to get here, too.)

The Naeroyfjord is one of the narrowest and most dramatic fjords, making it one of the most stunning and well-known spots on this list. Its cliffside rises nearly 6,000 feet in the air, and seem like giants towering above you if you take in the scene from a boat or kayak. Most scenic tours have the Naeroyfjord as part of its itinerary.

The Aurlandsfjord is home to Flåm, Aurland, and Undredal (all towns worth stopping in), the former being the namesake of the Flåm Railway. Also regarded as one of the most beautiful, the Aurlandsfjord is also included in most tours, like the Norway in a nutshell tour.

The Lysefjord — the southernmost of the notable fjords and closest to Oslo — has two big claims to fame: Pulpit Rock and Mount Kjerag. You likely have seen both: Pulpit Rock is that flat-edged cliff you've seen on so many Instagram feeds, and Mount Kjerag has a boulder wedged between two sides of its cliffs, 3,000 feet in the air. (Bonus: The world's longest staircase is here, with 4,444 steps.)

The Sognefjord is the country's longest and deepest, and it snakes along the cliffs for 120 miles. At its end, you'll find Jostedalsbreen, the biggest glacier in all of Europe. "The King of the Fjords" is an easy hop from Bergen (the Naeroyfjord is actually one of its arms), and here you'll find yourself close to Jotunheimen National Park, Flåm, Balestrand, and Solvorn.

The Hardangerfjord is second only to the Sognefjord in terms of length and grandiosity (earning it the title "Queen of the Fjords"). 110 miles long, it's close to Trolltunga (the famous "Troll's Tongue), Folgefonna National Park, Steinsdalsfossen, and the quaint towns of Jondal and Sundal.

Which Fjords Avoid the Crowds?

If you're looking to stay away from the crowds and long lines (especially in summer), check out the Nordfjord and the Lyngenfjord. The Nordfjord, as its name implies, is a bit further north — and most people just don't bother to make the trek. There are tons of old fishing communities that date back to the Viking era here, the Briksdalsbreen glacier is a particularly picturesque shade of blue, and Hornindalsvatnet, Europe's deepest lake, calls the Nordfjord home.

The Lyngenfjord, on the other hand, is even further north, near Tromsø. This is a slightly different experience, since you're up in the Arctic Circle. Here, Fjord Norway means the Lyngsalpene mountain range, glaciers, lush valleys, the midnight sun, Sami culture, and — most importantly — the Northern Lights.

How Should I Get Around?

In terms of getting around the fjord region, renting a car is about as straightforward as it gets — though if you can't, the country's bus and train system will take you just about anywhere you want to go. There are also tons of fjord cruises (passenger boats between Gudvangen, Aurland, and Flåm run all year) and ferries (after all, the fjords are the "road") that will keep you on the water surrounded by amazing views in every direction. Just keep in mind that the most popular ones, like Geiranger–Hellesylt and Lauvvik–Lysebotn, will likely have long lines in summer.

Hurtigruten is the famous coastal steamer that'll take you just about anywhere along the coast, and there's other smaller outfitters (like Beffen in Bergen or the long list around the Lofoten Islands) that keep things flowing. Once you're where you want to be, look to kayaking or hopping aboard a high-speed RIB (Rigid Inflatable Boat) to get around the waters — taking a RIB around the Lysefjord is especially notable.

Where Should I Stay?

You could day trip from Bergen (or stay up in Tromsø if you're further north), but you'll get a more immersive experience if you opt for one of the area's small towns or villages. Which one you choose is entirely dependent on where you are, obviously, but you'll never be too far away from a quaint farm or lodge, regardless of where you are.

As for ideas, consider spending a night in Solvorn and taking the ferry to Urnes Stave Church (the oldest in the country). Spend a night above the Geirangerfjord and watch as the crowds slowly disappear. Cross to Undredal from Flåm and taste some of the best goat cheese in the world. Get your hands dirty on one of the many farms or sleep in a tent atop Trolltunga. Photograph the famous apple tree blossoms of Ulvik, or read by the fireplace at a cozy lodge in Jondal. If you can, just take it slow.

When Should I Visit?

There is never, ever a bad time to visit Norway. But, yes - each season has its pros and cons: Summer has the best weather, but the crowds reflect that. Spring and autumn can be chilly with shorter days, but in each the mountains bloom with their respective colors. And, of course, in winter, you'll practically have the fjords to yourself.

How Long Do I Need?

As long as you can muster. When you absentmindedly spend hours staring into the water, trying to fathom its beauty, you might find yourself running a bit behind schedule. Keep in mind that the terrain here makes travel time deceptively long. Crowds in summer will slow you down, and ferries run on their schedule, not yours. But you'll want to go slow to take it all in and match pace with the water, so consider it all a gentle reminder: Fjord Norway wants you to stay.

Norway's stunning coastline should not be skipped despite the cold and...

Visiting Norway's beautiful fjords in March will bring a touch of spring...

Spring has arrived in Norway’s fjords with melting ice, rushing...

Norway's Fjords in May: Travel Tips, Weather, and More

May is a remarkable month for visiting Norway's fjords. Sandwiched...
Best of Norway's Fjords Region

You’ve probably heard of New Nordic cuisine, but that’s only the tip of...
Norway Travel Advice

This 13-day Nordic adventure delivers the highlights of western and...

With a backdrop of colorful foliage and fewer crowds, autumn is the...

The 3 Best Boutique Hotels in Oslo

Choosing a boutique hotel in the fast-growing capital of Norway gives...

Cross the Arctic Circle in comfort on this unforgettable 15-day journey...

Hike through some of Norway's most spectacular landscapes on this 8-day...

There are several ways to travel from Trondheim to Lofoten, a distance...
Getting Around Norway

Jay S.
New York, United States
"Great job. We had a blast Julia did a super job arranging everything and was extremely accommodating " read more
Traveled to Norway as a group in September, 2022

Sudhir M.
India
"We have wanted to go to Norway for a long time to see the Fjords.We got great advise , where to go what to do from Tom. the planning stage was extensive wit..." read more
Traveled to Norway as a couple in August, 2022
C
Charles K.
Maryland, United States
"We just returned from two weeks in Norway and it was an incredible trip mainly thanks to Julia and her team at KimKim. Julia suggested places to us that we h..." read more
Traveled to Norway as a group in August, 2022
Create your custom-made trip to Norway
Get Started