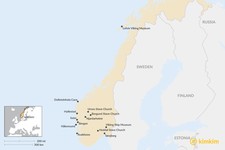 A thousand years ago, Norway's influence stretched across all of Europe — did you know that even Dublin was a Viking town? Now, its surprisingly global past can still be seen in its landscape, museums, and churches. Here are just a few of Norway's best historical experiences.

Wherever you travel in Norway, you're bound to be close to an unforgettable experience transporting you back to the past. The country has a rich woven history, evident in its preserved Viking villages, iconic wooden stave churches, and countless museums dedicated to its complex and fascinating culture. Whether you head to Oslo to view the oldest Viking ship in Norway, or the Lofoten Islands to enjoy one of their many festivals, there are endless opportunities to learn and enjoy the country's history.

It's western Norway that's known as the Viking homeland — both Bergen and Trondheim were once capitals, and many western towns and cities are older than Oslo. You probably know that the Vikings were sailors, so it makes sense that they would set up on the water, not too far away from their hubs in England, Scotland, and Ireland. If you're staying in Bergen, be sure to visit the Bryggens Museum — where you'll see foundations of some of the oldest buildings ever constructed in the city — the Bergen Maritime Museum, and, of course, the Hanseatic Museum in Bryggen. Out of the city, though, is where you'll truly get off the beaten path.

Start off with a stop at Håkonsund. It's on Sotra, one of the islands outside the city, and it's where Håkon the Good (King of Norway from 933 to 961 AD) lived and died. Back on the mainland, visit the Viking Farm at Spurkeland in Seim. There's two Viking ships, the Hårek and the Gyda, that you can set sail on, in addition to Viking houses and artifacts to explore. Rumor has it that Håkon the Good, Harald Fairhair, and Eirik Blodøks all had farms in this area.

A bit further from Bergen (but still an easy drive), you'll find Njardarheimr, a Viking village near Flåm. If you want true immersion, this should be your stop — think tasting classic "Viking" recipes, rowing your own boat, awesome guided tours of the grounds, and perusing traditional handcrafts at a Viking market.

Around the Fjord Coast

Around five hours south of Bergen on the fjord coast is Avaldsnes, near Haugesund. It was once the royal seat of the country and residence of Harald Fairhair — this is widely considered the birthplace of Viking Norway, and nowadays it's home to the Nordvegen History Centre and Viking Farm. Currently excavations are going on, where remnants of one of the oldest Viking settlements in the world is believed to be surfacing. In addition to the center and farm, the church, replica houses, and grounds are all open to visitors, too.

Millstone Park, in Hyllestad, is a great stop to get your hands dirty. You're invited to bake bread, grind grain, or make soapstone jewelry — just like the Vikings did in their time. Afterward, hop back into the car and into the 21st century, heading for the islands of Utvær, the westernmost islands in the country. You'll take a guided tour from Hardbakke, spending the day touring the island, the lighthouse, and revisiting Viking history. Look for the marks on the mountainside on the east side of the bay: Legend has it these marks are where Viking soldiers once sharpened their swords.

With time to spare, try to see Dollsteinhola Cave in Sandsøya, one of the largest in Norway. Bring a jacket — it can get chilly in the cave's passageways and rooms. Many myths say treasure is buried here...will you find any?

In general, Oslo is an incredibly modern, world-class European city. You won't find Viking farms here, but you will find the best-preserved Viking ship in the entire world at the Viking Ship Museum, or Vikingskipshuset (admission includes entrance to the Historical Museum as well). And in April 2018, the museum is exhibiting “The Viking Age is Alive." The hands-on experience includes a virtual-reality-like movie shown on the walls and ceiling of the building, transporting visitors to another time — in 3D.

Bonus: An hour south of Oslo lies Tønsberg, one of Norway's oldest cities. If you can time it right, get there in September for the Tonsberg Viking Festival and see the world-famous Oseberg, a Viking ship rediscovered from the waters in 1904.

On the Lofoten Islands

Oslo may have the most impressive ship, but the Lofotr Viking Museum, in Borg, has the world's largest reconstructed traditional Viking longhouse. Apart from touring the ancient grounds, visitors are invited to sail in a reconstructed Viking ship and take part in a traditional Viking feast (over the open fire, of course). And if you're lucky, a festival will be going on — the museum hosts many throughout the year.

Norway's history isn't only Viking, of course. If you want to get into the more authentic, slower, more rural side of life, book a stay at one of the hundreds of farms open to visitors throughout the country. Some specialize in organic farming (where you're invited to help out!), while others are "medieval," and yet others are simple cabins or cottages whisking you away to the mountainside. For thousands of years, the country existed on farming and fishing, and in many places not much has changed. You don't need a guided tour to get the most of a place — sometimes the best cultural experiences are just slowing down and taking it all in.

Though these hand-carved wooden structures used to span across all of Northern Europe, nowadays the Stave Churches of the Middle Ages are largely associated with Norway. Many have pre-Christian symbols that date back to the Viking era — you may even spot a dragon or two.

A few of the most famous of the 28 still standing are Heddal Stave Church, the country's largest; Borgund Stave Church, arguably the most distinct and well-preserved; and Urnes Stave Church, the country's oldest. Heddal was built in the 1200s and is still in use today, where English-language tours are conducted almost daily. Borgund is home to art exhibits and a nice visitor center to help the history sink in. Urnes, to take the cake, is a UNESCO World Heritage Site — it was built around 1130. However, if you want an experience a bit more off the beaten Instagram path, check out Hopperstad, Høre, Hedalen, Flesberg, Lom, or Ringebu Stave Churches, all worthy of your time (and a great way to get acquainted with Norway's complex history).

Off-Season Highlights of the Lofoten Islands

The word is out on the Lofoten Islands, especially in summer. Traveling...
Norway Travel Advice

Travel above the Arctic Circle with this relaxed two-week family...

Immerse your family in Norway’s cultural history and native wildlife...

Looking for the family-friendly Norwegian adventure of a lifetime?...

Immerse your family in Viking history during this 10-day road trip...

For families seeking adventure and wildlife amid the beauty of Norway's...

Laura W.
Tennessee, United States
"Amazing trip! We loved everything about Norway and couldn’t have asked for a better experience. My husband and I have traveled extensively and used several t..." read more
Traveled to Norway as a couple in January, 2023

Michaela P.
Australia
"Christina did an absolute job planning our trip in Norway. It was absolutely perfect from beginning to end. She answered every question I had no matter how c..." read more
Traveled to Norway as a couple in January, 2023

Mary H.
Louisiana, United States
"This was an amazing trip! Christina was there for me the whole way making lasting minute adjustments for me as life happened with delayed or missed flights. ..." read more
Traveled to Norway as a couple in January, 2023

Gerri S.
Oregon, United States
"I apologize for the late review for this trip to Norway. We enjoyed every minute of the trip and we were able to rely on the help of our guide and communica..." read more
Traveled to Norway as a group in October, 2022

Saravanan K.
Singapore
"Thank You Meree for planning our Norway trip. Apart from the fact that we fell ill largely due to the harsh cold winter, we had great fun and enjoyed our va..." read more
Traveled to Norway as a group in December, 2022
Create your custom-made trip to Norway
Get Started