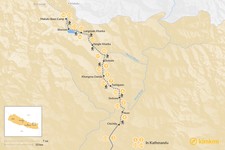 The Makalu Base Camp trek is a remote route that encompasses some of the best that Nepal has to offer — quiet trails, vibrant terraced farmland, rural cultures, rhododendron forests, rare wildlife and several 8,000 meter-plus peaks. For experienced trekkers who relish a challenge, this is a great trek with ample rewards.

Makalu is the fifth highest mountain in the world (8,481m), yet the trek to its base camp is a less-frequented route due to its relative inaccessibility. However, it’s not too hard to reach, as there are daily flights to Tumlingtar (which is a few hours’ drive from the trailhead) and basic lodges along the way.

The Makalu Base Camp trek is an ideal trek for nature-loving trekkers who want to experience a variety of landscapes and cultures, as well as uncommon views of some of the world’s tallest mountains, including Everest.

The trek starts in warm, terraced farmland inhabited by the Rai people, an ethnic group found predominantly in the hills of eastern Nepal. As the route ascends, you will pass through rhododendron forests (most impressive in the spring, when the flowers bloom amazing red, purple, pink and white) and cloud forests, through some of the last areas of pristine forest and alpine meadows in Nepal.

Deeper into the mountains, past the Barun River Valley, you will pass steep granite cliffs, glaciers, and spectacular waterfalls. At the higher elevations live the Sherpa people, an ethnically Tibetan group who predominantly reside near Everest.

From Makalu Base Camp there are spectacular views of the rarely seen Kangshung face of Everest, as well as Lhotse, Chamlang, and Kanchenjunga in the far east. The Makalu Barun National Park is the eighth largest in Nepal, covering 2,330 sq. km, and is home to some of the rarest flora and fauna in Nepal, including the Red Panda.

A rewarding alternative route is to continue from Makalu Base Camp towards Everest. After exploring around Makalu, cross the Sherpani Pass over to Baruntse Base Camp, then cross the West Col to Panch Pokhari, Amphu Laptsa and the Amphu Lapsta pass (5,850 m./19,192 ft.) into the Everest region.

From then, follow part of the traditional Everest Base Camp trekking route, passing through Pangboche, Namche Bazaar and Lukla, from where you would get a return flight to Kathmandu. This would add about a week onto the itinerary, and would mean seeing fresh landscapes the entire way, not repeating your steps.

Mountaineering experience is required for this variation, as ropes are necessary on some passes and glaciers.

The spring (March-May) and fall (September-November) trekking seasons are the best times for the Makalu Base Camp trek, as the weather is likely to be finest and the temperatures good (particularly at low and mid-elevations). It is possible to do this trek in the winter months, but the cold temperatures might be a drawback, especially as the lodges in this region aren’t especially well equipped.

The Makalu Base Camp trek requires a one-hour flight from Kathmandu to the small airport at Tumlingtar, around 500 kilometers east of the capital. Buddha Air and Yeti Airlines operate one daily flight each.

If taking the alternative route from Makalu Base Camp onwards to Lukla, a return flight from Lukla to Kathmandu is required. Multiple flights operate daily.

This is a challenging trek, best suited to experienced mountain trekkers. Comfort levels are more basic than on some popular Nepal treks, as the lodges in this area are of a lower standard than some other places. However, as a couple of rest/acclimatization days are built into the itinerary, this trek is not extremely challenging.

The alternative route from Makalu Base Camp onwards to Everest and Lukla requires mountaineering experience, so could be categorized as very challenging.