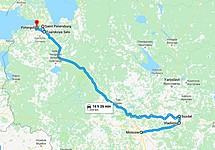 Visit Russia's iconic capital, see 16th-century onion-domed wooden churches, and discover European art and architecture in St. Petersburg. Start in Moscow and explore history in the Kremlin, see the Red Square, and ride the 90-year-old-metro. Take a train to Vladimir and Suzdal to see small-town life, then continue to St. Petersburg to see the world-famous Hermitage art museum, winding city canals, and the sprawling Peterhof estate.

In the morning, head to the city center for a visit to the Red Square, the onion-domed St. Basil's Cathedral, and a chance to see the Kremlin—the home of the Russian government—up close. This medieval fortress is one of the few in the world still functioning in its original intended purpose as a government and military center.  In the afternoon, join a tour to see inside the Kremlin walls or explore on your own. Stop inside the GUM—the government department store—located opposite the Kremlin to see a Soviet-era shopping center.

Spend the morning exploring the older parts of Moscow. Start with a visit to the remaining sections of the Kitai Gorod wall and learn about how the largest city in Europe defended itself against invasions. From here you can walk the medieval sections of Moscow, although many of the buildings you see were built in the 18th-20th centuries. Stop by the Romanov Boyar house to see a museum devoted to the Russian nobility's lifestyle during the 16th-17th centuries. From here head out to the 17th-century Krutitskoye Podvorye, a restored Orthodox estate and personal metochion of the church leadership.

Day 5: Kolomenskoye park and the Wooden palace of Tsar Alexei

Head to the open-air museum of Kolomenskoye, which was built as a hunting preserve for the Tsars and has been rebuilt to depict traditional buildings from the 16th-18th centuries. The star is the unique 17th-century wooden palace of Tsar Alexei, as well as the early 16th-century Ascension Church of Ivan the Terrible's legendary rule.

Get an early start with a 2-hour train trip to nearby Vladimir, one of the cities on the Golden Ring—a circle of historic cities surrounding Moscow. Vladimir has preserved much of its medieval architecture and old-world charm. You'll see onion-domed churches, medieval monastery walls, traditional wooden homes, and ancient city barricades. Visit the Golden Gates and see the nearly thousand-year-old sculptures and icons housed in the church, then grab lunch at a cafe in town.

Continue the half-hour trip to Suzdal, stopping on the way to see the Church of the Intercession on the Nerl, considered the most elegant example of medieval Russian architecture.

Today you will explore the town of Suzdal, one of the cities on the Golden Ring. Visit the centuries-old Kremlin, then explore the wooden architecture museum and see restored peasant huts and wooden churches to get a sense of life in the 19th century. Enjoy the slower pace of life in a timeless rural atmosphere where the pressures of big-city life subside.

In the afternoon transfer back to the Vladimir train station to catch the local train back to Moscow.

Today is a free day to explore the city on your own. Visit one of the city's many parks, explore the bustling downtown, or see where Soviet Russia meets modern-day luxury inside the Detsky Mir—The Children's Department and Toy Store. For a bird's-eye view of the Moscow skyline, head to the top floor, stopping by the exhibit of old Soviet toys on the way.

Your tour of the city today will include iconic highlights—from the Kazan Cathedral to the Academy of Sciences—as well as numerous cathedrals, notable buildings, and the expansive Nevsky Prospekt.

After a break for lunch, head across the river to the imposing 1706 Peter and Paul Fortress—the city's original citadel. Tour the grounds and learn about its history a political prison and as a burial ground for Russian Tsars.

Spend the morning touring the countryside estates and palaces favored by the Tsars during the 18th-20th centuries. Start at Tsarskoye Selo—The Tsar Village— so called because of the many palaces that are located there. Visit the stunning 18th-century Rococo style Catherine Palace and the ornate Amber Room.

After lunch, go for a relaxed river tour of the city's many winding canals. St. Petersburg is built on 42 islands and is surrounded by a complex web of rivers, canals, channels, and a bay. You'll get great views of the 18th through 20th-century architecture from your seat in the riverboat, as well as local landmarks and famous statues.

Today is a free day to explore the city on your own. Spend the day touring one of the many museums and art galleries, or simply stroll around down one of the numerous canals and waterways.